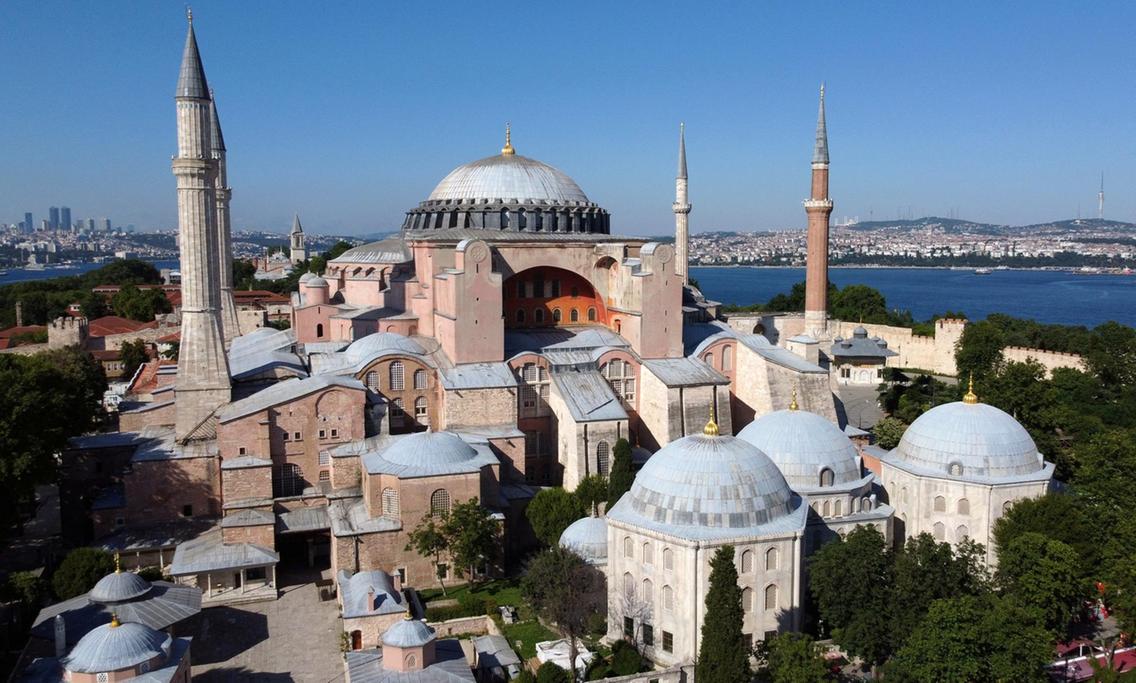 Turkey’s president Erdogan declares iconic cultural heritage site Hagia Sophia reopen to Muslim worship after a court ruling. This iconic cultural heritage site turned again into a mosque after 86 years. The first prayer will be performed on Friday, 24 July. Furthermore, Erdogan Explains that they have removed the paid entrance to the Hagia Sophia Mosque. He added: “Like all our mosques, the doors of Hagia Sophia will be open to everyone, local and foreign, Muslim and non-Muslim.”

President Recep Tayyip Erdogan’s administration took a historical step in a snub to the international community. When a government-pliant court ruled in favor of the proposal to declare Hagia Sophia a mosque again on Friday. A century-old longing for restoring its status finally materialized, to a mixed sense of joy and despair on opposing sides of the story.

For all the joy it sparked, Erdogan’s bold move was not without controversy. The government presented it as a historical correction of a wrong done by the early republican regime. Yet, in the eyes of many people, populism and political investment were the main drivers of the president’s snub of the international community when took that historical step.

Turning Hagia Sophia Into Mosque Again Is The Legal Sovereignty Of Turkey. In this regard, Erdogan said: “Everybody, I invite our country to respect the Hagia Sophia decisions taken by the executive and judicial organs, We understand of course every kind of opinion put forward in this regard in the international arena. However, Sophia’s what purposes subject to use Turkey’s sovereignty, rights In this regard, we regard all kinds of attitudes and expressions beyond expressing opinions as a violation of our independence. “

Reason Of The Decision.

The reason for the decision to abolish the decision of the Council of Ministers, dated November 24, 1934, which made Hagia Sophia a museum, and removed the obstacle to worship.

There is no doubt that this issue is binding for the defendant administration together with all real legal entities. The immovable property belonging to the foundation, which has been preserved since ancient times. It has been left to be used in line with the foundation of the foundation, that one cannot stop from being used by society. It is constantly allocated in the foundation deed, and that it is not legally possible to use it outside of the mosque qualification and it is not possible to legalize it. The decision of the Council Of the Minister was unjust, that sais to end Hagia Sophia as a mosque and turn it into a museum.

The Turk government also considered the perception of Christians. Erdogan clears the misconception by saying the following words.

“The right of the Turkish nation on Hagia Sophia is not less than the first builders about 1,500 years ago. On the contrary, our nation’s right over Hagia Sophia, is one of the most important works of human heritage, is more in our country. There are 435 churches, synagogues, and synagogues open for worship. This view is the manifestation of our understanding that sees our differences as wealth”

Reactions From The World On Hagia Sophia.

In remarks to BBC, Nobel Literature Prize winner Orhan Pamuk expressed his dismay. “There are millions of secular Turks like me who are crying against this but their voices are not heard.”

Professor Hayri Kirbasoglu, a theology professor at Ankara University shares his thoughts. “The moves as a revanchist and populist decision that would create a lot of headaches for Turkey at home and abroad.”

Omer Faruk Gergerlioglu, a lawmaker from pro-Kurdish People’s Democracy Party (HDP), was blunt in his criticism of the latest move. He said: “In the country, there is no state left, never to speak of a state with the rule of law. When we look at the world criteria, the world indexes; Turkey has relegated to the Africa league in terms of the rule of law, judicial independence, democracy, and media freedom. What does the government do? They turn Hagia Sophia to a mosque. What does it do? It seeks to deceive people by using the religion against (another religion)”

The first statement made in the USA is: “The change of the status of Hagia Sophia is disappointing”.

The U.S. Department of State made statements regarding Hagia Sophia. After the decision of the 10th Department of the Council of State, on the order of President’s decision published in the Official Gazette, this statement reopened for worship. A statement from the Ministry, “the Turkish government have suffered the disappointment due to changing the status of Hagia Sophia. Turkey’s Hagia Sophia everyone can access impatiently steps of learning will take to ensure that we continue to be a place you expect”.

The first reaction from Greece was to cancel the decision of the Council of Ministers. the Greek Ministry of Culture said: “The Hagia Sophia decision is a provocation against the entire civilized world”. “This nationalist behavior of Erdogan took his country 600 years back,” said Greek Minister of Culture Lina Mendoni.

“Deeply regrets the decision of the Turkish authorities, made without prior discussion. And calls for the universal value of #WorldHeritage to be preserved.”

Whatsoever the reaction of the world would be. I think that turning any building into the national religion of the country is the legal right of the country. As far as the concern of tourism and cultural heritage of the world, so this mosque will still open for all non-muslim too. Now criticizing the decision of Turkey government and blaming them for chauvinism is useless at all. As a Muslim, we should appreciate this step of Turk Government for making Hagia Sophia a mosque again. And as being a sensible person in the world, we should respect the legal sovereignty of Turkey.

Color Psychology: What does it say about different personality types?
How To Find The Right One For Life?
To Top