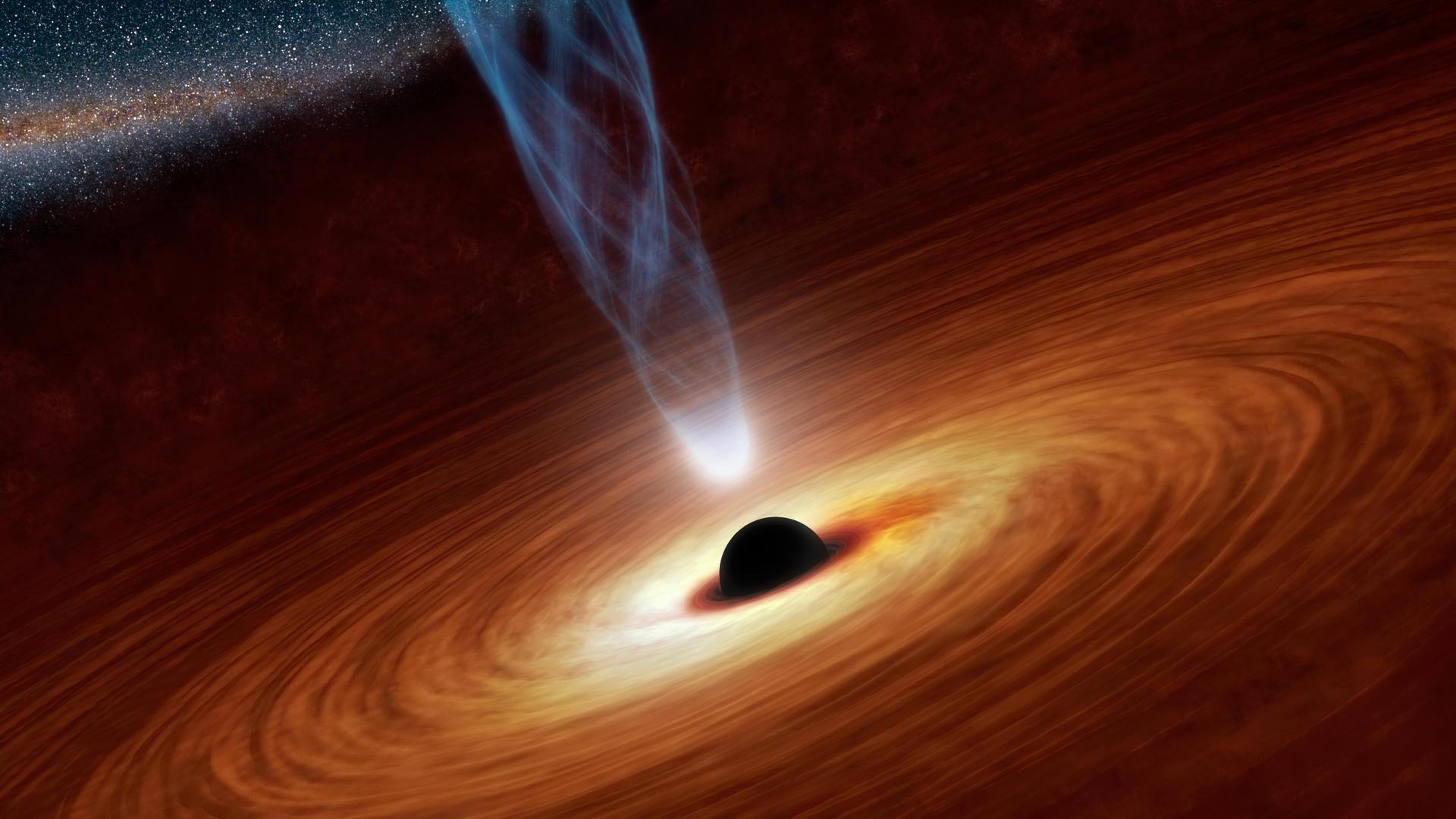 Sun is the center of the solar system which comprises 99% mass of the solar system. It means that if we put all the planets, stars, debris, asteroids, etc. together then they are only 1% in comparison to the rest of the solar system. Obviously, it becomes impossible to imagine the diversity of the sun and logically we think that there is nothing which is bigger than the sun. But again we are wrong here.  The universe is more diverse than our understanding or observation. There is countless mass which is far beyond our observation even and we are just bewildered on the existing findings. The existence of a black hole in our milky way galaxy is one of them. It is far bigger or diverse than our sun. In this article, we will have a detailed study on the black hole, its mass, or constituents.

What is exactly a black hole?

These are several points in our space. It is very dense to create a strong gravitational pull that even fast-moving light can’t cross it. Nothing can exist in its surroundings or cross it because of the strong opposing force. It exists stagnant at its place. Because no light passes through it so it is black at the center and not visible to the human eye. Scientists observe it with the help of space telescopes such as Hubble or James Webb’s telescope.

Compact masses in a black hole:

A black hole is basically a compact mass of the stars, debris that is squeezed at the center and develops a strong gravitational pull.  A dying star ultimately develops into a black hole. It is evident from a space observation in which scientists observed that the stars which are near to the black hole act differently than that of the other stars. Scientists believe that the very first and smallest black hole was formed at the beginning of the universe. It happens when a star falls on its own center and collapse. It acts like a supernova that blasts part of the stars in space. In one of his early speculation, Stephen Hawking predicted that a black hole can never form if the concentration of the mass is below about 10−8 kg (roughly the Planck mass). There should be enough concentration or energy which is more than the speed of light.

The gravitational pull of the black hole:

It is not possible to calculate the gravitational pull in numerical. But one can estimate from the fact that the speed of light is 299 792 458 m / s but still, it is unable to cross the hole. It means that a strong opposing force is opposing it. As the result, the incoming light from the surrounding constricts in its surroundings and it spears dark black in color in the center.

How big is the black hole?

Black holes can be small or big. They can be as small as an atom which is not visible to the naked eye. But the bewildering thing is that the atomic size black hole has a compact mass equal to the size of a mountain in it. Now you can easily estimate that how all the masses squeeze to form a black hole. A rough estimation shows that its diameter is 78 billion miles. Also, it is 21 billion times more than the mass of the sun. The mass of the amount of the objects making this hole is called “Stuff”.

Another black hole is the “stellar” which is far bigger than the Stuff. It has twenty times more mass than the mass of the sun. There are several stellar masses in our Milky Way galaxy.

The largest black hole in the entire universe which is discovered so far is known as “Supermassive”. If we put one million stars (sun) together then the mass of a supermassive black hole will be more than them. It is evident from the fact that every large galaxy has a supermassive galaxy at its center. This central black hole is known as Sagittarius A. Nearly its mass is equal to the mass of four million suns. And it can fit in a large ball that can hold a few million planets on earth.

Layers of a black hole:

The region inside the black hole where all masses lie is known as a singularity. Masses concentrate at this single point building strong gravitational pull.

How is it visible to scientists despite being black?

Scientists can’t observe black holes directly. But they can examine the gravity or behavior of the stars or gasses which are surrounding it. They observe how stars are flying around or orbiting around it. When a star or black hole comes together high energy light is produced that can’t be visible by the naked eye. They use a space telescope for capturing the image.

Is it destructive for the solar system?

As we have discussed that it is the unit of compact masses of space so a very common question comes to mind, it has a strong gravitational pull then it can eat the space mass. It can also destroy planet earth or even our sun because its mass is far more than our sun. But the fact is that it is it does not orbit around space like others. So it can’t eat stars, moons, and planets.

Earth can’t fall in it because no black hole is close enough to the planet earth. It is far away from the solar system where it can’t impact. Even if a black hole that is equal in mass to the sun is placed in the center then still earth can’t fall in it because of the strong gravitational pull. Rather earth will orbit around it as it orbits around the sun. Also, the sun can never turn into a black hole because of the small, energy, or gravitational pull.

The Event Horizon Telescope image of the black hole:

We captured it in 2019 which is obviously one of the extraordinary efforts made by scientists. It required two years of research even after scientists got the telescopic image. It is because it generated an astounding amount of data which is very diverse to transfer by the internet. With time, scientists think of generating other images of the black hole to guess how they look like depending upon the image they obtained. The next target is to obtain the telescopic image of the Sagittarius A which is the biggest black hole ever. A study in 2019 showed that a cool gas halo surrounds the Sagittarius A. It gives unexpected insights into the environment and how it looks like.

There are two theories explaining that how binary black holes are formed. One of the models says that two stars neighbor together and have the same spin. These stars die and collapse forming binary black holes together. The gravitational pull of the stars is similar to each other.

The other model says that two stars inside a stellar cluster sink to the center of the cluster. It makes to stars pair up and collapse. As the result, binary black holes form but the spin of both of them is different from each other. The observation of companion black holes with different spin orientations by LGIO’s provides strong evidence of the formation of this theory.

Some weird facts about black holes:

The sun being the center of the solar system is large in mass. But scientists have found a black hole. It is millions of times more in mass than the sun. Basically, it is the concentration of stars, planets, debris, gases at the center. It generates a strong gravitational pull which does not allow anything to pass through it. Even if a star comes near it then it is eaten by the black hole and never comes out.

As it is black in color scientists are unable to observe it directly with the naked eye. But they can observe the behavior of stars surrounding it. Also when a star or black hole comes near a high energy light is generated which is then captured with the help of space telescopes. It is not destructive for our solar system because it resides far away from our solar system. Also, the strong gravitational pull keeps it apart. If a human falls into the black hole the walls will appear like fire due to quantum effects and it will burn us even before reaching the singularity.

James Webb: Hubble telescope successor’s face ‘two weeks of terror’
Omicron: The New Variant, and here’s what we know about it
To Top