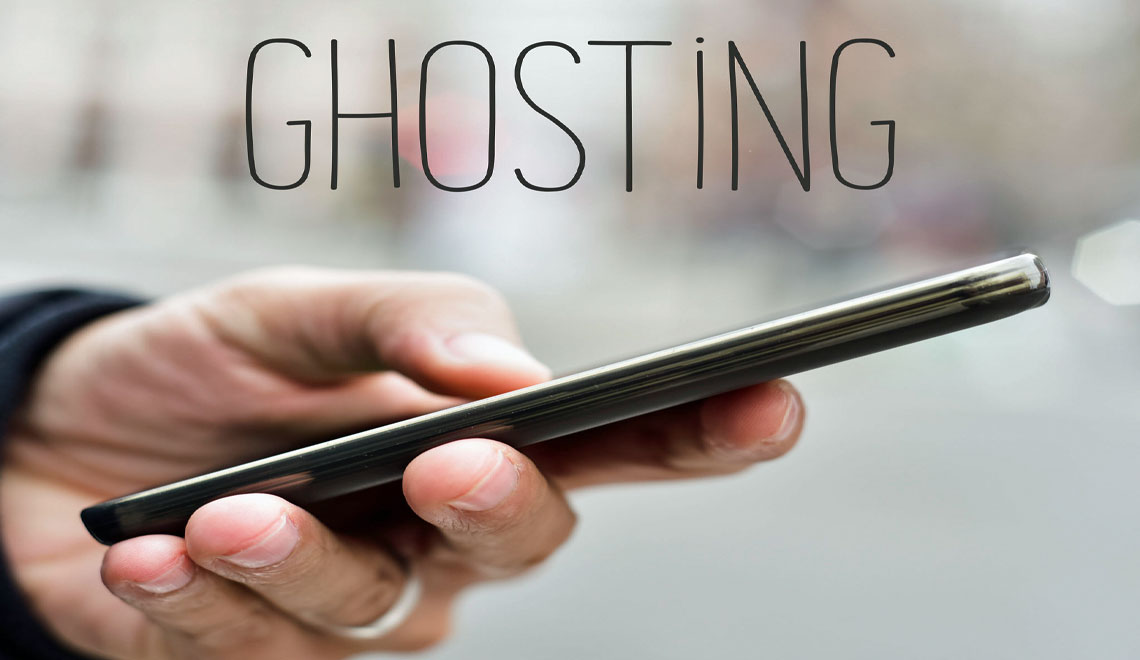 Ghosting is an evil act that people uses in ending a relationship. It is more or less leaving that other person in the dark without giving them any reason for your actions. Ghosting is a bad behavior, a sign of someone having character disorder. Ghosting is similar to gears that people suffering with the narcissistic personality disorder uses to plague healthy people. You can compare ghosting with discarding, but the difference is that you torment people severally before discarding them, whereas, ghosting is a sudden disappearance without any signal.

Ghosting involves sudden disappearance of a partner without any reason in a romantic relationship. Please, let not confuse “Ghosting” with “No Contact”.

The psychology behind ghosting is that it is evil, people doing that might be sick and they need help. In my life, people that I have seen ghosting other people are usually having low-esteem, afraid of expressing their feelings, cowards and just feel the need to disappear. If someone suddenly cut off all communication, contacts with you for no reason, you are being ghosted. Move on with your own life and wish them well in life.

You can also compare ghosting with silent treatment, while a silent treatment is temporarily a manipulation tactics, ghosting is permanent. But, there is, in fact, a situation where ghosting is not “evil”. Because you don’t owe them an explanation and that’s when you are getting away from a toxic, abusive person, a psychopath. In such cases It’s self preservation.

It is very rare that you ghost a narcissist. It is usually the other way round, the narcissists ghost people. You can only practice the ‘’Grey Rock Method (uninteresting and unresponsive like a rock)’’ and thereafter go’ No Contact’’.

Best way of walking away:

If there is a genuine reason towards yourself of walking away, then so be it, but saying “I don’t owe him/her an explanation due to his abusive behavior” is just showing the same level of abusive behavior. In that case, the best way is to say a few lines:

With such a text, you can just walk away proud of yourself because you spoke it out. Well in the case of narcissistic violence or other shits, you should definitely go cold turkey, ghost, and maybe call the cops or a friend (they will be the closure), but if it was just mild toxicity and manipulation, people deserve to hear the truth.

Why do people ghost?

I agree that ghosting is painful – The disappearing for no reason at all, that hurts. Maybe you were done with the relationship, maybe you feel that if you told the other person, they’d be mad. I can say that what hurts more than any of that is the disappearing without any explanation – people have feelings. Yes, it hurts when someone breaks up with you – what hurts so much more is when they just “leave” and say nothing and don’t reach out to explain at all. It’s like you don’t matter and meant nothing. It’s very confusing and can impact your own self-esteem.

At least in my experience, that someone ghosting you could be narcissistic behavior meant to hurt someone, it could be a person who lacks social skills and doesn’t understand the impact of their actions, or even someone with BPD who ghosts because they are scared they will mess up and ruin the relationship so they just leave before that can happen. They have low self-esteem or is suffering in some way – still, it’s not ok behavior At all.

Responses of people who ghosted:

Here are some responses of people who ghosted others:

How does it feel to be ghosted?

For many people, ghosting can result in feelings of being disposable, disrespected, insulted and can leave psychological scars. Specially, for the people with low self-esteem is likely to experience the rejection as more painful and it may take you longer to get over it as people with lower-self-esteem have less natural opioid (pain-killer) released into the brain after a rejection when compared with those whose self-esteem is higher.

Responses of people who are being ghosted:

I’ve experienced both ghosting and being ghosted.

I had a long relationship where we were at a point of being fully committed to each other. But from then, things turned sour when my partner kept pin-pointing at my mistakes. I kept being sorry, and changed my flaws. Then more of my flaws were used against me. It repeated until I stopped giving chances. I told myself, it had to be cut abruptly because I know we’ll be in the same loop of me being sorry, and the other person attacking me on another thing. So I ghosted, because I thought that was the only way. I didn’t feel good up until now. I don’t know for others, but for me the guilt is permanent.

Then a few years later, I got into another relationship. With a person I knew who’d ghost me sometime in the relationship, yet I went with it anyway. I knew what was coming my way. And yes, it happened, even when everything was going alright. It hurt, and still does up to this day. So bad that I kept saying I deserved to feel what I made someone else felt (and I did deserve it). It’s something I wish I never let anyone feel no matter how much wrong they’ve done.

So what I’ve learned is, tell the bitter truth. It might be really hard now, but it makes everything else easier down the road. It’ll save the both of you so much emotional stress, because ghosting affects both parties.

Here’s a story I found about how ghosting hurts…

As a suggestion, there are other methods to have a conversation with a person, you do not need to rely so much on social media. The way I can see it from a logical point of view (removed from all emotion) – that there are two parties that have a certain amount of trust and respect involved with each other. If someone does not feel they are getting what they need, regardless of the other party morals, habits, and beliefs etc this can alter how much the other party wants to invest in this relationship.

If the line of trust is not in line with their principles and beliefs or if the other party has offended them greatly/repeatedly, the other party has no other option than to cut off this toxic relationship, as safety is paramount to a person wellbeing.

I think the best way to deal with ghoster is to take their ghosting as a form of communication in itself. The message they are conveying is that they are done with you and are moving on so the best thing to do is move on too. What you can’t do is take them back if they decide to come back after a, while. Chances are they will raise your hopes then ghost you again.

Either way, it’s a sign one of the two people needs to do some work with how they approach relationships. No one ever owes another anything, so setting expectation is a big thing. It doesn’t always feel “fair” but it’s life and that’s sometimes just how it goes.

All about March
Why Green Eyes are Unique?
To Top