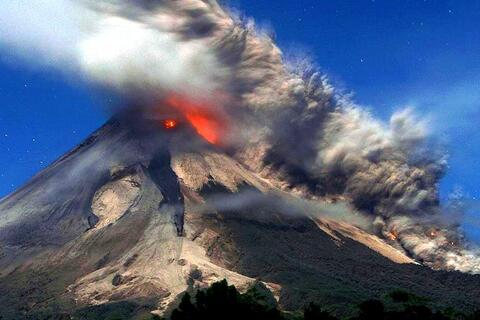 In February 1942, a Mexican farmer Dionisio Pulido heard a thundering voice and he thought that it was coming from his cornfield. The innovative thing was that the thundering sound was not coming from the sky rather it was coming from the field. There was a large smoking crack in the field emitting gas and smoke. He got frightened that what exactly it was. And then later it was discovered that it has happened as the result of a process inside the earth’s surface known as volcanic Paricutin.

Then over the next nine years, it was regarded as lava and ash which can cover almost 200km on the earth’s surface. But the question is that from where did this volcano come from? What caused this sudden volcanic eruption? In this article, we are going to explore the reason for the volcanic eruption and the extent to which it can cause impacts on the earth’s surface to harm living creation.

The story of every volcano starts with magma. It is a molten rock that is present in the area where ocean water is able to slip into the earth’s mantle. As the result, it can lower the layer melting point. In this way, typical magma remains under the surface of the earth. There is a delicate balance of the three geological factors such as lithostatic pressure, magmatic pressure, and rock strength. Usually, the rock is able enough to keep magma below the earth’s surface. But when this balance is out then there is a sudden eruption out of the earth’s surface known as a volcanic eruption.

The ocean water is able to slip to the lithospheric layer of the earth for keeping magma inside it. Practically, there is a resisting force that is acting to keep it out. This pressure exhibit by the lithosphere of the earth is known as lithostatic pressure.

As a reaction to the lithostatic pressure, there is an opposing force from magma in order to overcome it. This pressure exerted by magma is known as magmatic pressure.

The battle between two forces lithostatic and magmatic force triggers the third factor known as rock strength of the earth’s crust. The large rock is able enough to overcome the magma and keep it in place. When this equilibrium is thrown off, the consequences can be very explosive. One of the most common consequences is the increase in the magmatic pressure for a volcanic eruption.

Just like a rock-solid, magma is a mixture of minerals. There are small amounts of gases such as carbon dioxide, sulfur, and water vapors. Also, there is a high temperature and pressure inside the earth’s crust that keeps magma in its molten or fluid form.

There is a large number of dissolved gases in the magma that forms the basis for all volcanic activities. The most abundant volcanic gas in magma is water vapor. It is harmless but there are many other gases such as sulfur dioxide, carbon dioxide, hydrogen halide, and hydrogen sulfides.

The water and sulfur which is present in the magma are unable to dissolve. Both of these form high-pressure gas bubbles in magma. Due to the disturbance in the balance, when these bubbles reach the surface of the earth, these bubbles burst with a sharp burst. When a large number of bubbles will erupt simultaneously, the energy of the magma will send the blooms of the ash into the stratosphere.  Before the eruption, these bubbles are like air bubbles present in the soda bottle. These bubbles resist the magma to remain in its place. It lowers the magma’s density and increases the buoyant force pushing upward to the crust. Many Geologists believe that this buoyant force is responsible for the eruption in the cornfield of the Mexican.

There are mainly two reasons for the buoyant bubbles. Sometimes the new magma inside the deeper earth surface increases the gases into the mixture. But sometimes the bubbles can also be formed when magma begins to cool. In the molten state magma is the mixture of dissolved gases and melted minerals. As the molten rocks hardened or cool down, some of the minerals solidified and forms crystals. The whole process incorporates many of the dissolved gases that results in the higher concentration of the compounds forming explosive bubbles.

Process of rock unloading and eruption:

It is not compulsory that volcanic eruption is due to the increase in magmatic pressure. Some of the eruptions are due to the lightweight rocks that remain unable to keep magma inside. The weight of the rock becomes dangerously low due to the extensive land sliding.

This process is unknown as rock unloading. It may also be due to the erosion of the earth’s surface and the melting of glaciers. The melting of the glaciers due to climate change is responsible for volcanic activities. That part of the rock suffers from the drop in the lithostatic pressure and then a sudden volcanic eruption occurs here.

The acidic gases or heat that are emitting from magma causes cracks in the rocks. The hard stones turn into soft clay. This soft clay is now part of the others dust or rocks on the top layer and no longer can hold the magma inside the earth.

The hard rocks can also be weakened by tectonic activities. Due to earthquakes, there are certain faults or cracks on the surface of the earth. These cracks act as a site for the eruption of the magma from the inside of the earth. The earth’s surface is stretched because it displaces away from the continents.

Effects of the volcanic eruptions:

The effects of volcanic eruptions can be mild or large depending upon their intensity. It has a large impact on the locality. It produces ashes, bombs, lava, pyroclastic flows, and lahars. The ashes produced from lava can cause change global change in the climate. There are some the threats such as drinking water contamination, floods, mudslides, power outages, and wildfire. The volcanic eruption impacts can be positive or negative.

Volcanic eruption is the volcanic activity that happens inside the earth. The inner depth of the earth comprises molten magma which remains inside due to the delicate balance of the lithostatic pressure, magmatic pressure, and rock strength. All of these forces are acting as a resistance for magma to come out. But when this delicate balance is disturbed due to land sliding, earthquake, unloading, glacier melting, etc. it favors the volcanic eruption. When magma comes out of the surface, it is called lava. Lava can be cool down on the surface of the earth. It causes various impacts on locality such as floods, global warming, mudslides, wildfire, water contamination, etc.

What are emotions and emotional responses?
Living in Bad Air – Say No to Air Pollution
To Top