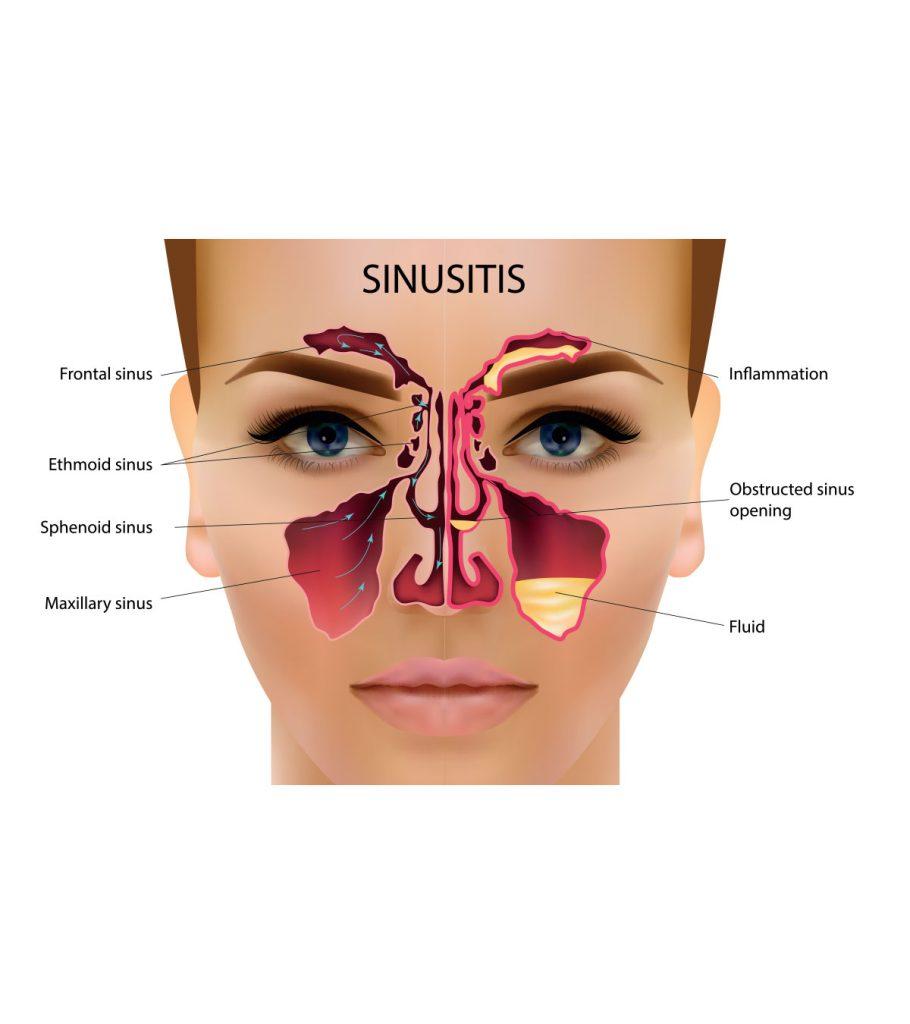 During the era of pandemics, it is quite frequent for most of us to get flue. Especially those who are not fully vaccinated as well as don’t own a strong immune system. It’s quite a discomfort that lasts over a period of time.

Also, there are many other associated symptoms that you face in parallel. Generally, it is known as a sinus. We will discuss the disease, cause, and its possible treatment so that we should be helping ourselves first hand.

Sinus is also known as sinusitis is the inflammation of the paranasal sinus. These are the air spaces around your nose. It can be acute that can last for four weeks or maybe sub-acute which lasts for one to three months. It may also be a chronic sinus whose duration is more than three months even.

When you breathe, air enters the nasal cavity. The nasal cavity is lined by the goblet cells that produce mucus after that. The mucus is sticky and salty.

Also, it has lysozyme enzymes that kill that bacteria or any other harmful particle which enters your nostrils. The additional protection is provided by the nasal hairs. These hairs lining is by mucus. It is able to trap large particles or dust as well as bacteria. That’s why you have tiny clumps of boogers in your nose.

Our nasal cavity consists of four types of the paranasal sinus which we name according to where they lie. One is the maxillary sinus which is the largest paranasal sinus. It is present right below your eyes. The ethmoidal or sphenoidal sinus lies behind your eye. The frontal sinus lies right above the eye and in front of the forehead.

All of these air spaces are acting as echo chambers in the nasal passage. These are filled with the air and produce a specific sound. This is why when you are suffering from influenza, the breathing sounds differently because air chambers are filled with mucus to cause distortion.

Other functions of the paranasal sinus:

Air circulates in these air chambers. It gets warm and moist in the maxillary sinus. However, the walls of the frontal sinus are covered with the mucosal epithelium. These are alike goblet cell here which produces mucus. In the same way, it traps foreign particles. There are also some columnar cells that have tinny hair-like cilia. It helps to move the mucus into the nasal passages so that it can be taken out of the passage to avoid trapping.

The most common sinus is the acute sinus. It can be caused by a viral or bacterial infection.

Some of the bacteria are also involved in causing flue such as Streptococcus pneumoniae, Haemophilus Influenzae, Moraxella catarrhalis, etc. Sometimes the bacterial infection is caused after the viral infection. It may also be caused by the normal blockage in the sinus.

Sinus can be acute, sub-acute, or chronic sinusitis depending upon the secretion of mucus.

As a result of the sinus, there is inflammation in the lining of the paranasal sinus. This infection caused goblet cells to secrete over mucus. At the same time, your immune system is fighting to overcome the foreign attack which will produce puss in the mucus. Puss is a mixture of pathogens, immune cells, and dead tissues.

If your immune system is unable to fight with the acute sinus then it will prevail for a longer period of time to convert into the sub-acute sinus. It is a chronic infection that is caused by several infections. Many environmental factors such as dust or pollen allergy may also cause sinus. However, bacteria such as Aspergillus causes infection especially in people who do not own a strong immune system.

It is also called chronic hyperplastic sinusitis. In this sinus the connective tissue in your nasal passage undergoes hyperplasia. Hyperplasia is a condition in which they proliferate much faster than the usual proliferation. There is a non-cancerous growth of cells or tissues into your nasal polyp.

Symptoms of the sinus:

The symptoms of the sinus vary according to the severity of the infection. The most commonly associated symptoms are mucus built up into your paranasal sinus.

It causes facial pain, pressure, or headache. If the infection is mainly by the bacteria then it will prevail with the fever. There is also a change in your voice because of the trapping of mucus in echo chambers. There is a change in sense of smell and taste. However, cough is the worst form of infection.

Diagnosis of the sinus:

The diagnosis of the sinus is based on the severity of the infection and related symptoms. If the infection is acute then the virus will die after completing its life cycle. But if it prevailed in the form of subacute or chronic sinus then maybe the doctor will direct you for the CT scan test. You can also go with the Rhinoscopy. In rhinoscopy, some tube-like structures with connected cameras are inserted into the nasal passages. It will show the inside of the nasal passage to point out the blockage.

Treatment of the sinus:

The most common treatment for bacterial infection is the use of antibiotics. These are the decongestants that reduce the swelling or promote drainage for a smooth flow. As the result, a cough will come out to let you breathe peacefully. If you are allergic then steroids or allergy medications can be helpful. However, for chronic or recurrent sinusitis, sinus surgery is helpful for treating all types of the infection. It will open up the walls of the sinus to allow the drainage of the mucus.

Sinus or sinusitis is a bacterial or viral infection that causes paranasal sinus inflammation. These are the four pairs of air chambers in your nasal passage that produces mucus. The inflammation in the lining will cause goblet cells to secrete more mucus that blocks the passage in echo chambers. The mucus is blocked here to stop the drainage which is causing discomfort for you.

There are several common or associated symptoms of the sinus such as difficulty in breathing, change in smell or taste, cough, fever, etc. depending upon the severity of the infection. It has to be diagnosed at the first stage so that we can prevent its proliferation.

In severe cases, you can go with a CT scan or rhinoscopy. However, the use of antibacterial medications will also help to rectify the mucus drainage. Sinus surgery is helpful when the infection is acute and the use of medication is not preventing infection.

Mental Health: Topic That Needs Lots Of Attention
What are Learning Disorders?
To Top