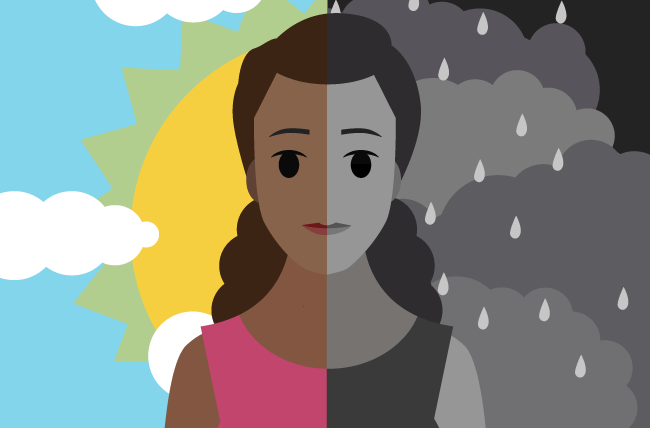 Mood swings are normal. We are not supposed to remain alike all the time. Sometimes we feel energetic and want to conquer the world with our ambitions. But sometimes it’s all gone. It is not a matter to be worried because this is how we are expected to react in different situations, being human beings. These situations may be losing your job, family problems, etc.  But the question is that do all mood swings are normal?

Do you know a person who is very close to you? Sometimes his talk to you makes you feel like heaven. All you are getting here is motivation and positive vibes. But on the very next day, he is making you feel down from his thoughts. You may question that he was not alike before but the problem is not that simple. He is suffering from bipolar disorder which resists him to be on track all the time. It is not compulsory that these mood swings are associated with the disorder but if you have some awareness to judge the symptoms, maybe you can be a helping hand for the victim in suffering. This article is going to illustrate what exactly this disorder is and what are the possible symptoms that can be associated with it.

Bipolar disorder is a serious mental disorder that causes a drastic change in mood, energy, and emotions. It is also called manic depression. You will go from extreme low to extreme high mood shifts. It can persist for several days or weeks.

The mood swings in bipolar disorder are categorized as,

In this phase, the patient remains energetic and happy to do tasks is called Manic or hypomanic episode. It is a level of severity in which people feel energetic, overly happy, euphoric, or high level of self-esteem.

It seems a very positive way but it can have severe consequences. For example, people feel energetic by just focusing on the positive side of the aspect. They will not think about bad consequences so can invest the whole of their money in it. The person may have a pressurized speech in which he talks at a rapid-fire pace. There may be some of the racing thoughts in his mind that are associated with several other symptoms such as increased blood pressure, lack of sleep due to racing thoughts.

A person may also experience delusions of grandeur in which he considers himself as a supernatural force to direct the world accordingly. The poor decision-making symptoms will not let the person think about the poor consequences. There is no regret to what has happened.

It is a major low phase of the patient. The more he was enthusiastic in previous days, the more he is down and depressive at this time.

The consequences are similar as you face during depression such as lack of decision-making power, focusing on the worst or negative side of the aspect, etc.

There are various types of the disorder depending upon the various episodes. We will illustrate it with the help of a graph.

If you divide the graph into upper and lower two parts. The upper side is representing the manic phase and the lower is the depressive phase. Also, the middle line is the time representation.

Now if the person is suffering from unipolar depression, he might have some of the normal highs but there are some of the crushing lows, depressive phases. It may last over a long period of time.

The patient will have some of the major depressive phases that can last up to two weeks. After that, there are major manic episodes that last for one week. It can be as severe that the person may have to be hospitalized to normalize himself. Then there are some lows in the same episode which can persist up to three to six months.

In this type, the person will experience similar lows as in bipolar-2. But there are additional highs known as hypomania. These are less severe episodes than manic. It is supposed to last for 4 days and generally, it can last for a longer time.

It is also called a cyclothymic disorder. In this type, the person has equal highs or lows which also accompany hypomania. It occurs in a cyclic manner and the cycle can last for one year.

Cause of bipolar disorder:

Like many other mental disorders, the exact cause of bipolar is unknown. There is no single gene that has been identified to cause bipolar disorder. However, there are some genetic or environmental factors that can cause it. For example, if a person has a family history of bipolar disorder, he is ten times more prone to develop it. Some of the drugs and the medication may also trigger it such as selective serotonin reuptake inhibitors (SSRIs).

Prone to other disorders:

A bipolar patient is likely to develop many other disorders such as ADHD, substance abuse disorder, anxiety, or personality disorder.

It is true that we do not know the cause of the disorder but still some treatment or identifying the patient is needed. If you will leave it just because there is no cure to it, a person may further fall into trouble, can harm him, or can commit suicide.

One of the oldest and most effective cures is the use of lithium salt. It works as a mood stabilizer. It is best for treating manic rather than depressive episodes. However, patients also use some of the anti-depressive medications which cause major side effects. For example, these medications can even trigger your manic episodes. Other medical treatments include the use of antipsychotics, anticonvulsants, or benzodiazepines. The use of all these treatments can have major side effects that may be more damaging for the person in the end.

Psychological interventions can also be used for this purpose. For example, you can take assistance from talk therapy, cognitive behavior therapy, etc. which is very effective for your manic episodes.

There are still very effective tools for the treatment such as when the manic episode is ended you can help the person in his depressive phase. It will in return prevent the manic episode to continue the cycle.

Bipolar disorder is a serious mental disorder that causes serious mood swings. These are serious high moods called manic episode which accompanies the tragic depressive mood. There are several types of bipolar disorder that have several related symptoms. But in these types, the symptoms which remain constant is being low. We had a graphical representation to explain various those and consequences.

We can’t point out the exact cause of the disorder but there are some factors that trigger it such as genetic or environmental factors. Also for treatment is it important to point out the person because if not treated, the patient may have a tragic end in the form of suicide. The use of lithium salt is one of the oldest and most effective methods to treat it. The use of medications can have serious outcomes. However, therapy can work best for the patient to avoid further harm.

Pollen preparation by Acetolysis:
Everything You Need To Know About Immunology and Immune System
To Top