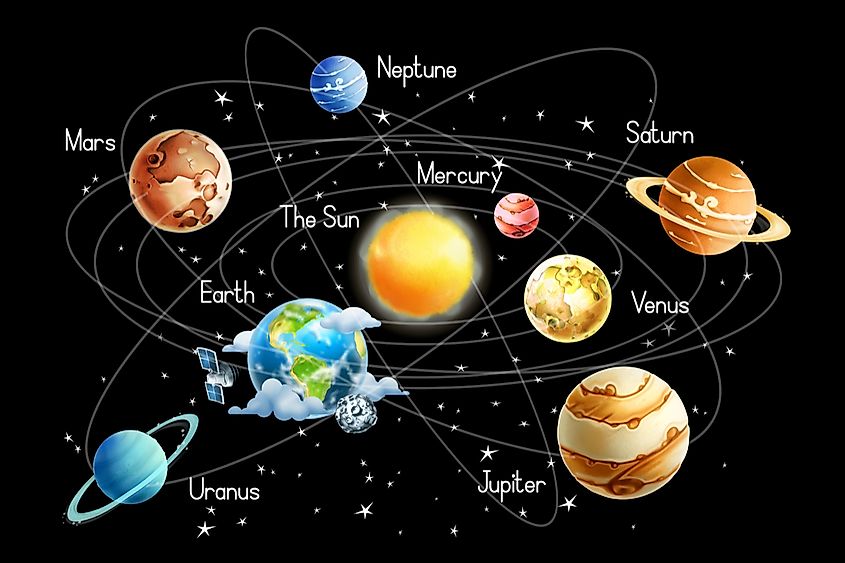 We have learned about the solar system from a diagram. In this diagram, some ball-like structures are used symbolically. A large burning ball lies inside and the remaining large or small-sized balls orbits around it. The central burning ball of gases is our sun and the remaining balls are planets. Out of all these planets, one of them is our own planet Earth where we are living.

We have learned so much about Sun because the rest of the solar system is at the expense of the sun. The solar radiations reaching the earth are of great importance to tune several changes on Earth. Do you also aware of the planets? How many planets are there in our solar system and what are the terms and conditions for calling it so? In this article, we are going to discuss a detailed analysis of the planets of our solar system.

What exactly a planet seems a simple question. We all are aware that earth, Mars, Jupiter are planets. But the story does not stop here. Ceres and Pluto were once considered planets but today with enormous discoveries and unveiled any other facts about them.

There is a huge debate about it. In 2006 the most acceptable definition was accepted by the International Astronomical Union. According to this definition, a planet should hold the following three features,

This debate and discussion will remain to continue and we will continue to discover new facts about our cosmos.

There is nothing wrong to question our previous knowledge. This is how we go further near to the facts. Science is the process of hypothesizing, questioning, discovering, and replacing new ideas with the previous ones after learning. These ideas are developed through reasoning and by testing our observations. Scientists think critically and question everything in a process called peer review. Our understanding of the universe has been changed with time increasingly. At one time we used to consider that earth is stagnant and the sun revolves around it. And then with further analysis, we found that it is a very bogus idea. Earth was never stagnant rather its sun lies at the center. Now ideas can make us able to think differently. And these ideas can only be promoted via questioning.

The evolving definition of the planet:

Defining the term planet is very important because this definition reflects our ideas regarding the origin of life, evolution, and architecture of our solar system. Over the course of time, our definition of the planet has changed. Greek considered Earth’s Moon and Sun as planets. Also, Mercury, Mars, Venus, and Saturn were included in the same category. At that time Earth was not considered a planet but a central celestial body around which all other planets orbit.  In the third century BCE, a model was presented by the Aristarchus of Samos. In this model, the sun was placed at the center of the place of Earth. But unfortunately, this model was not accepted. Then the same idea was revived by Nicolaus Copernicus.

In the 17 century with the invention of the telescope, many hidden realities came up. Scientists say that the sun is at the center and all other planets including our own earth are revolving around it. They also found that the moon is not a planet rather it is a satellite. In 1781, Uranus was added to the list of planets and then in 1846, Neptune was added. In 1801, between Mars and Jupiter, Ceres was observed and then classified as a planet. But then some other objects of the same nature were identified in the same pathway so it was termed as an asteroid or minor planet.

In 1930, Pluto was discovered and termed the ninth planet. But it is smaller than Mercury and even smaller than the planetary moon. It is different from other terrestrial planets (Venus, Earth, Mars, Mercury) or ice giants (Neptune, Uranus) and gas giants (Saturn, Jupiter). Charon is the satellite of Pluto which is a replica of its size and shares the same orbit. Till 1980, it was considered a planet but then in 1990, things change with some of the new discoveries. There were many technical advancements regarding telescopes and it granted us deep insights into very distant objects also. Scientists have discovered some of the icy objects which are revolving in the Kuiper Belt. These objects are known as Kuiper objects or KBO. It is very interesting to think of Pluto as one of the biggest KBOs.

Planets are formed from the gases or dust which are present in the nebula. These gases collapse during the formation of stars. The gravity of the newly formed star increases the clouds that are present in the surrounding area spin and form a disk-like structure known as a protoplanetary disk. The area of the newly formed disk which is closer to the star contains dusk and the area which away contains ice and gas.

Some of the areas of the disk stick together like a giant space tumbleweed and a pre-planet are formed known as planetesimal. Due to an increase in the gravitational pull, it will become more spherical in shape. Hence it will gather more and more debris from the surrounding until the surrounding space becomes clear and the celestial body reaches its official status of the planet.

A massive debate regarding planet:

In 2005, scientists announced that they have discovered the 10th planet. It was similar in size to Pluto and was a KOB’s. At that time, scientists started questioning the planet and what exactly it is. To whom they can call a planet? They found that there are plenty of disagreements about it. A worldwide organization of astronomers, the International Astronomical Union (IAU), accepted the challenge of classifying the newly found KOB in space. As the result, a new category of the planet known as the dwarf planet was defined and established by the IAU. They named Pluto, Ceres, Eris, and two more recently discovered KOB’s named Makemake and Haumea as the dwarf planets as recognized by the IAU. There is an idea that maybe there are 100 dwarf planets in our solar system or even a hundred more in it which are just outside the Kuiper Belt.

The latest new definition of the planet:

As we have discussed above that our understanding of the universe is changing. In this regard, it is compulsory that our nomenclature should be clear enough to define our understanding of a particular thing. It is also applied to the designation of the planet. This word planet represents “wanderers” which seems like moving lights in the sky. Recently we have made another definition that is available to the scientific information. The IAU has defined the term planet and satellite. The following three categories need to be fulfilled for calling a celestial body a planet.

Debate and discoveries about planet continue:

Some astronomers still do not agree with the existing definition. They say that these terms and conditions are kept in order to limit the number of planets. For some other celestial bodies, there are other terms and conditions. Sometimes the location of the planet is very important especially when you understand the formation and evolution of the solar system. One of the ideas says that these are the natural objects in our space. The gravitational influence of the body is large enough that it can keep its spherical shape. But some say that this simple definition is not accurate because it does not take into account the degree of the roundness of the body.

There is another argument that where an object is located and from which material it is made up. The dynamics of the objects should not be concerned which means that whether or not the object scatters away in its neighborhood and then holds other bodies in its stable orbit. And then the debate about the planet still continues.

Our knowledge is expanding so having some of the deeper and complex understanding of the universe. Researchers have found hundreds of exoplanets or extra planets that are present outside of our solar system. It is believed that maybe there are billions of exoplanets in our Milky Way Galaxy alone. And still, we debate that whether the existing definition of the planet will fit on these celestial bodies or not.

Planets are the celestial bodies in space that are formed as the result of the explosion of gases and dust in the nebula. Before the formation of the planet, there are some pre-planetary structures are formed. After the planet has been formed it will start orbiting the center of the solar system, the sun. In fact for calling a celestial body a planet, it should orbit the sun, and the gravitational pull of the body should strong enough to keep its spherical shape and clear any other objects coming in its way. However, the debate is still on.

James Webb Space Telescope: The largest space telescope leaves the Earth.
What is a satellite?
To Top