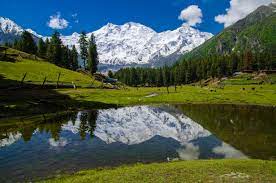 Fairy Meadows, the very name springs the thought of magical fairytale like land to our human minds, which by the way is definitely what it means. Fairy Meadows is the heart of glamorous North Pakistan. It is located at the base of Nanga Parbat Mountain, which is 8126 m high and is the 9th highest mountain in the world and second in Pakistan after K2.

Now, many people I’ve met don’t know about this place and have no knowledge of it even existing. Some might think or assume from its name ‘Fairy Meadows’ that it is an imaginative land, a place which don’t really exist in the physical world. Well, one might truly admire this romantic notion of Fairy Meadows, but that place actually exists. Some say that it was the German Climbers who named it Fairy Meadows, while some are of the view that it was Austrian Climbers who suggested that name. Whatever the case, people even the natives to the land began to call it Fairy Meadows.

The place is famous for its matchless lush green plateaus and is considered ‘Heaven on Earth’. Through Fairy Meadows, one can have a clear and mesmerizing view of the majestic Mountain Nanga Parbat, which is also called ‘The Killer Mountain’. These lush green meadows and forests lie at the base of Nanga Parbat at the western edge of the Himalayan range in Pakistan. Fairy Meadows is a very peaceful and comforting place to enjoy the mountain atmosphere and generosity of the local people. The name Fairy Meadows is part of the legend that Fairies have their heaven on this lush green plateau.

Why Nanga Parbat is a Killer Mountain?

Nanga Parbat is a Sanskrit word for “Naked Mountain” is so named because some of its slopes are so steep that they are deprived of vegetation and snow. According to the local old legend, Nanga Parbat is also called as Diamir, which means the ‘Home of Fairies’. It is still believed according to the local legends that the Queen of fairies lives there in a castle made of solid crystal-clear ice, which is protected by colossal snow serpents and frogs.  Every One in Five people who attempted to climb the Nanga Parbat never descend back. The earlier disasters in climbing this mountain are attributed to the displeasure of fairies.

Nanga Parbat is not a single peak but consists of 20km long series of several peaks and ridges that lead up to in an ice crest of 8125m. It’s South Face known as Rupal Face which is 5000m high, while the North or Raikot Face thrusting over 7000m from the summit to the Indus creates one of the world’s deepest chasms. Nanga is the ninth tallest mountain in the world, standing at 8,125 meters (26,657 feet), and is the second tallest mountain in Pakistan, after K2.  It is also the first mountain in the great Himalaya range, which extends up to 2,400 kilometers to the east, expanding through six nations and ending in Tibet, China.

What made a Trip to Fairy Meadows so interesting?

To reach Fairy Meadows is a bit tricky but again it wouldn’t be such a breathtaking sight if getting there was easy. I made a trip to Fairy Meadows in September 2021, which was an ideal time to go there. The group of us were dropped at the Fairy Meadows pickup point on Raikot Bridge. From there we were supposed to load ourselves into jeeps which would go to a certain point till Tatoo Village that would take roughly 2 hours.

The jeep ride till Tatoo Village was extremely bumpy that our heads were practically bumping on the jeep roof constantly for hours. Onwards from Tatoo, the route becomes too narrow for a jeep to travel but not very difficult for trekking. After two to three hours of trekking depending on your fitness level, you’ll reach Fairy Meadows. As it was my first time trekking on such a difficult route, it took us 4 hours to reach Fairy Meadows, give or take.

Having taken on such a hectic day of trekking, we were too tired to admire the beauty of anything. The next day our group went to Beyal Camp and some of them went even farther and made it to the Nanga Parbat Base Camp. The famous day hike from Fairy Meadows is for Bayal Camp & the Base Camp of Nanga Parbat. Friendly and experienced mountain guides, who were familiar with the terrain, accompanied us, and took us to different treks. Staff at cottages is usually experienced and help trekkers in planning their routes. Camping equipment & food can also be arranged for these treks.

The hike to Beyal Camp was an enchanting one. That was when I saw Nanga Parbat in all its glory. It’s true what they say that ‘seeing is believing’. The multiple vlogs and photos I’d seen of this trek and Nanga Parbat itself didn’t move me as much as seeing and witnessing it with my own two eyes. Such beauty, such magnificence, can never be truly captured nor can be contained within two human eyes. It is something to be felt, deeply. Seeing the world from up above the mountain, you become the bird’s eye. Having being so close to the nature itself, physically, you practically feel its presence.

One can never ever feel alone in such nature. It made me forget the whole world and I became one with the mountain, the nature itself. When the night fell, Nanga Parbat was bathed in the most pure moonlight I’ve ever seen. It was phenomenal. I can’t explain that feeling into words. The eternal white snow-covered Nanga Parbat was draped in the dimmest, most magical of the moonlight touch, with a dark sky behind. It was the most beautiful thing I’d ever seen. At that time my soul left my body and became one with the mountain. I found my truth. It was the most alive I’d ever felt in my entire life, in that erring silence in front of Nanga Parbat.

Emily Dickinson rightly said in one of her poems:

That was what I found exploring Fairy Meadows, the peace, the truth, and above of all, I found myself- the one with the nature. The truest form of peace comes from mountains, because no matter what they tell no lie and one can always find a home in them.

Omicron: The New Variant, and here’s what we know about it
James Webb Space Telescope: The largest space telescope leaves the Earth.
To Top