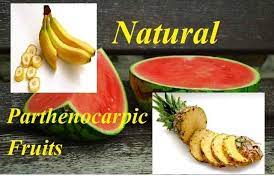 Process for the formation of seedless fruit:

Seedless fruits produce naturally as well as artificially by providing different treatments to the treatment group. The naturally occurring mutant gene to form seedless fruit is rare in nature. We can make multiple copies or clones of the seedless fruits, an unnatural way to form. Following is a detailed account on the process of the formation of seedless fruits.

Fruit is developed by the fertilization of the egg cells with the ovules. Egg cells are present in the ovular compartment of the flower, fertilized with the sperm nuclei of the pollens. The most common reason for the seedless fruit formation is the failure of the pollination and the presence of non-functional sperms and eggs. In some plants, there is the existence of the self-incompatibility of the gens that renders the fertilization via limiting the cross-pollination between different plant species.

It is a natural process that is use by citrus farmers to grow various varieties of seedless fruits of navel oranges and clementines. Because these plants are self-incompatible naturally so when you try to develop their clones their seeds remain unable to bear any productive results. Trees have great potential to produce fruits via parthenocarpy. They do not require seeds for propagation. In fact, if you try to propagate it via seeds then it will grant you the disadvantage of producing different plants than that of the parents. That’s why a nurseryman propagates trees via cuttings and drafting, a form of asexual reproduction.

Another process for the formation of seedless fruits in nature is the presence of a chromosomal imbalance in some plant varieties. For example, if a banana has a triploid set of chromosomes. In other words, it has three sets of chromosomes instead of two sets. Now one parent cell will contribute one set and the other will give two sets. The egg and sperms formed as the result remain unable to form successful seed formation in the plant. It is Parthenocarpic and produces successful fruit formation in the absence of seed. After the bloom of flower and fruit formation, its main stem dies. But there are some of the side branches with the main axis. These side branches can be used for the further propagation of seedless variety by cutting and drafting.

We use the same process for the formation of seedless watermelon. All we need is the triploid seed. For this purpose, we cross the normal diploid parent with the tetraploid partner which itself formed genetically for doubling the chromosome number. As the result, fertilization remains unable to produce successful seed formation. In the case of watermelon, this process needs to repeat with every plant variety so it seems somehow an expensive process and less commercial.

It is the most common process of the formation of seedless fruits. In some plants, fruit formation tale place without the process of fertilization. The process used for this purpose is known as parthenocarpy. It has various advantages over the seeded fruits such as having greater shelf life and more consumers demand. As the result, we have sterile fruit without the presence of seed in its flesh. Fruit is basically a ripened ovary and the maturity of fruit is done via as the result of fertilization of ovule and egg inside it. This process causes the secretion of a plant hormone called auxins which ultimately helps in fruit formation.

Now for the formation of the seedless fruits, we will render this fertilization and add auxins artificially into the ovary for its ripening. As the result, the full flesh fruit will form but it will be devoid of seeds inside it. It is a form of asexual reproduction, with no fusion of the male and female gamete. That’s why we call it a “virgin plant”. Auxins and Gibberellins are sprayed on the plants so that it remains independent of the maturation of the ovary.

There are some of the commonly occurring seedless fruit varieties such as watermelons, tomatoes, grapes, apples, plum, pears, and bananas. There are some of the common citrus varieties propagated by the citrus farmers such as oranges, lemons, and limes. However, if we use the term “seedless fruit” for such varieties then it contradicts the biological definition of the fruit. Fruit is the ripened ovary having seeds inside its flesh.

Advantages of the seedless fruits:

There are several advantages of seedless fruits. Following is a brief account of it.

One of the major advantages of seedless fruits production is that it fulfills the consumer’s demand. It is very unlikely to consume a fruit especially the one having very hard seeds, distributed throughout its flesh. For example, in the case of watermelon, the seeds are very hard, large in number, and distributed throughout the flesh that you can’t even separate. Most of the time, you have to consume it as it is and is unliked by many consumers. Here parthenocarpy plays an important role. You are able to have its seedless variety.

The same goes for the consumption of seedless oranges. Research reports that when we consume orange juice it can be a cause of inducing disease in 0.1% of consumers out of all. Now you are obviously unable to know that what you are likely to fall in the category of gaining disease or not. So you can easily have fresh juice of seedless oranges. In the same way seeds of apple and apricot have some amount of toxins such as cyanide. When you will intake those toxins in large quantity then it can even harm you.

It is also commercially very important. Today a big industry is working for the sake of the production of seedless varieties. It can also be through tissue culture. Ultimately, it is playing an important part to support the countries’ economy.

The shelf life of the fruit is of great importance. Increased shelf-life provides a longer time for the transfer of the fruit from the field to the shelf of the grocery stores. Fruits produce naturally mostly have a smaller shelf life. As the result, we lost most of the fruit stalk while transportation especially in the case of bananas. So artificially or naturally induced seedless fruits have more shelf life as compared to the fruit having seeds. It provides an opportunity for safe transformation as well as keeps its freshness alive.

There are some of the disadvantages of such varieties.

A study was published in the journal Plant Physiology in 2007, that the fruits produced by the parthenocarpy have misshapen, smaller in size, and duller in appearance. Some of the plant varieties such as cucumbers are soft in texture if we produce them through parthenocarpy.

Seedless fruit production is the asexual mean of reproduction. In asexual reproduction, the offspring thus formed is identical to the parent plant (exact replica). In nature, we have great biodiversity. Plant varieties formed by the sexual mean is different from the parent plant. It means that if a parent plant was suffering from a disease then it might be possible that the same disease would not transfer to the next generation.

It is not compulsory that the diseased gene is going to transfer to the next generation. But if you are propagating via asexual means such as cutting and drafting then obviously it will disturb the whole population. And if you are producing it on the commercial level then it will cause more damage. Sometimes, a pathogen resides on a plant variety but its symptoms are not visible apparently. Now when you will propagate it by consumption of expenses it will grant you damage.

In this article, we had a detailed account of the seedless fruits. The formation of seedless fruit is done naturally as well as artificially. Various genetic factors are involved in inducing parthenocarpy naturally. Artificially induced parthenocarpy requires treatment of treatment group with various plant hormones such as Auxins and Gibralleins. These hormones let the ovary ripe for the formation of fruit without the fusion of ovule and eggs inside it. This method is used especially for the plant varieties having hard seeds, distributed throughout the fruit flesh. It has many advantages such as it fulfills the consumer’s demand for those asking for the seedless varieties. It also plays an important part in boosting the country’s economy.

Some other advantages are, it increases the plant shelf life so that we may find more time to transfer it from fief to the shelves of the grocery store. On the other hand, there are some of the disadvantages also. The fruit produced as a result is dull in appearance and has a soft texture. Also, it is an asexual means of production which means that it will not increase the plant biodiversity and if a plant is suffering from the disease then after drafting it will transfer to the next generation.

How to Select Suitable Plugins for WordPress Blogs?
Media hegemony and its role to promote cultural elitism.
To Top