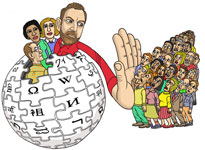 There is a strong link between media hegemony and cultural elitism. Media hegemony promotes cultural elitism supporting the traditional status quo of the society. It highlights only the selective side of the story which needs to be rectified by honest serving on the part of the authority.

Overview of the whole theme:

There is no second opinion in the fact that our cultural values and ideologies are promoted by the media especially when it is playing a dishonest role of “Media hegemony”. Media hegemony promotes cultural elitism. They feed the rest of the world, what they want to and hinder justice to prevail throughout the society for moving towards a golden end. It is a system of totalitarianism that not only controls the external factors of society but also has entered into our personal sphere of life for policing our thoughts.

What we have to do and what we are supposed to think is all assigned by the proletariats of the social sphere to the rest of the world. We are in a cage of some selective pre-defined framework and the one who tries to work against such norms is known as the rebel of the time. There is a dire need to change the existing system based on injustice and replace it with equality. At this place, authorities play their part honestly if we want a better world in the future. However, some strict initiatives can also be taken for discarding the current plight.

1- What is media hegemony?

(a) Antonio Gramsci concept of hegemony:

Antonio Gramsci is an Italian Marxist philosopher who is best for his theory of cultural hegemony. During his life, he had been imprisoned by the Italian Fascist in 1926. During his stay in prison, he writes several notebooks especially when he was sent to the medical center for his health illness. He died in 1937 and at that time he had written more than 30 notebooks and 3,000 pages of history. His concept of hegemony is related to cultural values, beliefs, thoughts, etc. He defines that the ideology of a particular society, controlled by those who are sitting in the upper seat. It is the cultural, moral, and ideological leadership of elites over the subaltern groups. He blamed existing injustice, on the part of several social groups to the authority holder which needs to cure of the right place.

(b) Crucial shaper of cultural and ideological values to promote a specific discourse in society:

Media in a society shapes its cultural and ideological values. What is normal in society is the exact translation of what was taught and shown to us on our TV screens etc. For example, we had shown on media that children are supposed to obey their parents and even if something wrong is going to happen on the part of a child because of the wrongdoing of elders, we have to accept it for maintaining the traditional respect between elder and young. And then in our practical life, we see those helpless children who destroy their life at the expense of the wrong decisions of the elder just because they can’t interrogate counter. Our media can play a contrary role in establishing justice. If it can create a mess, it can also clean it at the same pace.

Media purpose is the representation of the social sphere of a particular region. If it can serve you, it can also be a reason for destroying your generations. The world is changing at a pace and as a need of the hour, we have to change our thought for having an appropriate solution to our problems. If we will remain stick to the past ruling for addressing current issues, it will not work. And in this whole scenario, our media is playing a leading role. It highlights the conservative views as a complete code of life. Even if someone dares to change their ideology it is questioned by our elders first and then it is aired by our media providing the elite class a solid reasoning to their wrong thoughts. We should highlight modern ideologies as a solution to the existing problems via supporting the work of modern theologists.

What is cultural elitism?

(a) The belief of elite individual; constructive to society as a whole:

The ideology and morality of society lie in the hands of the elite class. They are having the hold of car starring and can turn the car where they want to. What we have to believe is at their expense. It is called totalitarianism in which leaders not only control our public/social sphere but also control our private sphere. For example, the ruling of the hijab in an Islamic state is decided by the leaders. It is not a personal choice for a woman to wear a hijab or not but she has to wear it while living in an Islamic state. Its living example is Saudi Arabia or it is also surrounding Pakistan with time. So your belief is not your belief but the belief of the one who is controlling you at the upper hand. There should be freedom of will for every individual if we want to construct a healthy environment. Be a reason for someone’s smile on his face rather than becoming a cause of suffocation.

(b) Power concentration in the hands of selective:

Prevailing inequality is one of the main targets of elitism. When some of the elites are standing at the upper stair for controlling the rest of the society, it will deprive the majority of the hold of decision-making. The same is happening in cultural elitism. No matter how better you understand your problem, still you will be told by a second party that what to do at that particular instance. It is a slave culture, dates back in history, meant for establishing a society in a particular way that is considered favorable by the authority. We can relate it to our domestic sphere in which power constricts in the hands of the husband and he is supposed to direct his wife in every aspect of life. His decision is considered as an ultimate authority. We need to distribute this authority so that everybody has equal right to take his/her own life decisions.

(a) Keen promoter to capitalism:

The existing capitalist system of society is the result of its reinforcement through media. Capitalism is the mean of the production of goods working on the principle “money begets money”. So the one who is enough wealthy to hold the position of the capitalist will exploit the proletariats. The fear of hunger will force the lower class to give cheap labor. All of the hard work is of the worker but the benefit goes in the pockets of capitalists. Indeed it seems an injustice on the part of workers if we think logically. It was not the excellence of someone to be born among wealthy belongings. In the same way, it was not someone’s fault for being deprived of money. So logically we can question this system. But our media which can play its main role is playing the role of its further promotion. There is the promotion of boss-employee culture so that those who are deprived of money get attracted towards cheap labor so that at last they will have something in their pockets.

(b) Highlights patriarchy as God’s favor:

Patriarchy is a curse which is been practiced for decades. There is an exploitation of gender at the expense of the ruler. For years, women are supposed to bear all those inequalities which ultimately grant her sufferings, cries, and hues. Obviously, it is happening for years but no one was there to question it because it was supported by every means and media was the main entity throughout the journey. We were shown on our TV screen or in a cultural scenario that women are meant to do compromise with these affiliations because “men is men” and he will do what he has to.

It is quite natural for a man of being angry, frustrated, strict, dominant, decision holder, and women to be emotional, fragile, less intelligent is supposed to be dependent on men for keeping a balanced pace in society. And it is such as common practice that nobody even considers it interrogative. For years our elders have suffered and in the end, obeyed men for getting rid. This traditional cage has become unbreakable with the special service of our media and obviously, it can be turned at an angle of 180 degrees for bringing a positive change. Media can represent women as jobholders, decision-makers, wise, independent, fighters, and all those terminologies that are associated with men.

Way forward to direct the existing culture towards productivity:

When we analyze the whole situation then it seems quite hopeless to work something good in it for betterment. But there is always a silver line among clouds. There is still hope for a better future. We can fight with those stereotypical ideologies altogether by using different means for this purpose. If media has promoted negativity for creating adversities, it can also create hope for erasing those suffering from the life of countless victims. We have seen this change even in today’s world in the form of activism. There are many organizations working for women’s rights, helping needy people, providing opportunities to those who can’t afford them. These struggles are being highlighted by the media so that we can provide a chance to the onlookers for moving in the right direction.

We had a detailed discussion that how cultural elitism is reinforced by the media hegemony. Journalistic can play their best part on the part of sufferers. They can highlight various social issues so that authorities can work on them. But this media hegemony does not let something good prevail. They highlight one side of the story which is selective and being consistent with the existing status quo. They are resistant to social change for achieving their own benefits. In this way, everybody goes with the flow because it is what is considered normal and ethically respectable.

The one who tries to question the existing culture is named a rebel and faces extreme resistance at the hands of elders and those who are sitting at the upper stair. This extreme resistance is highly suffocating for the reformist so the only solution seems for survival to accept it. In the end, this concept is supported by the support of elders and media. The only hope is to educate our future generation against stereotypical norms. Educate them for working towards a better. The media should play its honest role in cleaning the mess that is being created by it. Some checks and balances are needed on the part of the authority and in case some strict steps can be taken for discarding the root cause.

What are seedless fruits?
Towards Security Provisioning in Cloud based Multimedia Applications: Security Attributes, Challenges and State-of-the-art Methods
To Top