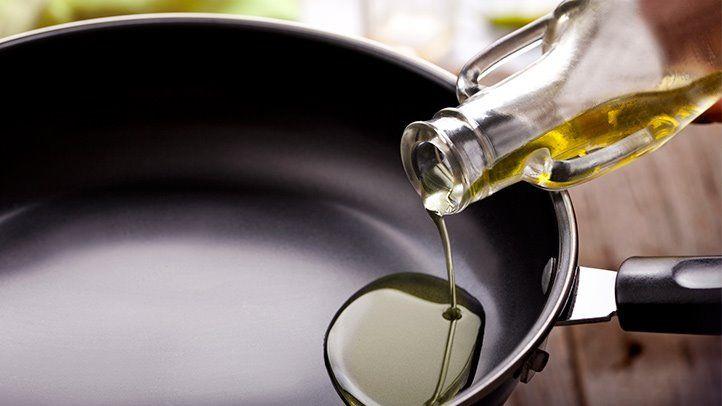 With so many options for cooking oils, how do you know which one is best to use? The answer isn’t as simple as you think, according to nutrition expert and author of Belly Fat Diet For Dummies, Erin Palinski-Wade, R.D., C.D.E.. “The type of oil you should use varies based on what you’re cooking and how you’re using the oil, ” she says. Some oils are best to use when chilled or at room temperature and can be unhealthy when heated. Other oils are more versatile and provide health benefits whether you’re sautéing, frying, or baking.

“Since different oils contain different smoke points, which is the temperature when the oil starts to smoke and breakdown,” explains Palinski-Wade. “You want to avoid heating an oil beyond it’s smoke point since you can create toxic fumes and free radicals that can be harmful body.” In general, the more refined an oil is, the higher the oil’s smoke point.

Here’s a breakdown of the four most common cooking oils, their health impacts, and how to best use them in the kitchen.

This form of olive oil comes from the first pressing of the olives and has the lowest smoke point of all olive oils. The smoke point for unrefined, cold pressed extra virgin olive oil is typically under 200°F. For this reason, this oil should only be used chilled or at room temperature.

This oil is derived by the use of chemicals to extract the oil from olives. Since this oil is refined, it contains a higher smoke point of about 450-468°F.

This term refers to a blend of refined and virgin olive oils and typically has a smoke point of 425-450°F.

Due to the moderate smoke points of refined and pure olive oil, it is best to use these oils in baking, oven cooking or stir frying and avoid using them for higher temperature cooking methods such as searing. “Olive oil is a terrific source of monounsaturated fats, which have been shown to increase the levels of healthy HDL cholesterol while keeping the levels on unhealthy LDL cholesterol down,” says Palinski-Wade. It also can also boost your intake of antioxidant polyphenols, which can help to protect the heart.

Canola oil is rich in healthy monounsaturated fats and has a higher smoke point, so it’s a smart alternative to virgin olive oils when cooking foods at medium-high heat, such as baking or stir frying. Although canola oil does not contain as many antioxidants as virgin olive oil, it offers the omega-3 fatty acid alpha-linolenic acid (ALA) which is great for heart health. Canola oil is also versatile since it contains a neutral flavor and a light texture. Some people have concerns about canola oil being genetically engineered. If you have concerns, it’s best to choose certified organic varieties of this oil, recommends Palinski-Wade.

Flaxseed oil contains one of the highest levels of omega-3 fatty acids, including ALA (like canola oil). “Flax is the richest source of ALA in our diet which is good news for those looking to improve heart health since it helps reduce blood pressure and cholesterol levels, helping to decrease your risk for heart disease,” says Palinski-Wade. Flaxseed oil has also been found to benefit those suffering from inflammatory bowel diseases such as Crohn’s disease and colitis, as well as Sjogren’s syndrome, an autoimmune disorder. Flaxseed oil, however, has a low smoke point so it’s best to use it in dressings, marinades, and dips and should not be heated.

Coconut oil has been under scrutiny because some groups believe it has many health benefits, while others recommend avoiding it due to the high saturated fat content. This oil contains a unique blend of lauric and myristic acids; lauric acids may negatively impact heart health, while myristic oils have heart health benefits. Some studies on coconut oil have found that it can actually raise the levels of healthy HDL cholesterol, but it was also proven to raise unhealthy LDL cholesterol levels as well. Coconut oil contains 12 grams of saturated fat per tablespoon, which is significantly higher than the saturated fat found in one tablespoon of butter (7.5 grams), however this oil may contain beneficial plant chemicals that have yet to be discovered, according to Palinski-Wade.

So what’s the bottom line with coconut oil? In terms of cooking, one of the benefits is its high smoke point so you can cook with it in a way that you can’t with olive oil. You can bake, fry, and sauté with it, and it can be a replacement for vegetable oil and butter. “Keep in mind that it may make a healthier alternative to other sources of saturated fat, such as butter or cream, but as with all saturated fats, no more than 10% of your total calories should come from these fats until further research indicates additional health benefits of coconut oil,” states Palinski-Wade.

A Healthy Makeover For Traditional Irish Recipes
What Are The Major Health Benefits Of Yogurt?
To Top