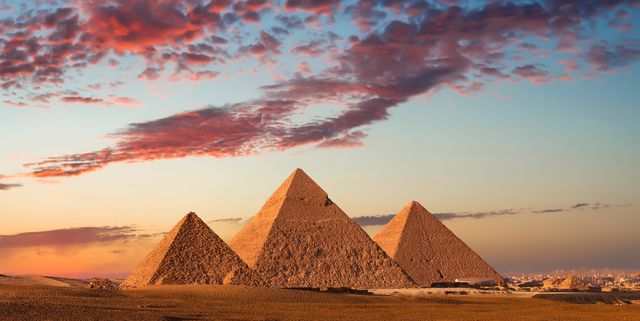 We have listened about the 7 wonders in the world; and within those wonders “The Great Pyramids of Egypt” came in the top. Today we all heard about these pyramids, but have very less knowledge about them. Why are they so suspense to us till today? What the mystery behind making these pyramids?

Humans are living on the planet Earth for more than a hundred thousand years now. But if we talk about about a proper civilization then; its proofing is found nearly about six thousand years BC from today. This period called ass the golden civilization period. Human beings from their very start made such revolutionary inventions; that even we got amazed by the wonders they made. Within these wonders ” The Great Pyramids of Egypt” are topmost of those seven ancient wonders in the world. So, how these mysterious Pyramids made? who made them? Let’s try to get those answers.

Egypt is considered one of the most important regions for history. This because it has the remains of ancient civilizations. In these remains of civilizations include the prism-shaped tall buildings known as pyramids in Egypt’s capital Cairo. The famous historians and archaeologists said that there are about 138 pyramids discovered in Egypt out of those 80 pyramids are still standing straight as before today. In these 80 pyramids, “The Great Pyramid of Khufu” the most famous.

Greeks Writings on the Pyramids:

If we see Greek writings then we understand that Greek writings also consists of these Pyramids which shows that Greeks also knew about these pyramids and their history. One of the famous Greek historian, Herodotus, wrote in his writings that about more than 100,000 workers combined to built these momentous pyramids. But the modern researchers, Egyptologists and Archeologists suggested that not more than 20,000-30,000 workers made these pyramids. By the 20th century, these Pyramids considered as one of the tallest buildings in the world made by man.

The Great Pyramid of Khufu:

The Pyramid of Khufu is considered to build about 2700 BC. Its height was about 480ft; which due to environmental changings and vanishing of the top cone now becomes 450ft. Its width on all four sides is 755ft and the total area occupied by this pyramid is about 13 Acre. About 2300,000 rock blocks used to make this pyramid. Each rock blocks even more heavier. The total weight of this pyramid is about 5.57 million ton structure which shows great engineering and construction skills and abilities of Egyptians. So, by this, it’s estimated that every day about 800-ton rocks placed on the place for building these pyramids. These rocks placed so fine way that even our credit card could swipe in between the spaces of two rock. This is the only pyramid which is opened to some extent and 3 chambers also located inside.

Both of these pyramids stand a little smaller than The Khufu but the Khufre is the one which still has its top cone which shows the shape of old construction style. It’s also stated that these pyramids were covered with a coating of limestone which in 1303 AD damaged in the earthquake.

In Arabic Abol Haul (means father of terror) was created for the worship o sun, God. Some historians stated that it’s aged 7000 BC old but some said 2500 BC. It is a status whose face is like a human but the body like an animal. It was made by moulding a very large limestone mountain.

Theories Related to Their Construction:

The construction of these pyramids are so fine that; they are still are big mystery for most of the scientists. Even many scientists have given theories related to the constructions of these Pyramids.

One software engineer from California stated that there were use of large kites and the rocks were connected to these kites than by air these rocks were shifted and transferred.

Some scientist suggested that may be Egyptians had this technique by which they zero the force of gravitation and then transferred these rocks. But this theory was exempted because of its impracticality.

One of the theory is that aliens made these pyramids even famous CEO of Tesla and SpaceX, “Elon Musk” stated in his tweet that these pyramids are made by Aliens. Egyptian Government also invited him to check and research by coming to Eqypt.

It was stated that these 3 pyramids were constructed my using exactly the reflection of 3 stars that appears at the top exactly above these pyramids. This theory as rejected by the Capetown university’s professor that the reasons presented in this theory are totally wrong and opposite to what was presented.

All of the theories above shows how much skills and techniques were there at that time. It is also shown that Egyptians were highly educated and they knew those laws of the universe which may be even having this much technological advancements that even today we cant figure out their method of working. Scientists can only give theories without practical law.

If we look at the sides of these pyramids then we will understand that there was used a high class of geometrical skills and knowledge because these pyramids are equal on all sides. It is stated that the Indian circle method was used by Egyptians to make these pyramids, because of not having machinery techniques as of today’s time.

This theory was presented by a French scientist Joseph Davidovits, he stated that these heavy rocks weren’t come from any where but they were produced by the mixture of limestone, soil, rocks and were produced in a wooden mold.

Reasons for Making These Pyramids:

There are also many theories which stated the reason behind why these pyramids made:

So, by all this discussion it is confirmed that there must be some reasons behind all these Pyramids but what were the reasons it’s yet a mystery till date. So what you people think of these pyramids?

Selfie Addiction: Its Causes and Triggers
Hello January!
To Top