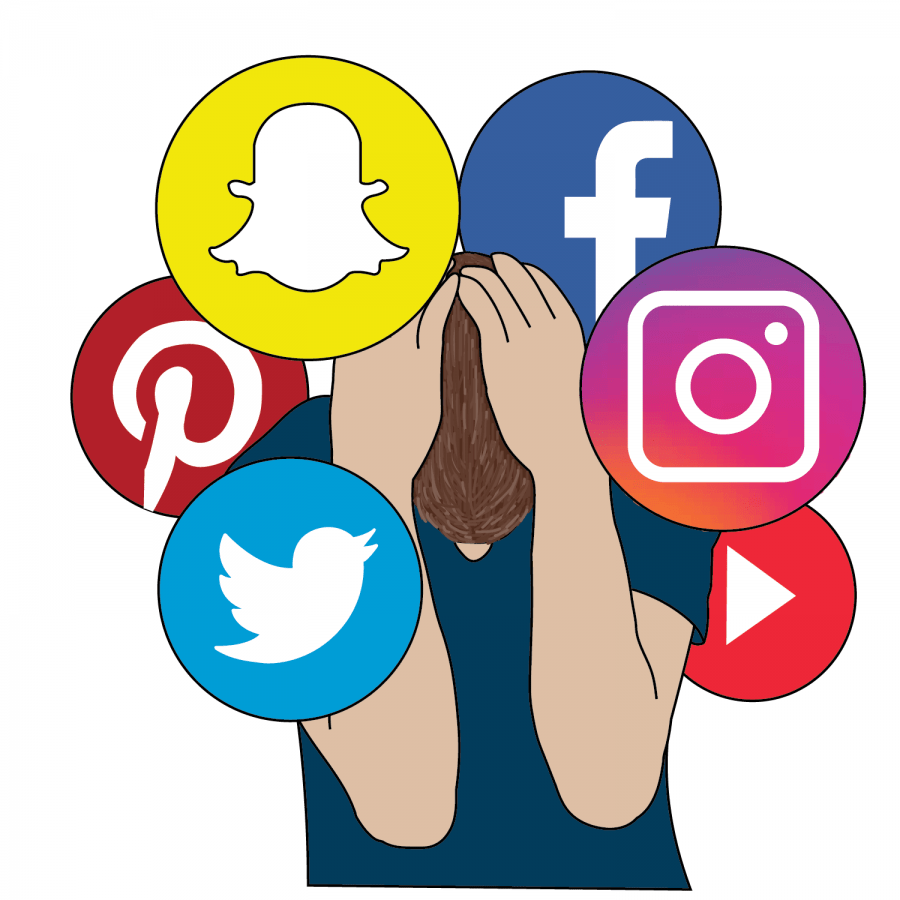 Social media has given a breakthrough to the world economy towards new insights or understandings by expanding and flourishing the communications among different countries. Moreover, by promoting trade worldwide. It relates to sharing of information, experience, and perspectives through community-oriented Social media involving various platforms on the internet which are being fundamentally used to get in touch with relatives and friends. It connects different people in numerous ways through so many applications including WhatsApp, Messenger, Twitter, Telegram and Instagram, etc. People are so oblivious these days because one touch finger can approach the whole damn world.

“Social media websites are no longer performing an envisaged function of creating a positive communication link among friends, family, and professionals. It is a veritable battleground, where insults fly from the human quiver, damaging lives, destroying self-esteem and a person’s sense of self-worth.”

Social media has traumatized so many people with harmful content. Nowadays, social media is misused by many people. Many ruinous people(by nature) are using this platform as a way to spread grudges and indoctrination against an individual, group, whole community, and nation. These particular people use social media as a platform to manipulate people by spreading unauthentic news, grudged speeches, and false rumors. This false perception leads individuals’ thoughts and opinions on plentiful matters in a contradictive direction. This leads to the development of inappropriate and or damaging behavior among people which will be against the well-being of the society.

A lot of unsavory activities (ranging from fraud, and identity theft to outright blackmail) have been known to be carried out using social networks as a platform but in retrospect, varying degrees of positive achievements (such as the building mutually beneficial relationships and ties, reestablishment of lost contacts and effective communication) has also been recorded using social networks.

A smear campaign also referred to as a smear tactic or simply a smear, is an effort to damage or call into question someone’s reputation by propounding negative propaganda. Spreading of fake news or offensive religious views about a specific community can lead to misunderstanding or contradictory opinions among different communities. People use this platform to pull out the hatred inside their hearts and want to defame their enemies. This can cause various disastrous effects on the victim.

“The problem with smear campaigns is that too often they work.”

Smear tactics are considered by many to be a low, disingenuous form of discourse. Fake news is a big thing in the field of Social Media Journalism. Fake news can be as simple as spreading misinformation or as dangerous as smearing hateful propaganda. Propaganda, misinformation, and disinformation have always been part of political warfare. Social media and other new platforms have given it a new life and reach through which the fake news phenomenon can reach everywhere.

Recently, on June 10, 2020, Dr. Arfana Mallah expressed her dismay on Twitter when a colleague at Shah Abdul Latif University in Khairpur, Sindh Province, was arrested on charges of blasphemy and sedition. Within hours, Dr. Mallah was subjected to a vicious campaign led by clerics.

In April 2018, as part of the #MeToo movement, Meesha Shafi accused Ali Zafar of sexual harassment. In November 2018, Ali Zafar had filed a complaint with FIA cyber crime wing

Lamping the light on the negative side of social media where violence is the most common perspective. It plays a vital role in youth violence. In a society, where youth are so involved with their virtual life the boundary between real and reel has become pretty thin. Today’s youth share all of their emotions like love and hate, aggression and violence over these social media platforms.

The victims of social media violence are negatively influenced and become depressed. It has been found that cyberbullying has become a very negative part of the social media life of these youngsters. We have become so irresponsible and immature that we can’t even think two steps ahead about what impact our pessimistic behavior will have on the victim and the way this can negatively brunt their psychological state and life.

The real-life street violence has transformed into cybercrime and cyberbullying. Youngsters, who have been victimized earlier, are also actively participating in social media violence. These include bullying, gang violence, and self-directed violence that occurs specifically through social networking sites.  Exposure to violence has a negative impact on youth mental health, academic performance, and relationships.

Thanks to social networking sites, the geographic walls that divide individuals are crumbling and new online communities are emerging and burgeoning. We are living in a dramatic shift in information and communication technologies that are completely transforming how we communicate and engage with the world. Some people use social sites as a platform to release their stress and frustration by indulging in pessimistic activities to satisfy their egos. Cell phone cameras and these sites turn individuals into on-the-spot reporters and are capable of taking pictures and videos of violence, sending them to friends, who then distribute that awful images onwards, providing the mass-media type coverage in just seconds.

Mental and physical health totally depends on the lifestyle of a person. Human beings need face-to-face contact to sustain their mental health. Nothing reduces stress and boosts your mood faster and more effectively than eye-to-eye contact with someone who loves, fosters, and cares about you. You’re more resistant to anxiety and depression if you prioritize social network communication more than face-to-face. Life is so complex with such exacerbating and embitter issues like depression and anxiety attacks.

It is a mental disorder that can create numerous concerns in many aspects of the sufferer’s life. The disabling moods of depression can damage a person’s marriage, family relationships, friendships, job performance, and health. The longer depression persists, the more widespread the damage. Major depression can result in people shutting themselves off from the support of friends and family or striking out violently by verbally and physically attacking others. Most people feel low and sad at times. However, in the case of individuals who are diagnosed with depression as a psychiatric disorder, the manifestations of the low mood are much more severe and they tend to persist.

Depression occurs more often in women than men. Some differences in the manner in which the depressed mood manifests have been found based on sex and age.

In men, it manifests often as tiredness, irritability, and anger. They may show more reckless behavior and abuse drugs and alcohol. They also tend to not recognize that they are depressed and fail to seek help. In women, depression tends to manifest as sadness, worthlessness, and guilt.

Depression is more likely to manifest in children as school refusal, anxiety when separated from parents, and worry about parents dying.

Depressed teenagers tend to be irritable, sulky, and get into trouble in school. They also frequently have co-morbid anxiety, eating disorders, or substance abuse.

In older adults, depression may manifest more subtly as they tend to be less likely to admit to feelings of sadness or grief, and medical illnesses which are more common in this population also contribute to or causes depression.

Harassment using electronic media is “cyberbullying” or “cyber harassment”  that occurs through SMS, MMS, Text, and apps, or online in social media forums, or gaming where people can view, participate in, or share content with each other. About 10 percent of the youngsters are subjected to cyberbullying and thousands of them reported being bullied by worst heart-wrenching comments daily. A Lot of youngsters are targeted to death by some cruel human. Social media platforms such as Twitter are hotspots for spreading detrimental rumors, lies, wrongdoings, and abuse that can leave lasting sentimental scars.

Verbal bullying is harassment by saying or writing mean things and pulling out your grudges by using your tongue. Taunting, teasing, Name-calling, Threatening to death, and Sexual harassment going around in our societies.

Social bullying is hurting someone’s reputation and relationships usually through social apps. These include spreading rumors about someone and worsening their reputation by infamous them among thousands. Embarrassing someone in public and writing abominable comments.

Physical bullying is hurting someone’s possessions and body by making mean and rude hand gestures. Kicking and beating someone in groups. Pushing or kicking someone while passing by them. Victims by them become traumatized. This is the worst type of bullying that needs serious action against the wrongdoer.

Survey Regarding Cyber Harassments In Pakistan:

This survey was made by ‘Telenor Group’s Multi-market Asia in 2017’ that reveals that 22.5% of children were being the target of hostile and rude comments and profanity online. Whereas, the other main point that was revealed is that students and elders, everybody’s learning how to cope with online bullying.

The recent launch of ‘Safe Internet Guide’ in multiple languages teaches the parents on how to talk to children about using the internet for fun and learning while avoiding all forms of cyberbullying.

First, this captures the self-awareness and agency of feminists in their tactical use of media to circumvent censorship. Masquerading in the digital era is an active and self-conscious act leveraging the specificity of media practice to set the media agenda, increase public influence, and avoid censorship.

Second, masquerading refers to the digital alteration of images in order to tactically represent women’s bodies in public spaces while circumventing censorship and possible criminalization. It highlights the figurative and the corporeal in online digital activist culture, which are oftentimes overlooked in the existing literature.

Third, while the masquerade in psychoanalytic theory emphasizes individualized gendered identity, the notion of digital masquerade points to the interface between the medium and the subjects, which involves collective efforts in assembling activist activities and remaking publicness.

Everyone is comparing lives on social media and wants the perfect body, perfect image, perfect outfit, perfect life – we’re striving for this perfection, and it’s so unhealthy because there’s no such thing as perfection.
Sharing endless selfies and all your innermost thoughts on social media can create unhealthy self-centeredness and distance you from real-life connections. People have started to impress others by coloring themselves in shades; they actually are not. People have become so inadequate or disappointed in their lives. This leads to severe side effects that are actually damaging their minds in negative aspects.

“Everyone is comparing lives on social media and wants the perfect body, perfect image, perfect outfit, perfect life – we’re striving for this perfection, and it’s so unhealthy because there’s no such thing as perfection.”

The following behaviors are regarded as antisocial Internet behavior:

(1) the use of the Internet to carry out illegal activities such as selling fake products or offensive pornographic materials.

(2) the use of the Internet to bully others (i.e., cyberbullying) such as distributing libelous statements against a certain person.

(3) the use of the Internet to cheat others.

(4) the use of the Internet to do illegal gambling.