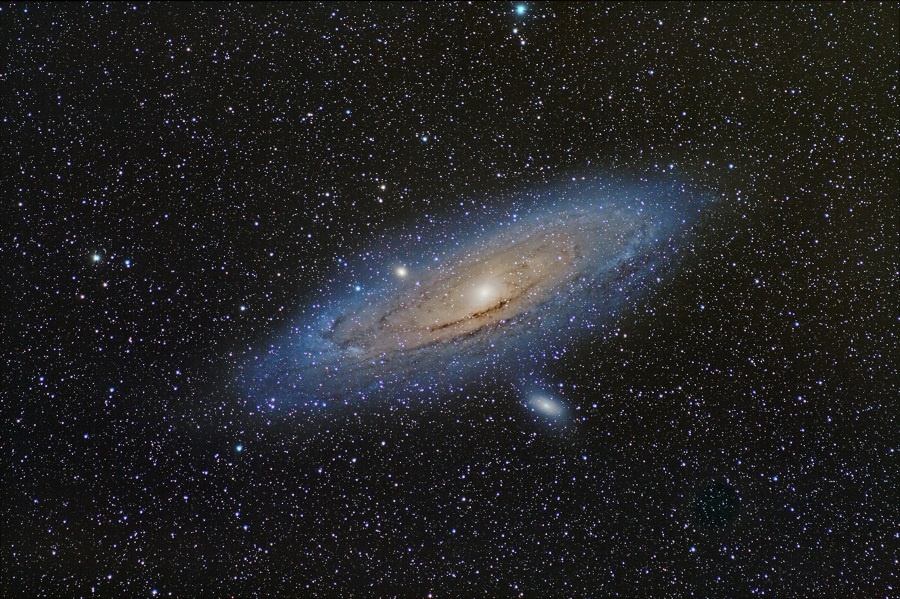 This universe is an amalgamation of planets, stars, sun, moon, asteroids, and many other unknown elements present in space. The center of our solar system together with the planets surrounding it is the part of the galaxy known as the Milky Way Galaxy. Galaxy is the group of stars, gases, and dust particles that are bound together by gravitational force. They are of various shapes. Milky Way Galaxy is the spiral galaxy.

Have you ever noticed the starry band across the dark sky? Do you think about a spiral galaxy? Yes, both of the observations are correct. It refers to our home galaxy which is composed of hundreds of billions of stars and our sun is one of them. In ancient times it was possible for everybody to observe it in the sky when the night sky was not covered with the street lights at night. They saw a ghostly band of light across the heaven. They also observed that this graceful arc moves across with the seasons. Most of the sky-watchers observe that the part of the band is surrounded by the darkness to which we called vast clouds of dust nowadays.

Then in different cultures, different myths grew about this mysterious apparition. They were explaining it according to their own beliefs. When we observe it in the sky away from the light pollution it appears like clouds.  But still, nothing was known clearly unless a telescope was invented. Just observe it with the help of a small telescope and you will be surprised by the beauty inside it. It is a replica when you observe clouds directly it appears solid but in reality, it is made by the countless water droplets. The stars in the galaxy merge together forming a band of light.

Why it is called so?

All the stars that you see in the sky while observing from your backyard are part of our galaxy. If you ponder, at some of the dark points, the galaxy appears like a milky band of light in the sky. Due to this milky appearance, our galaxy is known as Milky Way Galaxy. It stretches across the sky forming a milky appearance. However, it is difficult to locate it in a current polluted environment. But you can observe it in rural areas where it becomes dominant in the sky. It was named Via Lactea by ancient Romans which means “The Road of Milk”. According to the Astronomy Picture of the Day website, the word galaxy is derived from the Greek word which means “milk”.

There are some superstitions and conservative views that are also related to it. For example, there was a Greek myth that goddess Hera has sprayed milk across the sky. In other parts of the world, it is known as some regional names such as “Silver River” in China and “Backbone of Night” in the Kalahari Desert in Southern Africa.

Diversity of the Milky Way Galaxy:

It is not possible to count the exact number of stars while being in our position in the solar system. You can consider it from an example if you have a 10-pound heavy bag containing pennies, coins, grains, rice, etc. Now you can’t count the total number but can only estimate the visible part from the top.

You may guess that the visible part of the bag is 1/10 part of the total. So with counting one-tenth of parts, you can estimate the whole number. One of the estimations says that there are nearly 100 billion stars and at the higher-end, they are 400 billion. They are forming a large disk whose diameter is 100,000 light-years. The solar system is 25,000 light-years away from the sun. So we live in the suburb of our galaxy. Our sun goes around the Milky Way Galaxy as Planets go around the sun. And it takes almost 250 million years to go around the galaxy.

How do we know it is spiral in shape?

As we have discussed that Milky Way Galaxy is huge enough that we can only estimate about it diversity. We can count the number of stars while living in it. Then how is it possible to tell about its spiral shape when we can’t see it wholly?

Direct observation from the ground:

There are several clues about it. When we observe dark regions in the sky when it becomes dominant, it appears in the form of a spiral disk. The stars inside the disk seem flat. So it tells that galaxy is basically flat or spiral.

Observation through a telescope:

Also several ground of space telescopes has taken images of the disk in several directions. It is like taking a panoramic picture with your camera or phone. If we find a chance to live in an elliptical galaxy then we will observe that the stars in our galaxy are spread around, not in a single band. The concentration of the stars gives us evidence of their shape.

Astronomers get another clue from the young hot stars and ionized hydrogen gas. It forms clouds of hydrogen that get ionized with the hot stars forming free electrons and protons. It forms spiral arms which act as markers. These markers are present in other spiral galaxies so the presence of spiral arms in our own galaxy shows that the shape of the galaxy is spiral. They are very bright that we can observe it through the disk of our galaxy except for the center of our galaxy gets the way. There is a debate over that how many spiral arms are there in our galaxy. Some say it has two arms and some say four.  The latest data shows that it has four arms.

There are some additional clues from the physical appearance to tell us about its shape. Scientists measured the amount of dust and the dominant color of the galaxy. Then they compare it with the already known galaxies and the data matches with the spiral shape galaxies. All data add up to the present picture of the Milky Way Galaxy.

About two years ago a major discovery was made. It showed that the Milky Way galaxy is not spiral rather it has some of the “kinks” which are running across it like extended “S”. There is something that has wrapped the disk. There are some of the finger points also at the gravitational influence of the Sagittarius galaxy. Perhaps it is one of the twenty small galaxies that orbit our own galaxy which is like a moth around a flame. As it orbits around our own galaxy so the gravitational influence has pulled our stars which eventually creates warp.

Our galaxy is surrounded by the halo of globular clusters. The concentration of stars looks like fuzzy golf balls. Maybe it contains a million or so extremely ancient stars. It is believed that we will make more landmarks to discover new realities about our galaxy. The study of its nature is providing a new astronomical tool. For example, European Space Agency’s orbiting Gaia telescope is trying to make a three-dimensional map of our galaxy’s stars.  It allows them to see that where stars are and in which direction they are moving. This is an incredible map that has shown some of the previously unknown features of our Milky Way Galaxy. It is very interesting to know the diversity and depth of the galaxy. The data that we have received is not only unveiling our own galaxy but also telling about other spiral galaxies too.

This universe is diverse which is made by billions of galaxies other than our own Milky Way Galaxy. We can only observe three galaxies outside which can be even observed without a telescope. It appears like fuzzy patches on the sky with the naked eye.

The closest galaxies near our galaxy that we observe without a telescope are small or large Magellanic Clouds. It can be seen from the southern hemisphere and it is almost 2.5 million light-years away from us. Research predicts that it is getting closer to our galaxy. And it may be possible in about 4 billion years that it will collide with the Milky Way Galaxy. The other galaxies are very far from us and can be observed without the help of a telescope.

The Milky Way galaxy is one of the billions of galaxies that are present in this diverse universe. We live in Milky Way Galaxy. It has a spiral shape which can be observed by direct observation from the ground in rural areas where there is less light pollution. Also, several shreds of evidence provided us with the data that tells us about the shape of the galaxy. It is a union of billions of stars, clouds, gases, planets, and the sun.

Our sun orbits around the center of the Milky Way Galaxy as the planet orbits around the sun. It appears like a milky band of light on the dark region of the sky which was known by the various myths or beliefs in ancient times. Then the discovery of the telescope opened various realities. We are able to observe it closely and find out the innovations. Such as the latest data reveals that Milky Way Galaxy is not spiral in shape but has some kinks in it. Also, astronomers are able to get a three-dimensional view of the galaxy to know the number of stars present in it also the way they move, and how fast they move. But still, there are several hidden realities that need to open up in near future.

What is a black hole?
What are asteroids?
To Top