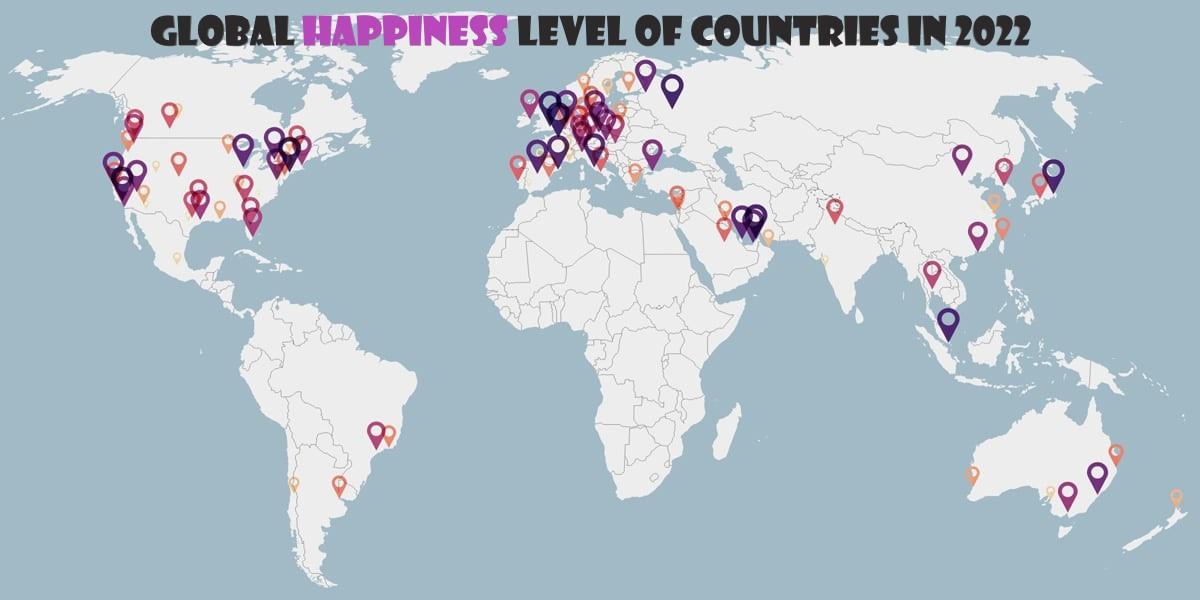 For the past decade, the word happiness has been extensively used all over the world. People are so focused to be happy in their lives. Every single person strives to bring happiness in their life. Right now the whole world facing the crisis of COVID-19 and the focus on the happiness of people become the talk of the day all over the world. The happiness of a person also becomes the focus of attention because the world realizes that happiness isn’t something that comes from just having a lot of money, a good lifestyle, warm weather, and sunlight. The world happiness report published by the UN proved that happiness isn’t something that comes from how developed the county is, how beautiful the weather condition is or how much money you make.

Happiness is difficult to measure but the UN initiative tries hard every year to measure the happiness level of every country in the world. The UN Sustainable Development Solutions Network has been publishing its “World Happiness Report” every year since 2012. In this report, they try to figure out the connection between the development level of the county and the happiness level of people. What exactly is the reason behind people’s happiness? Many researchers are working hard to answer this question. But in reality, it is a very difficult question to answer properly. Because the level of happiness depends upon many factors such as freedom, social support, financial security, and so on.

Warm weather, sunlight, and money could not bring happiness to a person’s life. The annual World Happiness Report proves that the happiest people in the world are people who pay high taxes, swim in ice-cold water, and live in frigid temperatures. The Nordic countries continuously occupy the top spot in the UN’s Global Happiness Report. United nation’s Annual Global Happiness Report has been released this year a few days before the Annual International Day of Happiness. United Nations-sponsored report is celebrating its 10th anniversary this year by releasing this report.

Finland was named the happiest country in the world this year. Finland is keeping this spot for five consecutive years. Afghanistan ranked as the least happy county in the world. This is because of the low life expectancy rate and low GDP rate per capita. This report tells us the average happiness score for approximately 146 countries worldwide. It also uncovers the average happiness score of counties from 2019-to 2021. This report tells us which country is happiest and which one is unhappy and also highlights the reason behind their happiness and unhappiness.

The researchers compare each country’s data properly by creating a fictional country “Christened Dystopia” filled with “the world’s least-happy people.” Afterward, they set Dystopia as the rock bottom value in each of the six categories. Then they measured the scores of the real-world countries against this value. All six variables were then blended to create a single combined score for each country.

As we are facing the global crisis of the COVID-19 pandemic and it is been the third year the world facing this challenge. This survey helps a lot to look into how different countries and their people doing during this pandemic. This also helps to look forward to the future that how the science of well-being going to evolve. This pandemic period is hard for everyone but it also has some positive impact on the people. The Gallup World Poll report found that the average percentage of life evaluation was shown some realistic outcomes since the pandemic.

This report shows that there is remarkable growth in all three acts of kindness globally. These acts include charity donations, helping strangers, and volunteering. These benevolences reached up to 25% worldwide as compared to pre-pandemic prevalence. Especially the act of helping a stranger is increased by a very large amount in 2021 as compared to the pre-pandemic era in almost every part of the world.

There is another positive impact of the pandemic on people is that the positive emotions were two times more frequent than the negative emotions as a whole. This report also keeps an eye on the countries where the happiness level is extremely low.

The average score of worldwide happiness is 5.6. These scores are slightly improved from last year’s report. The happiness level of all regions in the world is given below.

As shown in the figure the current mood of this region is happy at 6.3, which is 11.8% higher than the global average. In this region, Canada is the happiest country and the Dominican Republic comes as the least happy country in North America. As a global ranking, the USA climb three places from the previous spot and come to 16th place right under Canada. The Dominican Republic became the least happy country in this region because due to the pandemic there are so many people fall into poverty in the year 2020.

The current happy mood of Europe is 6.5, which is 13.8% higher than the global average. Finland is the happiest country not just in Europe but in the worldwide ranking. It is the happiest country in the world for the constructive 5th year. Finland is one of five Nordic countries that continuously come to the top 10 spots in the UN global happiness report. Denmark is the second happiest country worldwide and the third place is occupied by Iceland. Romania become the most improved country in this region. Moreover, it is also leveling up to 18 spots as compared to last year’s report in the worldwide ranking. Ukraine is the least happy country in this region. There are so many challenges that Ukraine has been facing such as the Maidan uprising in 2014. Now things got worst due to the Russian invasion of Ukraine in February 2022.

The Middle East And Central Asia

The current mood of the Middle East and Central Asia is 5.2. Reporters say It is a complicated state, which is 5.7% lower than the global average scores. The happiest country in this region is Israel which is also ranked 9 as the happiest country globally this year. In the Middle East and Central Asia Turkmenistan is the country that is more improved this year and in global ranking rise about 19 places above. In this region, Afghanistan is the least happy country. Moreover, it is also the least happy country in global ranking with a score of 2.4.

The Current mood of Africa is 4.5 and is considered the unhappy region worldwide. Its scoring is 24.4% lower than the global average scoring of happiness level. In this region, the least happy country is Zimbabwe because of its extreme poverty level.