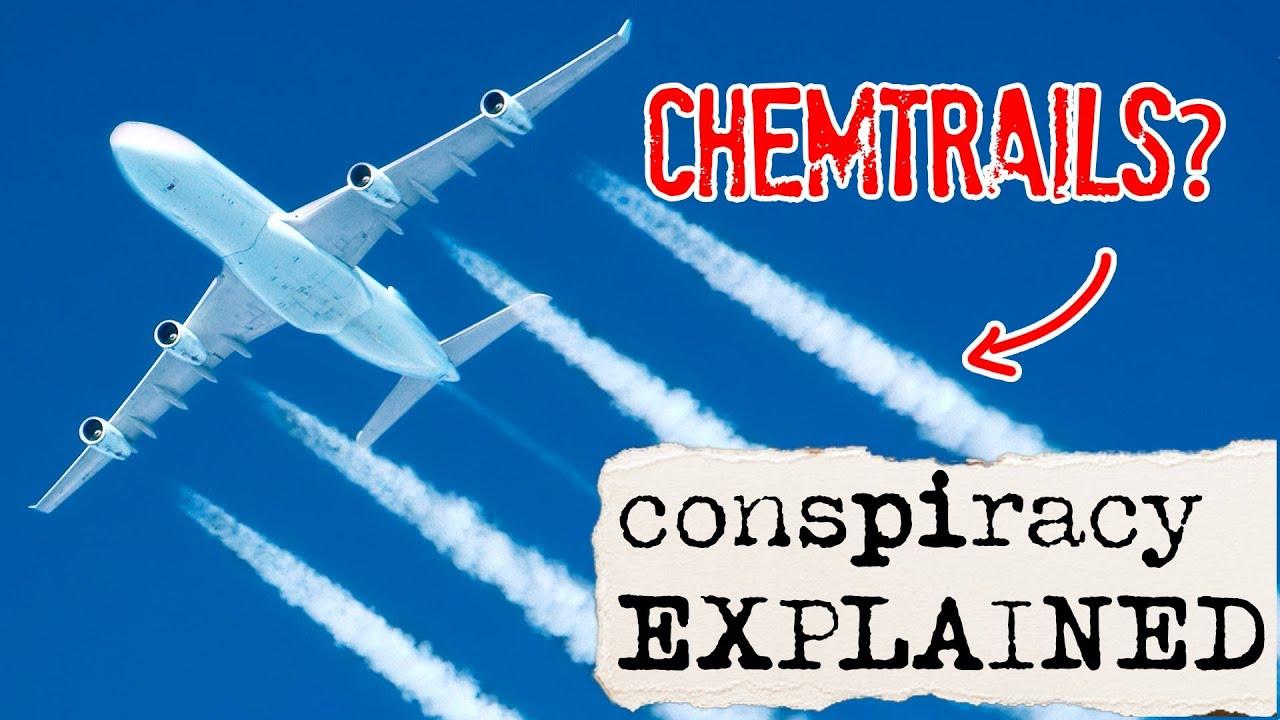 Chemtrail conspiracy theory (also known as the chemtrail myth, the chemtrail hoax, or simply chemtrails) is the belief that long-lasting trails left behind aircraft are chemical or biological agents deliberately sprayed at high altitudes for purposes undisclosed to the general public in clandestine programs directed by government officials. Believers in the conspiracy theory typically reject official explanations. Such as that they are mere vapor trails from jet aircraft engines. And instead often subscribe to one of several overlapping theories about covert aerial activities by governments around the world.

Chemtrails are a type of environmental modification technique (EMT) or geoengineering. Geoengineering is an attempt to manipulate, mitigate, or reverse global warming by intentionally manipulating the earth’s climate systems. (That should give you an idea of how much we don’t know about climate change). The theory is that we can put chemicals into the atmosphere to try and counteract greenhouse gases and human activity.

So what are chemtrails? They’re a type of EMT that most scientists agree doesn’t exist and may never exist. But it doesn’t mean it won’t happen—and it hasn’t stopped many conspiracy theorists from believing chemtrails actually do exist. This leads us to another question: How do you know if they exist? That’s where things get tricky.

Chemtrails are a type of aircraft contrail that is popular and associated with various conspiracies involving weather modification. Believers in chemtrails claim that normal contrails dissipate fairly quickly. But that those labeled as chemtrails linger for an abnormally long time. It forms criss-cross patterns in the sky and varies with available atmospheric moisture content.

Believers also claim that chemicals are there in trails to cause harm to those below; these believers have even identified dispersal areas on maps (usually near military bases). Chemtrail theorists often point out that there is little scientific support for their claims.

How they are made

Contrails are basically condensed water vapor made by airplane engines. They comprise roughly 10% methanol, which makes them easy to see against a blue sky. The most interesting thing about contrails is that they have a useful side effect. It turns out that much of what comes out of a plane engine is tiny particles of sulfuric acid and water molecules that freeze into ice crystals in mid-air.

These are aerosols, which help form clouds (because they’re so numerous). And also seed cloud droplets with sulfuric acid molecules (the stuff in battery acid). This makes them even more reflective, allowing light to bounce back into space instead of reaching Earth’s surface.

Why do we use them?

Chemtrails are part of a clandestine geoengineering program, colloquially refer as stratospheric engineering. Its use is in climate engineering which intends to combat global warming by first spraying fine particles of materials. Such as aluminum into the stratosphere, which would then reflect some solar radiation back into space.

Proponents have proposed using Persistent contrails (chemtrails) from aircraft Engine Exhaust Particulates(PME). Such as barium salts or aluminum oxide in combination with reflective nano-materials. Such as titanium dioxide or carbon black to create a sunlight-reflecting cloud over an area. These chemicals and metals allegedly cause respiratory problems in many people and animals and make them susceptible to infections.

Who’s behind it all

There are lots of theories out there, but two stand out. The CIA and/or U.S. military, who have been developing new energy weapons, or those who believe we’re being poisoned by chemicals released into our atmosphere for various purposes ranging from weather modification to population control. While there’s no direct evidence to back up either of these claims. Some folks insist that evidence does exist—it’s just a matter of looking closely enough.

Evidence pointing to their existence

Since at least 1999, a cadre of conspiracists has asserted that commercial or military aircraft are spraying chemicals on an unsuspecting public. In a 2007 survey, 3 percent of respondents believed the US government is conspiring to control weather patterns. And 4 percent say they concerns about mind control techniques use by ‘secretive power elite groups’ to manipulate people.

Even if these theories seem paranoid, it’s worth noting that some chemtrails contain compounds used in commercial pesticides and cloud seeding. And while it’s important to note that scientific studies have found no evidence of harm from so-called contrails, both sides in mainstream politics. Former Oklahoma Sen. James Inhofe—has argued over whether their existence proves climate change is a hoax.

The conspiracy part of the story

Believers are convinced that government agencies are creating and releasing harmful chemical substances into our atmosphere. Some of these chemicals are supposedly reflective, like aluminum oxide or barium titanate, which would serve to block out parts of the sun for global cooling; others may be biological, like fibers or artificial viruses.

These theories do have some basis in fact—airplane exhaust does include carbon dioxide and water vapor (that’s what makes contrails), but nobody is spraying us with chemicals from 30,000 feet. The plane exhaust happens naturally and it forms perfectly ordinary contrails as it cools from its original gaseous state.

Mainstream science’s reaction to them

Conspiracy theorists claim that they are part of a government plot to control and/or harm people, but mainstream science doesn’t acknowledge their existence at all. In 2013, Popular Science investigated chemtrails, only to conclude that they don’t exist at all.

The magazine reported that all known contrails (the proper term for condensation trails) are produced by jet engine exhaust or by other planes in flight, not by any secret government program. There’s one exception though: cirrus clouds can sometimes form into thin strands called cirrus filaments if there is an unusual amount of humidity and temperature inversion.

When did people start noticing them?

While there are occasional reports of suspicious vapor trails in local media and scientific literature dating back to as early as World War II, it wasn’t until 1995 that a dedicated community started to form around what’s now known as chemtrails. A San Diego radio host named Dave Ryan discussed how unusual vapor trails were appearing over his area; callers were quick to point out they were not contrails but something entirely different.

Soon thereafter, websites appeared and theories began taking root in online forums—and it was all pretty much downhill from there. Various chemtrail theories focus on alleged toxins being sprayed into the atmosphere for population control or weather modification purposes, among other justifications.

Is there a cure for the so-called disease causing them?

No, but chemtrails aren’t diseases, despite what believers claim. They’re nothing more than contrails produced by airplanes when they use special chemicals to produce clouds that are supposed to reflect sunlight away from Earth or perhaps even contain biological agents that are designed to harm humans or animals in some way.

In reality, contrails form when condensation occurs in aircraft exhaust as it mixes with the cold air outside an airplane at high altitudes. In other words, contrails are nothing more than vapor trails from jet engine exhaust and should be no different than steam coming off a locomotive or cigarette smoke wafting through an alleyway.

While many people take chemtrails seriously, there is very little evidence that they exist. The problem is, even if we could find evidence of chemtrails, that wouldn’t say anything about who’s doing it and why. If alien abductions or Satanic cults or Big Foot really existed, that wouldn’t actually prove those things were real; only prove that they weren’t hoaxes. The same goes for chemtrails. There are a few theories floating around but without physical evidence (actual photos of planes spraying aerosols), it’s impossible to know for sure what’s going on.