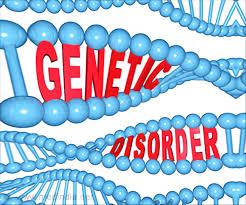 The human genome is a complete set of instructions, just like a recipe book, administering growth and development. Nonetheless, the human genome can face mutations which can affect the individual bases (A, C, G or T) or much larger clumps of DNA or even chromosomes. DNA confers the code for making proteins, combination of amino acids performing most of the functions in body. When a part of DNA is altered in some way, the protein it codes for is also affected. As a result, it may not be able to perform its normal functions. Most probably, it depends on the location where these mutations occur; they may exert little or no effect, or may change the biology of cells of the body, resulting in a genetic disorder.

Any disease caused in whole or in part by an abnormality in the DNA sequence away from the normal sequence is referred to a genetic disease. The genetic disorders can range from minuscule to major. They may be the result of a mutation in one gene (monogenic disorder), mutations in multiple genes (multifactorial inheritance disorder), combination of gene mutations with the environmental factors like cigarette smoke and exposure to radiation, or any damage to chromosomes (alterations in the number or structure of entire chromosomes).

Genetic disorders can also include specific kinds of birth defects, developmental problems, sensory deficits, and chronic diseases that are inherited from one or both parents.

These signs are indications of chronic diseases:

These signs can indicate developmental problems:

Some of these signs can be same for conditions that are not inherited and may appear during childhood (learning problems or developmental delays) or at birth (congenital heart disease, cleft lip, or palate).

The following signs may indicate the possibilities of genetic disorders. However, these features can typically found in people without disorder. Consult your doctor when notice two of the following features:

Different types of genetic disorders (probably inherited) may include:

Single mutated gene causes a single-gene disorder (or monogenic disorder), also known as Mendelian or monogenetic inheritance. It can be passed on to subsequent generations in multiple ways. Genomic imprinting and uniparental disomy can affect inheritance patterns. The cleavage between recessive and dominant kinds are not “hard and fast”, even though the cleavage between autosomal and X-linked types are.

There are hundreds of known single-gene disorders. Also, they have different patterns of genetic inheritance, including:

Most congenital metabolic disorders are called inborn errors of metabolism that result from single-gene mutations. A lot of such single-gene disorders can lower the fitness of affected people and are thus present in the population in relative lower frequencies when compared to what would be expected and on the basis of simple probabilistic calculations.

The major examples of single-gene disorders are:

Most probably they refer to the complex diseases cause by changes in more than one gene, more often in a complex interaction with lifestyle and environmental factors like diet and cigarette smoke.

Multifactorial disorder usually clusters in families signaling they do not have clear patterns of inheritance. They are also difficult to study and handle as the certain factors causing most of these disorders have not yet been characterized. Several methodological can be used to check associations of genotype–phenotype in order to identify the cause of complex disorders. One method is the genotype-first approach which may start by identification of genetic variants and then determining the associated clinical manifestations. This is contrary to the traditional phenotype-first approach, and can specify causal factors that have initially been obscured by clinical heterogeneity, penetrance, and expressivity.

Examples of multifactorial inheritance include

This type of disorder is also called as maternal disorder. It is quite rare and applies to the 13 genes encoded by the mitochondrial DNA. Only affected mothers can pass the defective genes of mitochondrial DNA to their children because only egg cells contribute mitochondria to the developing embryo.

A majority of mitochondrial diseases, specifically when symptoms develop in early life, are typically caused by a nuclear gene defect. This is because the mitochondria are mostly developed by non-mitochondrial DNA. Mitochondrial disorder often follows autosomal recessive inheritance.

The DNA mutations due to Mitochondrial disorder may cause the mitochondria fail to generate enough energy to sustain the body’s cells. This disease can affect any organ or part of the body. The symptoms depend on the part of the body the disorder affects. A few common symptoms may include:

Currently there is no highly effective treatment for mitochondrial genetic disorder. But nutritional management, vitamin supplements, amino acid supplements, and medications to help treat specific issues like muscle weakness or seizures, can reduce the symptoms.

Examples of this type of disorder are:

Chromosomal abnormalities usually develop when there is a defect in cell division. Usually these defects occur within the egg or sperm, but they can also develop after conception. It is also possible to inherit a disease directly from a parent however; some people may develop for the first time.

The common types of chromosomal disorders can be described in the following way:

These chromosomal defects account for only about 6% of all the birth defects.

The list below gives some examples of chromosomal abnormalities.

In case of a family history of a genetic disorder, considering genetic counseling is important in order to check whether genetic testing is appropriate for the diseased or not. Lab tests can clarify if gene mutations are responsible for that condition. Important thing to consider is that carrying the defective gene does not always mean ending up with it. Genetic counselors may explain the condition better by protecting your health by taking essential steps.

DNA testing for genetic disorders, in case of a family history, can be a significant part of starting a family. A few courses of action may include:

Most of the genetic disorders do not follow a proper cure. While some have treatments that may slow the rate of disease progression or just lower their impact on life. The type of treatment, however, depends on the type and severity of the genetic disorder. Try to catch complications early with the help of medical surveillance, like: