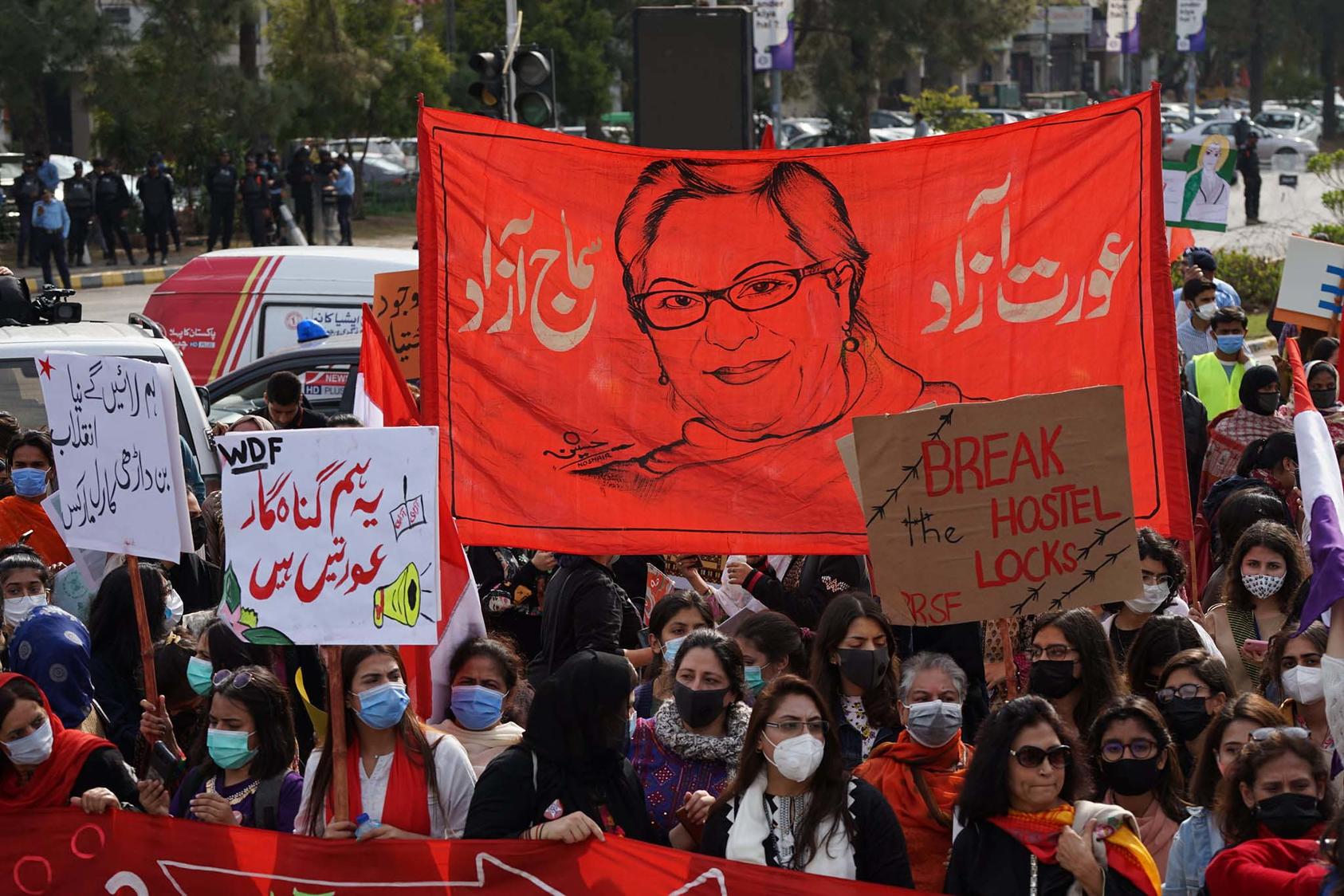 Feminism is the set of movements that aim and establish to fight for women’s rights.  Equal rights include equal political, economic, and social rights, alongside equal opportunity. Historically, the establishment was in response to the national and global reconfiguration of power that includes colonialism, nationalism, dictatorship, democracy, and the War on Terror. Women’s subjugation is for decades. These movements’ establishment was in response to the conscious raising of those inequalities.

Pakistan is the third-worst country on the Gender Parity Index of the World Economic Forum. In Pakistan women, the literacy rate is so low that about five million primary-age girls do not go to school. According to UNICEF, about 18% of girls marry before age of 18. The ratio of forced conversion and marriage is difficult to estimate because of the poor reporting and complexity of the crime. Generally, there are 100 to 700 Christian girls who suffer from this trauma. According to Zoya Rehman, the image of Pakistani womanhood is the image of Pakistan as a state. Women have to guard their chastity, honor, sexuality and there was a practice of honor killing whenever she tried to go against the traditional norms.

According to Afia S. Zia, a state does not stop controlling women unless this narrative comes in the public or private sphere of women to decide what is permissible or what is not. After independence elite Muslim women played their best role for women empowerment in various sectors in order to bring legal reforms. An attempt was made to include women’s rights in the charter of the 1956 constitution but it was not successful. Women got the right to own all forms of property by the enforcement of Muslim sharia law. According to the 1961 Muslim Law of the ordinance, women got the right to take divorce which was considered as one of the most important steps towards the success of women empowerment. These sociologic reforms rose Feminist drive in Pakistan, are still widely regarded as empowering to women.

After independence women were highly affected. According to a report, almost 75,000 women were abducted and raped after partition. In response to the need of the hour, Fatima Jinnah came forwards and made the Women’s Relief Committee, which later evolved into the All Pakistan Women’s Association. Begum Rana Liaqat Ali Khan also did not remain behind and founded the All Pakistan Women’s Association in 1949. She helped the refugees who fled India. At that time nursing became the most adopted profession by women. She continues her work even after her husband was assassinated in 1951. She became the first female Muslim delegate to the United Nations in 1952.

In 1970, there was a U-turn in which Muhammad Zia-ul-Haq gained power. He was a dictator and after gaining power he started the initiation of Islamisation in the country. It was the rise of the Islamisation of Pakistan.  As the result of these reforms in the country, there was the implementation of Sharia Law, and a strict punishment was placed for the one who tried to go against the limitations set by the religion. There was a punishment of fornication or adultery in the form of stoning to death the perpetrator.

The feminist movement in Pakistan opposed this idea by claiming that it is all based on the wrong interpretations of religious thought. They demanded a liberal Pakistan in which everybody has the right to live as he/she wants to. They argued that it should be a very personal choice of a person to follow a specific ideology and act as he wants to. If the state will interfere in this way then we will end with a lot of injustice and cruelty. It is a replica of snatching a basic human right which is freedom of will. So after a lot of criticism and resistance, the law was revised by the 2006 Women’s Protection Bill.

In 1981 Women’s Action Forum (WAF) was formed. According to Madihah Akhtar, Gen Zia is trying to morally police the women that how they can act in a public sphere. She further says that it is causing harm on the part of women by increasing pressure on her even in the private sphere also. Many Pakistani women, including writers, academics, and performers, became active in the opposition of these policies to cause hurdles in their way. She argues that the 1980 generation of the country is of a feminist perspective.

They used the modern interpretation of the Islamic laws to vanish the harms; the country was facing due to conservative thoughts. It gained a lot of popularity among the right-wing Muslims because it was like a solution to the existing problems. This progressive interpretation of Islam or modernization gained popularity through various mediums, such as newspaper articles, art, poetry, and song.

After Gen Zia’s tenure ended the first Muslim female gained power in 1988. She was Benazir Bhutto. After this, many feminist legislative attempts were made. It includes the founding of all-women police stations and the appointing of female judges for the first time. However, many of the anti-feminist laws made by Gen Zia still remained. In the post-Zia era, there was the production of the first Pakistani research and awareness-raising material regarding sexual abuse and reproductive rights.

Feminism in Pakistan got popularity or a U-turn in 2008. It was the era of social media or private media channels. Women around the country started sharing their beliefs, ideas, and harsh experiences of their life. As the result, there was awareness-raising among youth at a pace. They started acknowledging those facts and thought about fighting against them. In 2016, there was a rise in the Aurat march and the participants protested in various cities. The demands equal rights for women in the public or private sphere. It includes equal rights for holding property, workplace, wages, career selection, etc. It seems like the fourth wave of feminism in Pakistan has been started in wake of the inequality burden which is increasing day by day.

On 8 March, International day of women, many women across the country gathered and marched to whom they named Aurat March. It is a fight against domestic violence, abuse, harassment, and demand for equal rights. They also asked for the rights of minorities, forced conversions, and early marriages. In Pakistan where women are already prone to suffering, the COVID-19 pandemic has increased the risk of gender-based violence. This movement march in 2016 for the first time with a very small group of participants. Now every year they march annually for women’s rights with a different theme. Also, this circle is expanding with time because of the consciousness-raising via social media or various organizations working for this purpose particularly.

Although this circle is increasing with time we should also acknowledge a fact that religious conservative thoughts are also gaining power. The conservative discourse considers modernizations as a western agenda and a threat to Islamic thoughts. As the result, Pakistan’s Taliban movement has escalated the threats to the women marching against inequality. They have a concept in their minds that women are created less than men. A man is the ruler and commander of a woman and if she tries to consider herself in an equal position then she is going against the shari’ah. For designing propaganda against March they decorated a woman in which they showed those women as blasphemous. And the punishment of blasphemy is death in this country. So all they want is to root out this movement so that they can keep their leadership roles in Pakistani society.

There was also a street protest against this March. They called it Haya Match in opposition to the Aurat March. The participants condemned that they are spreading vulgarity and fornication in society especially by the use of social media. They also threw stones on this peaceful March to stop its way. All they are going is garnishing those sufferings on the part of women in this country. According to the latest Pakistan Demographic and Health Survey estimation, 28 percent of women in Pakistan have “experienced physical violence” by the age of 50.

There is no doubt in it that Pakistan is an Islamic state made in the name of Allah to implement the Islamic Shari’ah Law in the country. But there are some of the intellectual considerations to whom if we will not consider then we are going to have a more horrible future even. The world is changing at a pace and our problems are different than those of the people who resided in this land thousands of years before. Our religion has assigned our ruling. All we need to do is to interpret it in a way so that we can make Quran timeless. Constricting it to a particular interpretation is itself questioning its authority in every ear. They do not understand the fact that by those actions they themselves are harming their religion.

We had a detailed discussion about the different eras of the feminist movement in Pakistan. There was a detailed discussion on its background. Today there is the fourth wave of feminism which is air in Pakistan. It is aimed at asking for equal rights for women. But it has faced a lot of criticism and backlash from the religious community especially from the Taliban group in Pakistan. They accused the movement of blasphemy and threw stones at them so that they can stop its spread at any cost. All they need to consider is that they are harming their own religion by themselves with the promotion of conservative Islam which is not going to work at this time.

The role of human rights and humanitarian actors to control gender-based violence:
Omicron: The New Variant, and here’s what we know about it
To Top