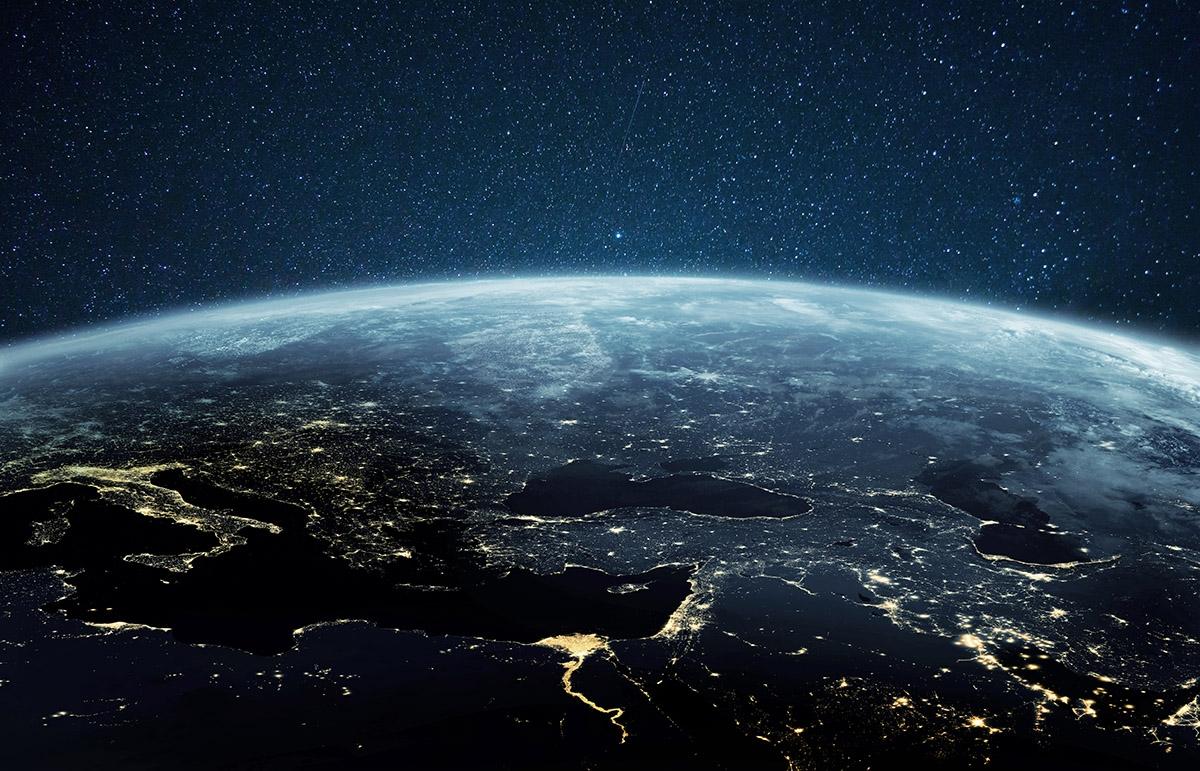 Earth is our home planet. With a radius of 3,959 miles, Earth is the fifth largest planet in our solar system. Planet earth’s official scientific name is “Terra”. It is at the right distance from the sun and is protected from the harmful radiation from the sun by its Ozone layer and magnetic field. It also includes the right chemical ingredients for life. Millions of species live here. Earth is known as the home of mankind because of its suitable environment for life such as suitable temperature and water which helps other organisms to reproduce and thrive. There are many planets in our solar system other than earth which include Jupiter, Saturn, Mercury, Venus, Mars, Uranus, Neptune, and Pluto. Unfortunately, only earth lies in the habitable zone of our solar system, which means that earth is at the right distance from the sun to have a suitable temperature and environment to support life. All other planets like Mars and Jupiter are not at a suitable distance from the sun, these planets are either too far or too close to the sun. Recently, many planets from other solar systems have been discovered that can support life and there are lots of chances of the existence of life on these exoplanets. An exoplanet is a planet outside of our solar system, which means exoplanets have their own stars. Here is the list of the top 10 exoplanets.

This exoplanet was discovered in 2015 and is located 470 light-years away. Kepler 438b was deemed one of the most Earth-like planets ever discovered due to its earth similarity index or ESI which is 88% similar to earth hence making it a suitable candidate for the potential of life. Kepler 438b is only 12% larger and receives 40% more light compared to the earth but it’s still missing some necessary qualities for habitation such as it does not have a proper atmosphere and the planets nearby star emit flares 10 times more powerful than our sun. This planet might be the second option if it has a magnetic field like our planet.

This planet was first discovered in July 2015 which is an exoplanet and is also known as Super-Earth. Moreover, Kepler 452b is around five-time the mass of earth. It completes a full orbit in 385 days but due to its large size, it also has twice the gravity compared to earth and receives more sun energy making it hotter than earth but still it’s a good candidate for hosting life. If we were able to reach Kepler 452b unfortunately the planet is 45,000 light-years away which means if we travel in a spaceship at a speed of 37,000 miles per hour then 26 million years are needed to get there. In that condition, cryogenic preservation and age-reversing agents will be mandatory.

Proxima B is 4.2 light-years away from the earth and was first discovered in August 2016. It orbits the habitable zone of a red dwarf star named Proxima Centauri and has the potential for survivable living conditions due to the presence of water. This exoplanet is 30% bigger than the earth and its one year is equal to 11 days. It has an earth similarities index of 0.87, still, it has some significant downsides such as it receives only 2%of light from its nearby sun and there are violent stellar winds that are 2,000 times stronger than those on earth.

It is an exoplanet discovered by the Kepler space observatory in April 2014. This rocky planet orbits near the outer rim of its sun’s habitable zone and are nearly ten percent bigger than the earth and almost has a similar radius but it is 500 light-years away from us. It is one year consists of a total of 130 days having an earth similarity index of 0.61. It receives only 33% of sunlight compared to earth which means that its brightest day will be similar to evening time on earth. Kepler 186f rotates much more slowly than Earth. So, its day could be weeks or months long. Kepler 186f may be tidally locked which means one side of the planet is always facing its star and the other is in constant darkness. The gravity on Kepler 186f could be very similar to earth’s and there is some possibility that it has an atmosphere that can help keep the water in liquid form that’s why scientists have described Kepler 186f as a cousin to earth.

This planet is also known as Super-Earth and was discovered in April 2013. Kepler 62F is situated in the habitable zone of a seven billion years old star. This planet has an earth’s similarity index of 0.67 and is 1.4 times earth. This exoplanet is an earth-like Water-world that contains oceans and seas. This planet is an excellent candidate for alien life and feasible for hosting human life. Kepler 62F takes 267 days to complete a full orbit around its sun and receives 41% of the sunlight compared to the earth. However, the planet might be tidally locked in orbit. So, humans can only survive at the border between light and dark areas where the temperature is suitable to support life.

This planet is Mars’s cousin and you can see all of the suns. In fact, it’s a part of a 3-star system that is 23.62 light-years away from us. It is 3.8 times the size of Earth has a rocky surface and it has 85% similarity to earth. It’s on the slightly hot edge of the habitable zone with a temperature ranging in 254.3 Kelvin. It receives 90% of the light of its sun.

It’s 1.6 times larger than Earth has a rocky surface with a high probability of water and may be covered with oceans. It’s one year is 122 days long and 1,200 light-years away from us. This planet is also known as Super-Earth.

This planet is also called Zarmina which is 20 light-years away from earth discovered by astronomer Steve invoked in 2010. It’s one year lasts for 67 days but unfortunately, this planet is tidally locked with its sun. If a strong atmosphere exists on the planet, it could circulate the heat from the sunny side over the dark side making it much more habitable. Hence, it is possible for the water to exist there with at least one ocean. Gliese 581B is 1.5 times the size of Earth having a temperature between negative 35 and 10 degrees Fahrenheit due to the weaker energy output from its small sun. All these features increase the chances of life on this planet up to 100% which is an extremely optimistic presumption.

This exoplanet orbits in the inner edge of the sun’s habitable zone which is 600 light-years away from us and was discovered in December 2011. Kepler 22B is twice the size of the earth and has a year of 290 days. With a temperature of approximately negative 11 degrees Celsius in the worst case while 22 degrees Celsius in the best case so it is reasonable for humanity to survive.

This is an earth-sized exoplanet orbiting in the habitable zone of a Red dwarf star. It is located about 301 light-years away from us. Due to the presence of water and suitable temperature, this exoplanet is also considered suitable for human life.

What are the Requirements for Microbial Growth?
An Overview Of Microbial Culturing Techniques
To Top