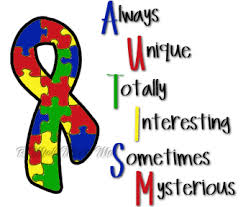 Autism is not a disability it’s a different ability

Autism spectrum disorder is a pervasive developmental disorder. This means apparently it happened in early childhood and affects all the aspects of a child’s development. The word Autism was firstly used as a diagnosis in 1943, by a doctor of Maryland’s Johns Hopkins Hospital, Dr. Leo Kanner. He studied 11 children and diagnosed them to have infantile Autism. The word Autism is drive from a Greek work Autos which means “Self” So, autism literally means “Alone”.

According to the data of Centre of disease control, 1 in 59 children is estimated to have been diagnosed with autism spectrum disorder. Boys are three to four time more likely to diagnose with Autism Spectrum Disorder then the girls. Moreover, mostly girls with autism show less obvious signs of disorder as compare to boys. Autism spectrum disorder affects all creeds, all nationalities, all races, all religions, and both sexes. It does not differentiate or affect only one group or another.

What is Autism Spectrum Disorder?

Autism spectrum disorder is a fastest growing complex developmental condition. This involves persistent challenges in speech, nonverbal communication, social interactions and repetitive as well as restricted behaviors. This is a developmental disability and diagnosed usually in childhood first and exhibits many of the most obvious signs of disorder. It generally appears around the age of 2-3 years but in some cases children with this disorder develop normality until toddlerhood and then stop acquiring new skills and loss previously gained skills.

To get the early help that an autistic child needs at proper time it is important that their parents have understanding about the symptoms of this disorder. Some clear signs now have been identified that help parents to recognize the symptoms and characteristics of Autism and other possible developmental challenges in their own children.

Children or Adults with Autism might have Following Signs:

People diagnosed with Autism spectrum disorder often have problems with emotional, social, and communicational skills. They repeat certain behaviors and might not want any changes in their daily activities. Many children with Autism also have different ways of learning things, paying attention, as well as reacting to environment. The symptoms of Autism spectrum disorder is divided into two categories according to DSM-Ⅴ.

Restricted and repetitive patterns of behaviors, interests or activities:

These symptoms must be present in the early developmental period of a child’s life and cause clinically significant impairment in occupational, social, and other important areas of current functioning.

Diagnosing Autism spectrum disorder can be difficult because there is no any medical test, such as a blood test, genetic, chemical or neurological test to diagnose the disorders. A diagnosis of autism is still made on the basis of behavioral observation. Doctors and professionals looked at the child’s behavior and development to make a diagnosis. Sometimes Autism spectrum disorder can be detected at 18 months or younger. At the age of two, a diagnosis by an experienced professional can be considered very reliable. However, many children do not receive a final diagnosis until they get much older. This delay means that children with Autism might not get the early help they need.

Planning For Their Future: Tips For Parents

Children with Autism spectrum disorder not only characterized as their challenging behaviors but they also get attention due to their positive characteristics and skills. People with Autism typically continue to learn things and compensate for problems throughout their life, but most of them also will continue to require some level of support. Parents should determine what their Autistic child good at will help to provide their child a sense of achievement. You can blend you child’s positive abilities into their daily activities. When your child practices their skills he/she will get the satisfaction and joy to learn more. When they practice their skills more and build upon their strengths, they will become more successful and happier in their upcoming life.

These strengths and abilities may be the points they will determine what they will be taking up as a job in their future. Determining the positive characteristics and abilities of your Autistic Child and working on the challenges can greatly improve both your and your child’s life in general. Planning for your Autistic child’s future opportunities, such as college, employment, living situation, independence and the services required for support can make this process smoother.

Treating Schizophrenia: Causes
Which personality disorder is most difficult to cure?
To Top