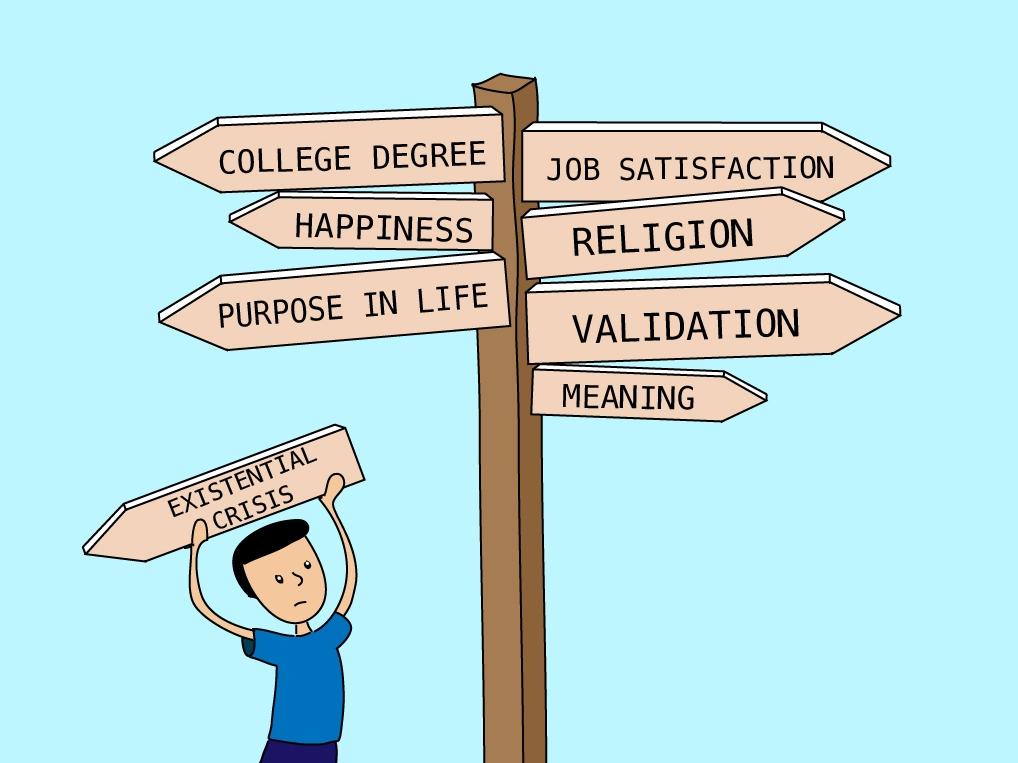 Have you ever considered yourself in any spiritual crisis? An existential crisis can happen to anyone and at any time, but it’s always good to be prepared. This article will explain what an existential crisis is, how to recognize one, and how to deal with them in order to avoid feeling like you’re living in a constant state of despair or confusion. Even if you haven’t experienced one before, it’s helpful to be aware of what is an existential crisis. Consequently, you can recognize if and when one may be coming your way.

Existential crisis refers to a state of extreme anxiety or insecurity that occurs when one questions whether or not their existence has meaning. It’s a dilemma that stems from living in a world where humans are free to pursue any goal they set out for themselves but must face uncertainty as a result.The term was coined by Victor Frankl in his 1946 book Man’s Search for Meaning and describes how many are left feeling lost when they realize that their job doesn’t fill them with purpose and meaning.

The philosopher, Dr. Albert Camus, defined existential crisis as a moment of profound anguish and the desperate yearning for meaning. It’s a point where you’re seriously questioning your core values, beliefs, life direction, and purpose. The emotions involved are overwhelming and you might even feel depressed. It can seem impossible to gain any real perspective or clarity on what matters most to you.

This isn’t just your typical mid-life crisis that affects people around age 40. But by some estimates, around one-third of people will experience some kind of existential crisis during their lifetime. And those experiencing one may feel particularly isolated because very few friends or family members will be able to relate; not all personalities can relate to someone else’s philosophy on life after all!

Let’s talk about it

An existential crisis is a psychological reaction to stress and anxiety that typically develops in early adulthood. It’s characterized by feelings of profound confusion, lack of meaning, and alienation from one’s surroundings, accompanied by various physical and mental disturbances. In most cases, it lasts only several weeks or months before subsiding. Although in extreme cases it can last much longer—and sometimes lead to a long-term breakdown or even suicide.

Like other forms of depression and anxiety, there are many different types of existential crises but one thing they all have in common is that they result from some sort of loss or trauma—of identity, career prospects, friends, family relationships.

According to Chödrön, an existential crisis can come about as a result of many things. The most common example is as a response to a traumatic experience or big life event such as divorce, death of someone close, serious illness or injury, loss of job or money, going to prison. However, people can also experience them because they are suffering from a mental health disorder or even if they are just bored with their life. You may be experiencing one if you feel like your life has lost its meaning and purpose or that you’re questioning whether it has any value at all.

There are three basic components of existential crisis.

Emotions include feelings of despair and depression, and often involve a loss of purpose in life. Cognition refers to beliefs about oneself, society, death, and meaninglessness.

Behaviorally, there may be increased use of alcohol or drugs, while some individuals turn to sex or gambling. Suicidal ideation might occur as well. Though these crises can arise from stressors in childhood or past trauma, they can happen at any time and often for no identifiable reason. There’s no concrete definition for what constitutes an existential crisis; sometimes people define it as when their values clash with societal values or their own sense of self becomes conflicted.

The causes of an existential crisis:

Anyone can go through a period of feeling lost or confused. It is often when you face a huge change in your life that those feelings can become overwhelming. The trauma could be something as big as losing your job, moving country, or experiencing a major illness. It might be something less obvious, like being unable to take part in activities you love because of time restraints or getting into arguments with loved ones about what’s most important to them.

All these kinds of situations can make you question where you are in life and why you’re here – what makes your life worth living? Where do you fit into the world around you and why should anyone care about who you are and what makes you different from everyone else?

How to deal with it:

A person’s beliefs can change with age and/or life experiences, causing confusion and worry about their existence and purpose. If you’re going through an existential crisis, take time to meditate or pray about your questions. Then write it whatever comes to mind; writing will help you focus your thoughts better than trying to simply think about them alone. If possible, share your concerns with a close friend or family member; having someone there to listen and encourage you will make it easier for you to put those feelings into words on paper.

Some might dismiss anxiety as just a harmless part of everyday life, but when it’s all-consuming, it can be very serious. We take a look at one specific kind of anxiety disorder: obsessive-compulsive disorder (OCD). People with OCD have uncontrollable thoughts, known as obsessions, that make them feel driven to perform ritualistic behaviors or compulsions. These mental health conditions are often misunderstood and many people aren’t even aware they exist. More than 2 million adults in America will experience symptoms at some point in their lives.

Because most of us are not trained to deal with stress at a professional level, many people who experience existential crises turn to medical professionals for help. Since we tend to be very good at treating physical ailments, it only makes sense that we might approach psychological issues in a similar way.

Most often, these issues are diagnosed and treated as disorders—like anxiety or depression—but one could argue that they actually have less to do with illness than lifestyle choices. If you’re having trouble coping with stressful situations or even normal everyday tasks, you may have a particularly difficult time and may benefit from some kind of therapy or counseling (or both). It can be hard going it alone when times get tough, and often times seeking help for your situation can make all the difference.

An existential crisis is one of life’s most difficult experiences. A person finds him or herself unable to find meaning in life, which results in feelings of isolation and despair. Without a sense of purpose, life feels empty and without hope for any form of change. If you’re experiencing related symptoms, you should consider professional help. Often people suffering from suicidal thoughts are victims of severe depression and anxiety disorders (sometimes misdiagnosed as bipolar disorder) that require prescription medication and therapy sessions with a trained therapist.

Benefits of  Writing
How To Write A Short Story?
To Top