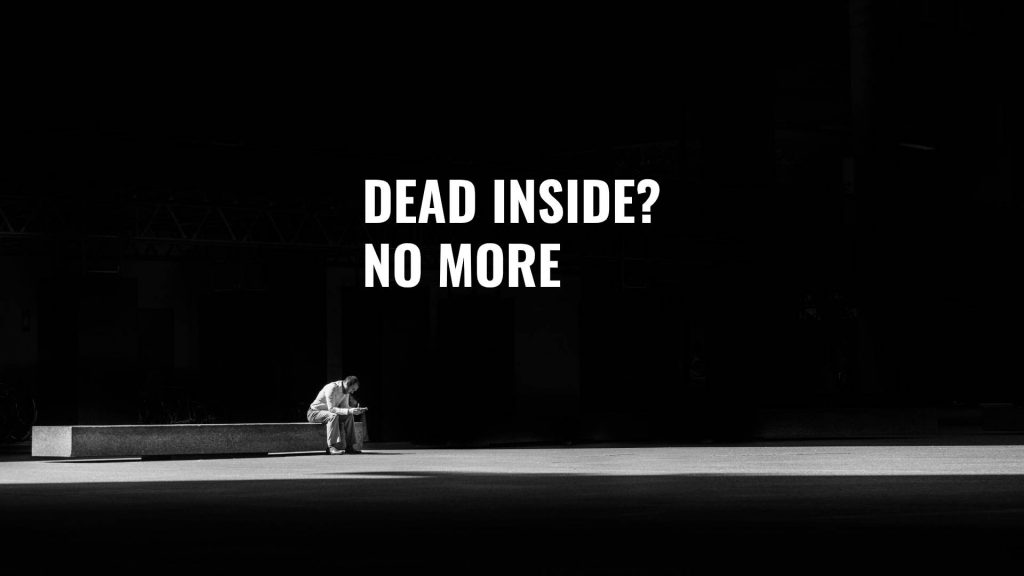 When people tolerate multiple emotional shocks, they might become “dead inside”. “Dead inside” basically means when you don’t feel any good emotions like sympathy, empathy, love, joy, happiness and all that good stuff.

We as a human are bound by pleasures and rewards. Rewards in terms of Food, health, Trust, social appraisal and love. Also, when we try to something, we try to get reward out of it.

When a person has been hurt severely in terms of daily security (may be money and survival) and also socially and may be love. They feel very numb and sad.

When they don’t have friends, a girlfriend/boyfriend, supportive families, nor anyone they can vent their problems to, when all they get is random people yelling at them whenever they have a problem, nobody loves because they got no family. They haven’t got laid in forever, they don’t have a significant other they can cry or hug when they are down to make themselves feel better, overtime through lack of any form of affection, from 6 months to five years.

Their spirit starts to almost deteriorate as they break down, they cannot laugh at things, nothing is fun anymore, they given up completely on venting about things figuring it is futile because nobody is listening anyway or they get yelled at by angry people otherwise, they cannot cry, they figure what is the point in being angry, then they blank out for a few days, try to reach out to any grasp of hope one last time, and then right there, they die inside.

Then there are people that are born like psychopath with no sense of empathy or relating to others where nothing affects them.

Reasons of being dead inside:

Now I am going to explain you the real reason. When the person has suffered severely mentally and physically but the person is already aware of it and the consequences and he/she wants to change the reality but they can’t. Their situation doesn’t allow them to do it may be because they are stuck at the most basic needs like food and shelter let alone other things.

Let’s accept they have all the basic needs. So, the problem could be trust and social withdrawal where they can’t get desirable outcome from people and fail repeatedly. The brain no longer efforts to tie and trust anybody. It withdraws social connection because it is vulnerable and sees everybody as selfish and enemies. To protect themselves, they isolate themselves. But this is the worst thing one could do. We cannot survive alone in this world, we need people because we are social animals.

The situation goes worst for some people who have lived happily. They fall in life sometimes very hardly like losing partner, losing money, friends, parents everything together, this is the worst stage of insecurity and fear one could ever bear.

People that are victims of crimes, people that are depressed, or people engaging in abusive relationships where they are stripped from everything inside as love, pride, self-confidence and worth. And it could be due to a chemical imbalance where they can become isolated more and more and become more an more dead inside.

It is like Being in the middle of the ocean all alone and floating there. You cannot do anything about it. You just let it be. you accept the death. For this reason some people also try to suicide.

Examples of people becoming dead inside:

Some examples when people become “dead inside” is when all your friends don’t want to hang out with you, when you are constantly persecuted, when someone close to you (family or best friend) dies or leaves. Of course, if any (or all of them, which will make me have eternal respect for you as a person, being able to cope with all those things) of these things happened to you, you will not become suddenly “dead inside”. There are multiple outcomes.

Being dead inside, is, from person to person, awesome or awful. It might be awesome if you become very antisocial and begin to hate all of humanity, and it might be awful if you want to have friends to talk to, to hang out with.

Persons that are “dead inside” often have a blank stare, they rarely if at all smile, they are very truthful and often they don’t care about people’s emotions or they don’t realize that what they are saying is hurting someone’s feelings.

Psychology behind dead inside:

Being “dead inside” is not a good thing and it’s usually associated with depression. Don’t try to be nervous by saying “I’m dead inside” or things like that. This emotional state is a serious problem and it may be very dangerous.

It’s a shady range of psychology, discovering death’s grasp on a person who feels entirely beaten by life.

Its clinically called “Psychogenic death”. And this death is real. “It is not suicide, but the performance of giving up on lifetime and vanishing usually within days, is a very real state regularly linked to severe trauma.”

Of course, recovery is possible. Death isn’t predictable. Common interferences include physical activity or introducing a person to a situation that they identify as one they can truly control. . That understanding can release censoriously important dopamine into the brain, which carries them back to a state of life they previously experienced.

Life is a Baseball game. Play the game. You don’t want to sit on the bench. Don’t expect a home run every time you step up to the plate. Little hits add up. Swing the bat. Don’t stand there and strike out just looking. You will strike out sometimes. It is all part of the game. You will get hit by a wild pitch every now and then. It’s ok. Pick yourself up and carry on. You will win some. Be humble in your victories. You will lose some. Be graceful in your losses. Enjoy the game. Enjoy what you are doing. You may never make the world series.

You may not even make the Majors. You may end up playing on some minor league farm teams. Enjoy the game. If you are not enjoying the game then it will not matter if you win the world series. You will still be miserable. If you enjoy the game, it will not matter if you play for a minor league farm team, you will still enjoy playing. When you get older, teach young people how to play the game. “Dead inside” would be the person who never plays the game.

Now next steps are very fundamental for your life till you die.