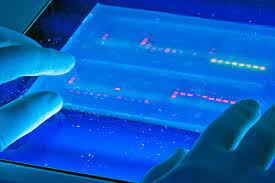 A DNA ladder, basically, consists of a solution of the molecules of DNA with varied lengths used in agarose or acrylamide gel electrophoresis.

In this process, ladder of DNA is used as a control to determine the size of unknown DNA molecules that were differentiated on the basis of their mobility in an electrical field through the gel.

Take 0.6 g agarose powder in a beaker and add 50 mL TAE buffer in it. In order to mix it thoroughly, beaker is heated in an oven for 1 minute and 4 microliter ethidium bromide is added. Then the gel is poured in caster and left at room temperature for about 15 minutes to become hard. Now, carefully remove the comb to secure the wells.

It is added in an amount of 3 microliter using pipette into well. This would act as reference for the determination of query DNA fragment size. On the other sides, DNA samples of at least 3 microliter with same amount of bromophenol blue are poured in the wells.

Ladder is a control and a tool with which we can measure the weight of macromolecules like DNA or RNA in gel electrophoresis. DNA ladder, also known as molecular-weight size markers, helps to distinguish different DNA fragments on the basis of their molecular weight, which in turn differentiates them in terms of size. The best property of DNA ladder is that it can stain well with nuclear stains like ethidium bromide, which in turn results in the visualization of DNA fragments after gel electrophoresis.

DNA ladder has been used in several DNA related experiments such as, the distinction between DNA variants and quantification of the number of mutations in a DNA fragment molecule.

Commercially available DNA ladders come in the 1 kb, 1 kb plus, 100 bp, and 500 bp form. Basically, digestion of known-length of the DNA fragments by the restriction enzymes (from natural sources) are involved in the formation of these ladders.

It contains 13 linear double stranded molecules of DNA fragments which can be applied to determine size of the DNA fragments with 250 base pairs to 10,000 base pairs. These can be used on agarose or PAGE (Polyacrylamide gel electrophoresis) with 0.75% to 1% gel. Recommended loading amount is 5 microliter. They have bromophenol blue. So, there is no need to add dye again.

This kind of DNA ladder consists of DNA fragments ranging from 0.5 kb to 10 kb, with 14 individual chromatography purified fragments reference bands at 1000 and 3000 base pairs

It is used for the quantification of double stranded DNA of size 100 bp to 150 bp. It may consist of 11 highly purified fragments. Some of them can be radio labeled. This ladder can be visualized on 1-2% agarose gel after staining.

This type of ladder consists of 10 DNA fragments ranging from 500 bp to 5 kb and is supplied in ready to use format containing blue tracking dye. It allows sizing and concentration estimates of fragments on agarose. 5 microliter amount is enough to be loaded on 1.2 % agarose gel.

Formulation of the all the chemicals used including buffers and dyes are described below. These recipes strongly recommend autoclaving of the reagent prepared.

Loading dye is typically made of 6X concentration containing:

A large number of applications, both in academic and clinical sectors, make agarose gel electrophoresis an extremely valuable technique. Even though, the current advent of upcoming generation sequencing technicalities has the capability to replace many of the recent applications of agarose gels, their ease to handle and usage and, of course, versatility mean that this procedure is more likely to persist for the foreseeable future in a long run.

Some major applications of agarose gel electrophoresis are described below:

How DNA is Separated Using Agarose Gel Electrophoresis?
What causes earthquakes?
To Top