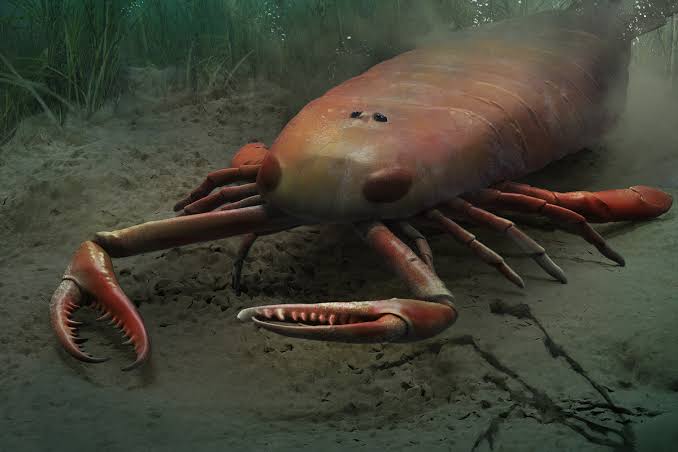 When we think of prehistoric times we think of the dinosaurs. But there was a whole world of creatures exploring the planet before them and honestly, some of them were freaky feels like a real understatement. There are many freaky creatures of the past that are now extinct. All these creatures existed before dinosaurs. From a scientifically described Gorgon face to the oldest animal ever discovered on Earth . Here is the list of the most freaky creatures that lived before dinosaurs. Read about the origin of life on earth

It is the animal kingdom’s oldest and possibly strangest known member. Over 600 million years ago, this creature was quietly developing far beneath the ocean surface. With no notable predators, it was able to evolve without the need for protective skin or even skeletons leaving them with an unusual oval-like ribbed squishy body that looks nothing like any other animal alive today.

This animal is one of the earliest complex life forms ever to exist on our planet.

If the unpronounceable name makes it too hard to comprehend, just think of this as a fish with a backbone. While the Cambrian period is probably best known for the sudden influx of unusual non-vertebrate creatures. This creature was one of the first to reverse that trend. There is a lot of debate whether or not this animal is considered to be a prehistoric fish

Evolution is truly a friend to those that are forced to endure the suffering of bullying. Take, for instance, the Astraspis, which evolved from a helpless target into a much stronger and more resilient creature, although it took a few thousand years. Astraspis was a unique creature in its time and it survived mostly from the nutrients and algae which made it like all non-carnivores a promising prey. It is probably accurate to estimate that the Astraspis was eaten by just about every predator alive during the Devonian period. Eventually, the creature had preyed on so often that it evolved to develop a new tougher head and body armor that would protect it against cunning predators like sharks. Unfortunately, this new armor also made the Astraspis gain significant weight which did not really help protect it against predators

This is an ancient millipede. But it actually has a much bigger historical significance. This species at present is the oldest known creature to ever have lived on land. The creature was discovered in 2004 thanks to the fossils located in Scotland. Its actual age is pretty hazy. It lived some 428 million years ago. Studies have suggested that it actually lived much earlier existing sometime in the early Devonian period. So, we may never know for sure.

For those of us that are not huge fans of millipedes or centipedes or pretty much any small creature with more than four legs, this is a pretty horrifying thing to look at. It predates the centipedes by around 10 million years and predates land vertebrates by 50 million years.

It is common knowledge that reptiles like crocodiles and alligators are some of the last living descendants of dinosaurs on the earth. But this unusual species is actually distinctly to lizards and snakes. This means they too could be considered descendants of dinosaurs. The Nothosaurus lived some time in the Triassic period around 200 and 250 million years ago. It is immediately recognizable by its 4-meter long slender body and long extended features. This was a species that felt very comfortable in the water and lived a lifestyle that was probably comparable to what we now see with seals.

What makes this creature particularly intimidating is its way of hunting. While it could just grab and eat fish or other marine mammals that had happened to come across Nothosaurus was particularly well known for its ability to dig up hidden creatures lurking beneath the seabed. Once those creatures were chomped up by the Nothosaurus, there was no escape. While this has not been confirmed by many experts, it is likely that the Nothosaurus is a distant relative or early ancestor of our modern lizards.

No two creatures are alike. Some are more slender, some are bulkier and some are just giant. In the case of Scutosaurus, it is probably one of the biggest prehistoric creatures we have ever had on our planet. The Scutosaurus was discovered by experts in 1920s Russia and was named accordingly with its translated English name being shield lizard. That name is not unearned. The Scutosaurus was a 6 feet long one thousand pound thing with thick bones, bulky muscles, and a lot of armor plating. All that plating meant that this animal was pretty well defended against potential predators.

Even if it did make the creature significantly slower but what is most fascinating about Scutosaurus is that they were basically prehistoric buffalo roaming the floodplains of Eurasia some 250 million years ago. Just as cows and buffalos travel in packs today, the Scutosaurus did back then. The Scutosaurus was a herbivorous creature but it is definitely a scary one. While humans were obviously not around at the time, this would likely behave in the same way an elephant rhino would.

This is the largest known species of Dimetrodon at 4 meters long. A most notable feature of Dimetrodon Angelensis is that fascinating snail on their back. Experts still do not know what that was actually for. The most likely theories that it was used intimidate rivals or attract mates, not unlike some modern birds.

Some scientists believe that the snail was designed to regulate the body temperature of the creature. Dimetrodon Angelensis was one of the earliest meat-eating predators on our planet and likely posed a significant threat to just about any creature it came across.

This is the largest discovered monster anthropod and existed 400 million years ago and is an ancient ancestor to our modern sea scorpion. But when experts from the University of Bristol discovered a whopping 46-centimeter claw from one of these creatures, they began to realize that it was a gigantic creature. These scorpions were actually incredible predators before the age of the dinosaur. They were especially gifted at hunting. While many predators have no patience and dive on whatever they get, the Jaekelopterus was very patient.