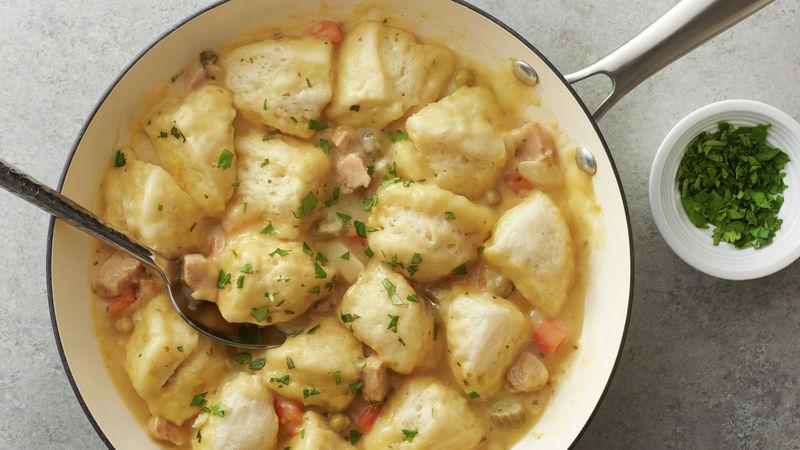 Creamy Chicken and Dumplings is the ultimate comfort dish. Warming flavors abound in this thick, creamy chicken soup. And it is topped with deliciously cooked, light, and airy dumplings. However, this dish is prepared from scratch and employs ways to ensure the most delicious chicken possible. In this article, we will share an easy chicken and dumplings recipe with minimal effort.

But first of all, let’s talk about what is Chicken and Dumplings?

A flavorful chicken soup with vegetables in a creamy sauce is the foundation for Chicken & Dumplings. The soup is garnished with uncooked dumplings, which are later steamed. However, it is one of the favorite comfort foods in the South. The thickness of the soup and the type of dumplings used can differ.

What type of dumplings do you have?

Drop dumplings are dumplings that are produced in a bowl and then dropped into the soup to be cooked. They’re fluffy and airy.

When you order Cracker Barrel’s Chicken and Dumplings, you will be served rolled dumplings. They are dense, flat dumplings.

Canned biscuits are split into quarters and put into the soup to make biscuit dumplings.

So let’s see how to make chicken and dumplings?

Creating the dumplings is the first step in making chicken and dumplings soup. However, this recipe for handmade dumplings is incredibly simple. They only take 5 minutes and a few things that you most likely already have on hand.

Some dishes are best when kept simple to allow the flavors to show through, and Chicken and Dumplings are definitely one of them.

The best chicken and dumplings recipe

The key to making the creamiest dumpling is to use evaporated milk. When compared to whole milk, evaporated milk is creamier. However, it is not as thick as heavy whipping cream and thus far less fatty.

Procedure for cooking chicken and dumplings

Melt the butter in a large pot over medium-high heat. Combine the onion, carrots, and celery in a large mixing bowl. Cook for 5 minutes, or until the vegetables have started to wilt. Cook for a further minute after adding the garlic.

a quarter teaspoon of kosher salt

¾ of a cup of buttermilk

Ingredients for the chicken:

Preparation for the easy chicken and dumplings:

Season both sides of the chicken with salt and pepper. In a large Dutch oven, heat the oil over medium-high heat. Sear chicken, skin-side down until it turns thoroughly golden brown for 8 to 10 minutes. If necessary, work in batches. Cook for another 5 to 8 minutes until the chicken is browned on the opposite side. Pour all of the fat from the chicken into a measuring cup and place it on a large dish. However, depending on the fattiness of the chicken, you will need roughly 5 tablespoons.

Leave 2 tablespoons of grease in the pot, retaining all the browned bits in place. In a large mixing bowl, combine the onions, celery, and half of the carrots.. However, season with salt and pepper and simmer on medium heat. Keep stirring constantly to scrape up all of the parts stuck to the bottom of the saucepan. Cook for about 4 minutes until the vegetables begin to soften. Return the chicken, thyme, and 8 cups of water to the pot. Cook, uncovered, for 30 to 40 minutes. Until chicken is soft and liquid has reduced by approximately 1/4.

After that, set the chicken aside to cool on a dish or cutting board. Remove the stock from the pot. Although, you should have approximately 5 cups. If you have less, use water to make up the difference) and wipe it out.

Heat the remaining 3 tablespoons chicken fat and 1 tablespoon butter in a medium saucepan over medium heat. However, if you don’t have enough chicken fat, use enough butter to equal 4 tablespoons of fat. Sprinkle in the flour and whisk continuously for 2 to 3 minutes, or until everything is a pale golden color.

Bring to a boil, whisking in the reserved chicken stock until no lumps remain. It will thicken greatly at first. Season with salt and pepper and reduce to low heat to allow the leeks and remaining carrots to cook.

Remove the chicken’s skin and bones and toss them out. After shredding the meat, add it to the pot. Cook, stirring periodically, for 10 to 12 minutes. Until the carrots and leeks are cooked and the liquid has thickened.

To make the dumplings, whisk together flour, baking powder, salt, and pepper in a medium mixing basin. Whisk together buttermilk and egg in a small bowl, then add to dry ingredients, followed by the melted butter. Stir lightly to blend using a wooden spoon or spatula. Do not overmix the ingredients.

Drop big quarter-size dollops of dumpling dough into the pot with a spoon. They should just sit right on top and will not sink. Space them as widely as possible. However, it is fine if they touch. Reduce the heat to low and cover the pot. Cook for 18 to 22 minutes. Until the dumplings are puffed and completely cooked through. To check for undercooked dough pieces, cut a dumpling in half. It should seem somewhat biscuity. Continue to cook if it is not.

Remove the top and divide the mixture among the bowls. You can garnish with parsley and chives too.

Are chicken and dumplings supposed to be thick or soupy?

Traditionally, the texture of chicken and dumplings is thick. However, make soupy and slippery dumplings with simply flour and water for a denser, chewy texture.

What can I add to my chicken and dumplings to make them thicker?

To thicken it, you can use a roux. Cornstarch or arrowroot can be other options.

Can you add flour to chicken and dumplings to thicken them?

Yes, you certainly can. However, dumping dry flour into the pot will cause the clumps to enlarge and gelatinize. Instead, before adding the flour or other thickening agent to the simmering soup, make it thin in a slurry.

How do you make soft dumplings?

Using a small amount of vegetable shortening in the dough can help it stay tender when cooked.

Enjoy your weekend by trying this best chicken and dumplings recipe.

5 Ways To Overcome Procrastination
How To Make Fluffy Pancakes?
To Top