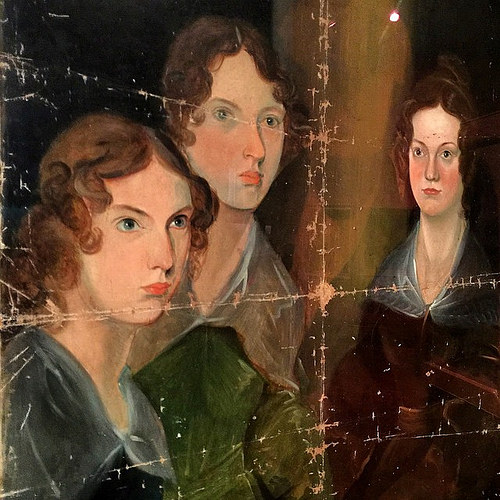 Who hasn’t heard of the Bronte sisters; Anne, Charlotte, and Emily Bronte? There might not be many who haven’t. But who has heard of Acton, Currer, and Ellis Bell? Perhaps not many in our century, when in fact, they are the same. The Bronte sisters were born and lived in the Victorian era when women were not very privileged, and by this I mean they were looked down on. When they decided to publish their work in 1845, they used male pseudonyms instead of their real names to avoid personal publicity and the prejudice which then came against female and feminine writers.

Born to Patrick and Maria Bronte in Thornton, these three sisters had three other siblings, Maria, Elizabeth, and Branwell. After moving to Yorkshire with their father, their mother died and left them in the care of their aunt. Soon after, Elizabeth and Maria died as well, and the other four grew up in isolation. They used to tell stories to each other and made up imaginary worlds such as Gondal, Glass Town, and Angria. Their pastime was creating these stories and writing them down in little books, making detailed charts and maps to explain their empires and kingdoms. Their childhood shows us how literary figures come to be. They’re not trained, academics have close to nothing to do with it, and they do things their own way. They read and discuss, they observe and write, they write even without paper, in their thoughts. They take to the imagination rather than petty toys and they even turn toys into creatures they’re not meant to be. If you haven’t noticed, most of them don’t have smooth lives. Bumpy lives teach empathy and empathy drives writing. According to Harper Lee in To Kill a Mockingbird,

You never really understand a person until you consider things from his point of view… Until you climb inside of his skin and walk around in it.

Who influenced the Bronte sisters?

The Bronte children were also influenced by many writers, poets, and artists; Lord Byron, John Martin, and Walter Scott, to name a few. Their professions influenced them a whole lot. They became school mistresses or governesses at some point in their lives and we find details of their experiences in their novels. Of course, their time as students is reflected as well. All four of them had promising talents, although Branwell died too early to do anything of them and rather wasted his years. He did write Juvenilia when he was a child, several small pieces of prose and poetry published in local newspapers under the pseudonym of Northangerland, and an unfinished novel titled And the Weary are at rest. His sisters wrote and published most of their work before his death in 1848, which was also the year Emily died.

When the sisters first began writing seriously and thought of publishing, their efforts were met with criticism and discouragement. It was thought that women were not fit to write, that it was an ill occupation for them, and that writing was better suited to men. According to Charlotte Bronte:

Averse to personal publicity, we veiled our own names under those of Currer, Ellis, and Acton Bell; the ambiguous choice being dictated by a sort of conscientious scruple at assuming Christian names positively masculine, while we did not like to declare ourselves women, because — without at that time suspecting that our mode of writing and thinking was not what is called ‘feminine’ — we had a vague impression that authoresses are liable to be looked on with prejudice . . .

Quoted from the Norton edition of Wuthering Heights, p. 4

It was hard work to find a publisher willing to accept their work despite the quality for the commercial risk was too great. In 1846, they managed to publish their volume of poetry under the names Acton, Currer, and Ellis Bell. Their poetry is well-received today but that wasn’t the case back then. Initially, only three volumes were sold. 1847 brought better luck for the sisters and Charlotte’s Jane Eyre, Emily’s Wuthering Heights, and Anne’s Agnes Grey were published. These are their most famous books. The novels were met with much critical acclaim. Initial responses to Wuthering heights were often harmful because of the novel’s rawness and dark plot. Agnes Grey was taken in more flattering lights, while Jane Eyre was accepted as a book to go far. All of these are now considered classics and are part of almost every literature course at universities.

Tuberculosis; Fate of the Bronte family

The Bronte family members all died early due to tuberculosis, their father outlived them all, and Branwell was the first to go of those who wrote. He died in September 1848, followed by Emily in December. In 1849, Anne died, and in 1855, Charlotte joined her siblings. Their literary legacy has lived centuries beyond their century and shall continue to do so. Penguin publishers have published a book consisting of the most famous novel of each sister, a pack of three in one which will be a delight for those interested in classical literature. Jane Eyre, Wuthering Heights, and Agnes Grey all in one book are a combination of very different writing styles and themes. This is precisely what highlights the magic of these writers.

What has Brontes taught us?

The Brontes have taught us a lot about writing. The withstanding reputation of their novels shows us what enduring novels look like and how they’re written. They tell us to create clear yet ambiguous, honest yet real characters that can be unpredictable in their predictability. They teach us not to assume a character’s fate, they teach us that women can be their own saviors and heroes as well, they teach us how description and background hold a story together and how writings need authenticity. In Jane Eyre, the protagonist was her own hero. In Wuthering Heights, the characters were pitiably honest and the descriptions raw. These writings were new and authentic. That is why they are alive to date.

What really knocks me out is a book that, when you’re all done reading it, you wish the author that wrote it was a terrific friend of yours and you could call him up on the phone whenever you felt like it. That doesn’t happen much, though.

― J.D. Salinger, The Catcher in the Rye

If I were to agree with Salinger, I’d want to call the Bronte sisters, especially Emily Bronte.

How To Stay away from bugs and insects?
What to keep in mind when you’re choosing a major?
To Top