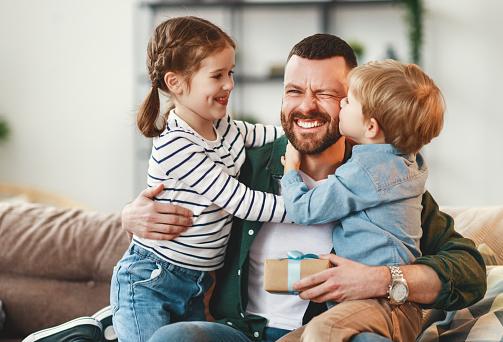 If you’re a father, you wonder how you influence your child. It’s quite obvious that fathers are a major learning source for children. Sure, you laugh with them, read with them, run around the yard, and try to be a good provider. But how much can you influence how healthy, well-developed, and emotionally stable your children are?

Raeburn agreed to share his insights in time for Father’s Day:

We don’t know nearly as much about fathers’ impacts on children as we do about mothers. But as more studies have looked at the effects of fathers on children, one thing is becoming clear: The way fathers spend time with their kids matters.

Once the sperm meets the egg, do you think it’s up to Mom alone to grow a healthy baby? Think again. Fathers’ genes do more than help decide whether a child will be tall or short or have brown or blue eyes. “There’s emerging research that fathers provide genes that regulate a pregnant mom’s blood vessels, allowing more blood flow and nutrients to the developing fetus,” says Raeburn. “The fetus can harvest more food from its mother’s bloodstream by limiting her ability to contract her arteries, enabling more sugar-rich blood to flow to the fetus.”

Research shows that at every age of childhood, fathers influence their kids’ emotional well-being. “In one meta-analysis, Swedish researchers looked at 24 studies of fathers’ involvement with their children and concluded that having an engaged father predicts all kinds of positive outcomes for children,” says Raeburn. “They found that regardless of a child’s socioeconomic environment, sons of engaged fathers had significantly fewer behavior problems, daughters had fewer psychological problems, and both boys and girls showed stronger healthier brain development than fathers who were not engaged.” Research has found, for example, that rough-housing with a dad can teach children how to deal with aggressive impulses, learn self-control, and manage their emotions. Other studies reveal that children who have close relationships with their dads are less likely to experience depression and more likely to have healthy self-esteem.

4. Fathers influence how much their children weigh

Several different studies from Australia highlight the effects that fathers can have on their kids’ weight. One study of 3200 families found that having an overweight or obese father increased the odds of a child becoming obese, even though the children’s moms were a healthy weight. On the other hand, having a normal-weight father, even when the mother was overweight or obese, didn’t increase the child’s risk of obesity. In a recent analysis of the ongoing “Healthy Dads Healthy Kids” study, Australian researchers found that when fathers lost weight through efforts to eat better and exercise more, their children also ate better and were more physically active. The researchers concluded that targeting fathers are a novel but effective approach to improving health behavior in their children.

When it comes to kids’ physical activity, both moms and dads are important, but in different ways. In one study, researchers at the State University of New York at Albany interviewed 180 nine-year-old girls and their parents about their physical activity. They found that only 30 percent of girls reported high physical activity levels. If neither parent provided much support for the activity. This number increased to 56 percent of girls who had one parent who supported their activity and to 70 percent when both parents supported their activity. But they also found that dads took a more hands-on approach in their support. Whereas moms were more likely to support their daughters by enrolling them in activities and cheering from the sidelines, dads were more likely to get out and exercise with their kids, such as by leading everyone in a family activity that involved physical activity. Hiking anyone?