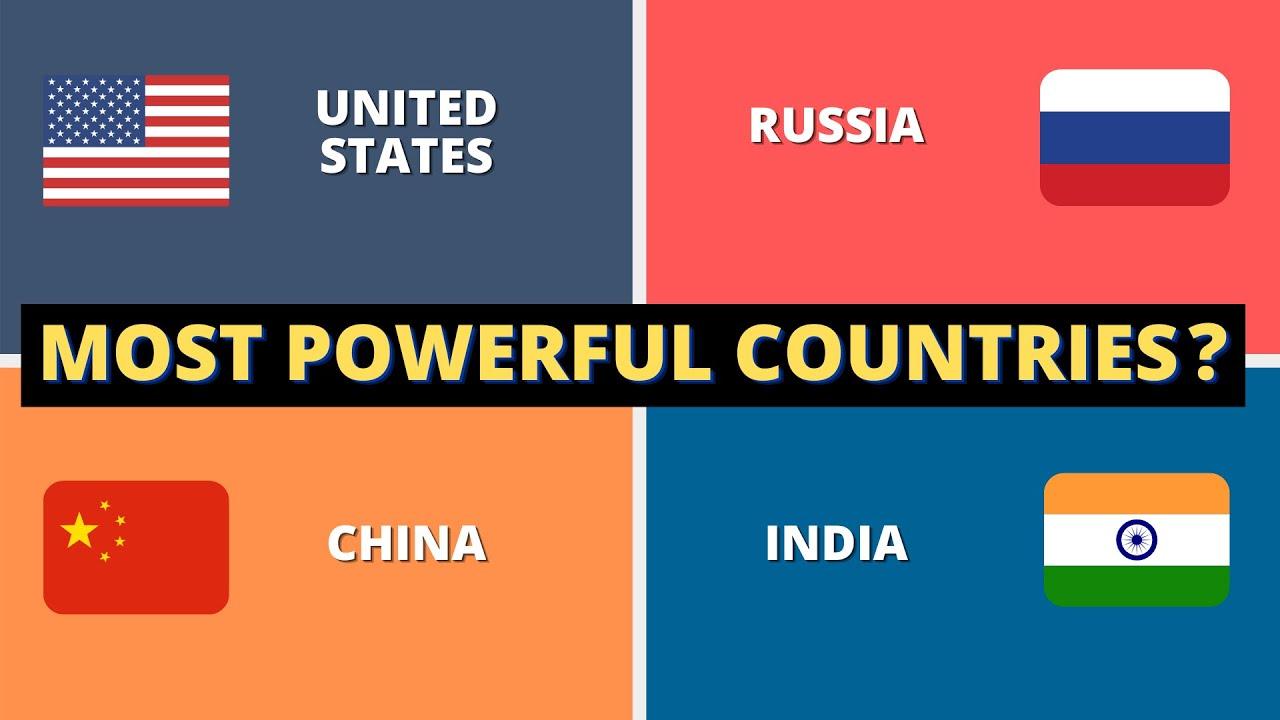 There is a total of 195 countries in the world. 193 are officially accepted while 2 countries are not i-e The Holy See and the state of the philistine. Every country has its own importance. Some are powerful while some are still fighting for their rights. Like in school that brilliant students have a reputation in class while backbenchers are always under the teacher’s radar. Exactly the same in this nuclear era, some countries are ruling the whole world. Because they have more power in terms of money (strong economic position), army, and a nuclear bomb. As you know when a country doesn’t have a strong status it suffers through lots of problems. On the other hand, powerful country rules over-dependent or unstable countries. I am not going on any debate that whether they are doing right or wrong with others. This is a list of the world’s most powerful countries.

These are the 10 most powerful countries in the world.

1) The United States of America

The US holds the most powerful place in the world. It has first of all the strongest economy due to its largest media and entertainment industry. Even more, its city California earns like a mini country. In political terms, the US has an unparalleled position. It always intervenes in international issues. It has Vito power in many cases. Its military is one of the strongest pillars. The US army is the most advanced and powerful. They have the most recent technology in terms of war weapons. consequently, America is always on the number one position.

This is the largest country in terms of area. It covers northern Asia and a large majority of Eastern Europe. It has also a strong economy in terms of natural resources. When it comes to oil and natural gas, Russia has the strongest position in the whole world. Russia also is a permanent member of the United Nations Security Council. Its military is also very strong and well equipped. It almost has 7000 nuclear weapons for warheads. Russia and America have good relations with many other countries, especially with China.

It is the most populated country and it has the strongest economy i-e 2nd largest economy of the world. The way its economy is increasing the reports said that it might be possible that in a few years china leaves America behind. As we all know, china products are circulating in the market everywhere. It is a member of the United Nations and has a very strong political position. It has the largest military and the government has a rigid behavior towards the military. China’s navy has hundreds of commissioned ships and almost over 2, 00,000 personnel. It is also a nuclear weapon holder. It has good relations with other countries as well as with its Asian neighbors.

The UK has a strong economy and political position as well. It is one of those countries which are considering a trendsetter in many fields like technology, fashion, culture, arts, and science. They have a high standard of living and they produced the best doctors in the world. The UK is also a member of the United Nations Security Council and the North Atlantic treaty organization. It has the best intelligence service i-e MI6. It has one of the best navies. The UK is also a nuclear weapon holder.

It is considered one of the most powerful nations. Whenever this country went through rough times or war periods, as a result, they can easily recover because of their strong economy and their highly educated population. Germany always part of the top 10 countries of the world. They have a high standard of living. As they are huge exporters and have a strong global economic influencer. They have a good political position and have good international relations. It is also member of united nation security council as well as North Atlantic treaty organization. Germany always keeps an eye on global security issues. It has some world’s most beautiful cities and has a rich cultural heritage. certainly, they also have a strong military.

France is one of the most powerful nuclear weapon holder i-e around 300. It has the most efficient military. It also has the strongest economy. A fixing member of the United Nations security council. France has the strongest international alliances and always concern about international security and global security issues. It is also called the hub of fashion. Many fashion brands are Chanel, Givenchy, and YSL.

This country is the most influential in terms of technology. They have the most advanced technology than the US. They have a highly educated population which helps in the country’s progress. It has the 3rd largest economy and just behind the US and China. Japan is the largest export of products regarding technology. Member of the United Nations and has good terms with superpowers. Also, maintain perfect relations with neighbors that is China and North Korea. They don’t have the strongest military but they have numbers and a large budget for it. And it is not compulsory to have the strongest military; the strongest nation is also a plus point.

Israel is the most powerful country and as the same as Japan, they have a huge advantage of advanced technology. They have good terms on both sides of the world whether with superpowers or withy other countries. They have the most educated population. They are not supposed to have the largest military-like US and china but Israel definitely has a well-designed and well-equipped military. It also has a nuclear power holder. And Israel has the best intelligence that is Mossad.

Saudi Arabia is a 1st most powerful Arab country. noteworthy, it also shows positive behavior towards foreigners and has good relations with the US and UK. meanwhile, people of those countries are allowed to come and work in their country. Similarly, they have good relations with some Islamic countries like Pakistan. therefore as compared to UAE, Saudi Arabia has a rigid culture but recently they did some amendments like a woman now allowed to drive.even more they also have a large military and huge expenditures.

It is composed of seven emirates that are Abu Dhabi, Ajman, Dubai, Fujairah, Ras al-Khaimah, Sharjah, and Umm al-Quwain. Therefore, Abu Dhabi and Dubai are even better developed and designed according to the foreigner’s attraction. They have probably a more relaxed environment as compared to Saudi Arabia because many other country’s favorite destinations are Dubai.evenmore they have oil and natural gas resources. probably that is why and also because of foreign investment it is the wealthiest country. Furthermore, it is a member of a united nation and also a part of the gulf cooperation council. They have good international relations. They don’t have the biggest military, on the other hand, they are well equipped and imagine when seven emirates will act together they have the power to fight and survive.

These are the topmost powerful and influential countries. It is not compulsory that the list always remains the same and never changed. It might be changed with time. May be some countries replace other countries? However, as per reports, the top 5 order seems difficult to change. hence it seems like they will always rule over the world until and unless some country didn’t hit a high jump.