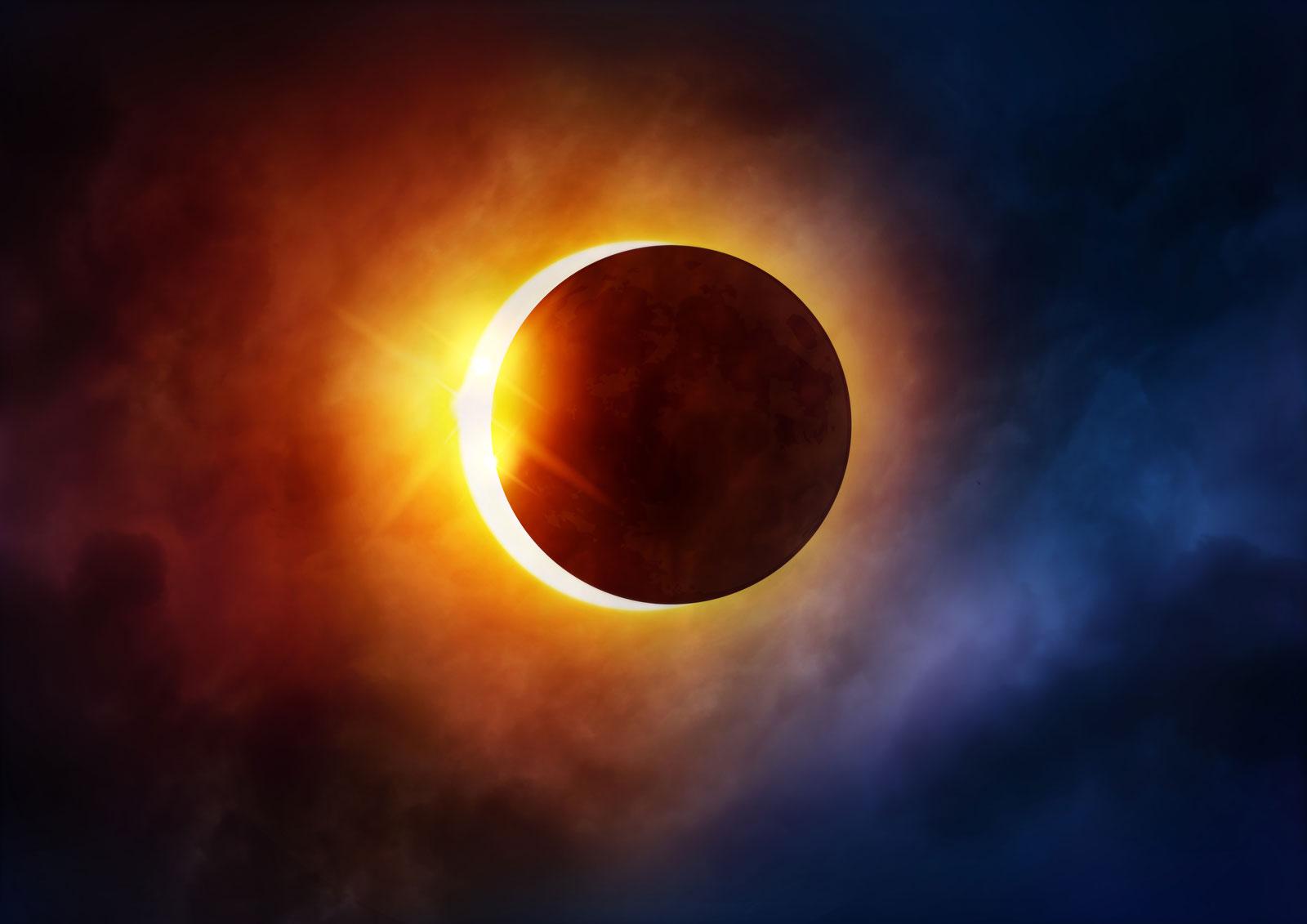 Just imagine you are busy with your daily home chores, in hurry because of getting late for university, or planning for a picnic party next week. Suddenly, the bright glowing day turns into a dark scene. Your room window which is a source of taking solar radiation inside now presents a horrible view. Will it scare you or you will be fine because you know the insights behind it? Maybe it seems weird if we talk about it in this present modern era. But we were not always knowledgeable. There are countless natural processes that had made us scared in past. The solar eclipse is one of them. Even in the present time, most of us only know that sudden or gradual shadow is quite normal but they do not know the phenomenon behind it. In this article, we will have a detailed discussion to know the science behind solar eclipse and some of the possible practices that we can practice in this regard.

A solar eclipse happens when a moon moves between earth and sun which fully or partially blocks the solar radiations to reach the earth. It casts a shadow on the earth’s surface. It is only possible when Earth, Moon, and Sun are perfectly aligned in a straight line. The solar eclipse is a very rare astronomical event and is only visible for a limited time.

The phenomenon of Solar eclipse:

As we have discussed above the basic principle is that a new moon comes between Earth and Sun. we are able to see our Earth as bright just because of the solar radiation that reaches its surface. But if a hurdle comes in between then the bright scene can turn dark suddenly. The same happens for a solar eclipse. The new moon blocks the solar radiation and it casts a shadow on earth’s surface. But the moon is not large enough to cover the whole surface of the earth. That’s why you have observed that a solar eclipse is only observed at a part of the earth or in a particular region.

The area also changes during the whole process because the earth and moon are in continuous motion. A moon orbits the Earth but the Earth is also in continuous rotation around the sun. So when the earth will rotate and change its place then this event will end up. Earth will move above the blockage and solar radiations are now able to reach the planet earth. Now the other part of the earth will receive this blockage. So a solar eclipse will also travel from one region to another.

The shadow cast by the moon on the earth’s surface is of two types. One is the umbra shadow which exactly acts like an umbrella. It forms a shape of a long cone that covers the whole part. The solar radiations are unable to cross this black disk. On the upper side, there is penumbra shadow which is quite lighter than the umbra and some of the solar radiations are able to cross it and can reach the surface of the planet.

A solar eclipse is of three types depending upon the extent of shadow that the moon casts on the surface of the earth.

As the name indicates that the solar eclipse will cover the partial earth surface rather than the whole. It means that the penumbra shadow will affect. The penumbra shadow is not as thick as the dark disk of umbra so some of the solar radiations are able to cross it and reach the surface. As the result, some part of the sun remains in view while others become hidden.  In most cases, the shadow will only give a glance to our earth over the polar region. In these circumstances, the places which are away from poles might only see a small scallop of the solar which is hidden by the moon.

In other circumstances, those who are a thousand miles apart from the sun are able to see it. The closer you are to the totality the keen you can observe the scenario. If you are positioned just outside the path of the eclipse then you will observe the sun like a small crescent moon. The whole celestial body will be covered with the shadow and only a part of it can be viewed like a half-moon.

It is a very interesting and rare incidence. The whole event is totally different from the total eclipse so do not confuse it with it. Suddenly the whole sky will be darkened but still, you are able to see the sun in the sky. It is a sub-species of the partial solar eclipse. The event is similar to the total eclipse with a small difference. The difference comes from the size of the moon. It is of small size and remains unable to cover the surface wholly. The moon orbits the earth in orbit at a distance that varies from 221,457 miles to 252,712 miles. But the dark shadow of the moon on the earth’s surface can extend for no longer than 235, 700 miles.

It is less than the average distance of the moon from earth. However, if the moon is at a great distance from earth then the umbra is unable to reach the surface. In this case, antumbra, a continuation of the umbra reach the earth.  Now the skywatchers can observe the side of the umbra or an annulus or a fire ring around the moon. The concept can be understood by the experiment in which a penny is atop a nickel. The penny represents the moon and nickel as the sun in the whole scenario. The total duration of the whole scenario is 12 minutes and 30 seconds.

It is also called the annular total eclipse. It occurs when the moon is at a small distance from earth and the umbra is able to reach the surface. Mostly it starts as an annular eclipse because the tip of the umbra shadow is short for making a contact with the earth. After that, it becomes total because the roundness of the planet reaches up and interacts with the shadow tip near the middle of the pathway. Finally, it returns to the annular eclipse to the end of the pathway. In the whole process, the moon appears to pass through the sun, annular, total, and hybrid eclipse is known as the “central” eclipse. It distinguishes it from a partial eclipse. Out of all the solar eclipses, about 35% are partial; 28% are total and just 5% are hybrid.

Watching solar eclipse can be damaging for the eyes:

Never try to look at the eclipse directly without any protective material. The most sensitive part of your eye, the retina can be damaged by solar radiation to cause permanent damage. And sometimes you may suffer from permanent blindness.

How to observe the solar eclipse safely?

It is common that when news of the solar eclipse prediction is on air, media starts giving us warnings for the sake of protection. It is not required that you are not supposed to watch it. But you can observe with some safety precautions. You can use a pin whole camera for this purpose which is used to form an image on the screen which is placed 3 feet behind the opening. A good telescope or binocular which is placed on the tripod stand can be used to capture the image.

You can also use some of the unacceptable fillers such as old film negative, black and white film, sunglasses, polarizing filters, and photographic neutral-density filers. It is true that these materials have low light-transmitting levels but they can transmit high levels of IR that can cause damage to your eye such as a retinal burn. The sun appears dim and there is no discomfort while observing but there is no guarantee of protection.

You should never dare to watch the solar eclipse directly without any protective eyewear. But there is a time during the whole phenomenon when you can watch safely. It is when the sun disk is wholly covered. It is for a very short duration. In a few precious seconds or minutes, the corona shines in all its glory and surrounds the darkened sun. It forms a precious fringe of the white light. It varies in size and pattern from eclipse to eclipse. The variable appearance may give a sift look or sometimes long rays of it shoot out in four directions. When the sun again starts appearing into view then corona will disappear and you need to protect your eyes with protective material.

A solar eclipse was observed in 2021:

A total solar eclipse swept in Antarctica on 4 December 2021. On the midnight of 4 Dec. at 1:33 a.m. people living in South America observed it. The umbra shadow began in the South Ocean about 500 km southeast of the Falkland and crosses the continent. It ended at sunset in the Southwest Ocean. The eastern edge of the eclipse passed within 360 km of Georgia Island. The path continued across the Weddell Sea.

The solar eclipse has been a horrifying and interesting event to observe for centuries. It happens when the moon acts as an obstacle between the sun and earth. As the result, the solar radiations are unable to reach the earth’s surface and sun appears dark. It may be a partial, annual, or hybrid eclipse depending upon the distance of the moon from earth. You can’t observe the phenomenon by directly looking at the eclipse.

Observing directly without any protective eyewear can put you in danger and in worst cases, you may be blind for the rest of your life. Earth keeps on rotating around the sun so only a part of the earth will face eclipse rather than the whole. Recently, a solar eclipse was observed in Antarctica. It was a total eclipse and observed by the people living in South America.

What is a lunar eclipse?
What are the Biochemical Activities of Bacteria?
To Top