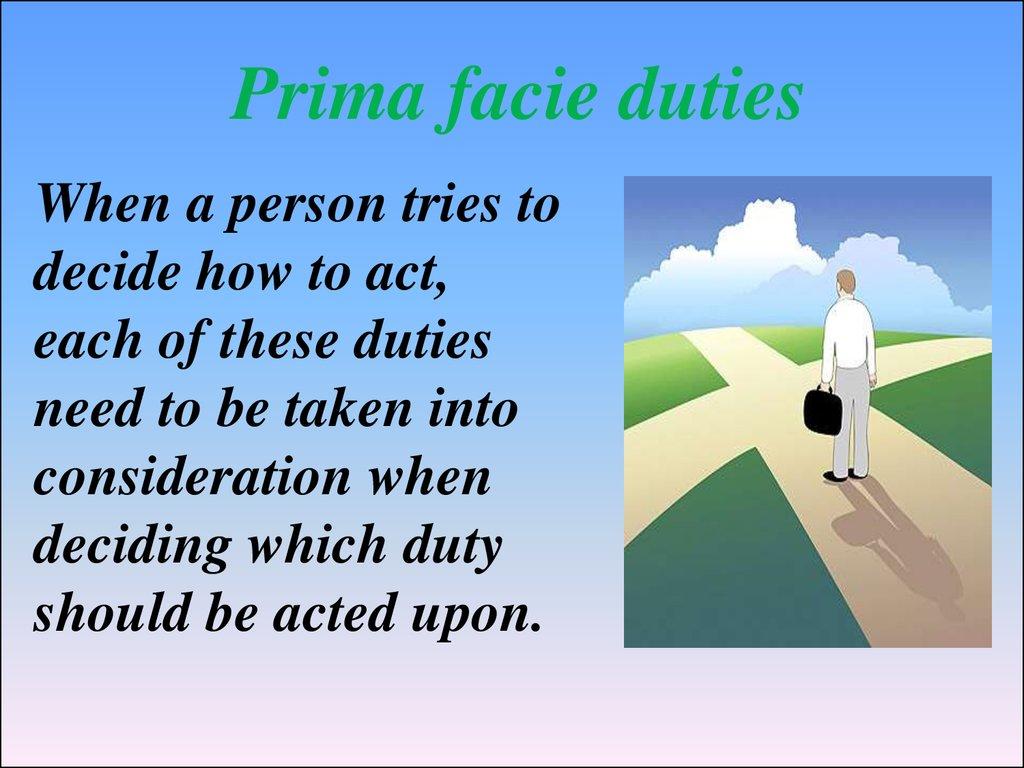 When you meet someone new, what’s the first thing you do? You shake their hand and introduce yourself, right? That’s because it’s part of your prima facie duty to them as another human being to be polite and friendly in that way. But that’s just an example of what it is all about. It is a duty or responsibility that we have to others based on certain conditions, but it isn’t absolute.

A prima facie duty is a moral obligation that may be overridden by other factors, like self-defense. The term means on its face, so these duties are duties we can recognize immediately. Once you understand them, you don’t need to perform a time-consuming cost-benefit analysis to discover what your moral obligations are. You can just do what seems right. However, in some cases, we have multiple prima facie duties. We can understand our rights and obligations according to many different philosophical and religious systems of ethics.

For example, courts often rely on general information about human rights and how people should behave in society to determine what is needed in a person. When determining whether or not an individual has been denied his right to vote, a court might rely on what it believes citizens, in general, have a prima facie responsibility to do so, even though there is no law requiring such action.

We decide each case on its own facts, but here are some examples of prima facie duties. For example, you have a duty not to endanger others. If I stand on a street corner and hold a lit match while wearing a windbreaker, I may well have violated your prima facie duty not to endanger others. The law imposes duties that require us to take certain actions or refrain from doing certain things. If we do these things we commit torts or other breaches of legal duty and may be subject to liability. There are many different types of prima facie duties to whom we recognize by our laws including common-law (judge-made) duties and statutory (law-created) ones.

The relationship between moral obligation and prima facie duty

Duty is a moral obligation to perform a specified action. It may be an external duty, owed to others, or an internal duty, an obligation one has to oneself.

There are two types of duty: obligatory and optional. Obligatory duties are those that if not performed may result in a negative consequence (i.e., fine or punishment). Optional duties are those that do not necessarily involve a negative consequence for nonperformance (i.e., kindness). A prima facie duty is established when there is just cause for acting in a certain way based on what one believes about his or her circumstances. This cause must be sufficient justification for action, but it doesn’t have to be a perfect justification. That’s what we call strict duties.

Prima facie duties are the moral obligation that we have to perform unless some other moral principle overrides them. In everyday language, we refer to these as our obligations or our duties. For example, if a friend of mine asks me for $100 to help pay for rent, I would have a prima facie duty to lend her money. But if I were poor and lived in poverty myself, I might have an overriding moral obligation not to give away my limited funds. One of my two prima facie duties would be stronger than the other and thus morally take precedence over it.

Other Examples of Prima Facie Duties

In every case in which it is not evident what one’s duties are, or which of two or more prima facie duties a person should perform, we can often make some progress by considering further questions. What interests are at stake (or said to be at stake)? If a man owns money from another and runs into him on the street, he may think that it would be praiseworthy for him to force payment out of his debtor immediately.

However, if his debtor also needs money to pay off an unjust usurer who threatens his life and property unless he repays an exorbitant sum within three days. Then there is no prima facie duty for our man to press payment immediately. He ought rather to use other means to aid his debtor in need.

One of your prima facie duties as a parent is to make sure your child has adequate food, clothing, and shelter. But what happens when these needs conflict with other duties? Let’s say you are jobless and can’t afford to pay rent. Is it all right to break into an abandoned house for shelter for you and your family, or would that be theft if you didn’t ask for permission first?

In cases where prima facie duties conflict, remember that principles always take precedence over rules. The principle does not steal takes precedence over providing adequate food, clothing, and shelter. So in this case stealing is wrong even though taking shelter without permission could mean life or death.

A claim of Moore about prima facie duties:

G. E. Moore, who drew a distinction between prima facie and imperative duties, is not correct to say that we never have a prima facie duty to anyone or anything but other human beings. As Hart observes, we can have these duties to animals that are of value to us. For example, we may have a duty to feed our pet dog even when it will be inconvenient for us as long as no one else will do it instead. And while they should take preference over all others, prima facie duties are never conclusive: we should never act in ways that harm ourselves simply because there is no other alternative available.

Prima facie duties are things you ought to do or should do. They’re not full-on duties and obligations, but if something comes up that is in your prima facie duty, it’s okay to do it even if there are other things higher on your list of priorities.

For example, it’s considered a prima facie duty for members of society to obey laws. However, a police officer who has received calls reporting a child abduction happening nearby could say they have a higher duty than other people — saving lives — and justify stopping someone speeding in their car rather than following through with writing them a ticket as would normally be expected in such cases.

How To Write A Short Story?
What is Suum cuique?
To Top