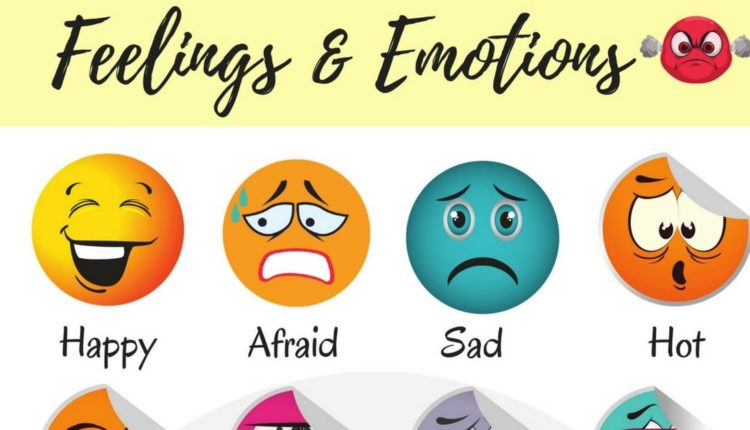 Emotions are the feelings of complex state of consciousness, physical symptoms and behavior that change individual affecting their judgments accompanied by pain or pleasure. Such as pity, anger, happiness etc.

There are many varieties of emotions.

Some are very specific and concern to particular object, person or situation. Other emotions are very general like distress, having joy or depression.  Some emotions are very short-lived and hardly conscious, like burst of anger or unexpected flush of embarrassment. Others are long-lasting like love or festering hatred, are long-lasting maybe lasting hours, months, or even years.

So, there is a vast range of emotions. There are considerable variations even within the same “emotion families”. Fear and panic, for example, are often considered to be kindred emotions. But there is a substantial difference between the panic that is manifested in an irrational fear or a phobia and fear, such as the fear of war, which involves real or rational situation and analysis.

People usually have very limited emotional vocabulary. Its hard to coach those people because they can’t just even assign labels to the feelings that they have in their body in different situations in their lives. Because of this they are unconscious of what is happening in their body and how these emotions are dominating and controlling their lives. So, they don’t have rich diversity of emotions that they are able to feel. They are not really able to talk about the emotions they have which creates problems. In general, most people are quite clueless about what emotions are and exactly how they function.

Studies found that a lot of greatest character traits that correlates with success and fulfillment in life is high emotional intelligence.

Basically, unconsciously emotions run pretty much your entire life. All the stuff you do consciously and rationally, actually its your emotions that are running those behaviors. So, most important element here is that emotions generate behaviors for most of the people. Because of this it creates problematic behaviors and then you can get stuck in these behavior loops which don’t get you the results you want. So, one problem here is that many people are not able to identify the emotions properly. Another problem people have is that they don’t understand the messages of their emotions. Most people don’t know which emotion have which messages.

Its the ability to screen one’s own and others’ emotions and feelings, to differentiate among them and to use this material to direct one’s actions and thinking.

Basically, EI is a group of emotional and mental skills. Thus, all you have to do is to train your mind to train EI and attain those skills. We do that in 3 steps in searching inside Yourself:

All advanced cognitive and emotional abilities are based on attention. Precisely, the idea is to train attention to generate a quality of mind that is clear and calm at the same time. That quality of mind forms the substructure for emotional intelligence.

Use your polished attention to create high resolution perception into your own emotive and cognitive processes. With that, you become able to observe your thought stream and the process of emotion with high clarity. Once you are able to do that, you make the type of deep self-knowledge that eventually enables self-mastery.

Qualities such as compassion and kindness can be shaped as mental habits. For example, imagine whenever you meet somebody, your instinctive, habitual first thought is, “I wish for this person to be happy.” This is the mental habit of kindness and is highly teachable the same way you train other mental habits.

There are various benefits to EI. For example, in the business world, Emotional intelligence has at least 3 persuasive benefits. First, it is extremely correlated with stellar work performance. Studies show emotional abilities to be twice as important as cognitive competencies for doing outstanding work, even among engineers. Second, leaders and managers who are emotionally intelligent are far more effective than leaders or managers with low emotional intelligence. Finally, emotional intelligence creates the conditions for personal happiness. And happy workers are a great strength because they work better in teams, provide better service to customers and are usually more creative and productive.

Difference between emotions and feelings:

Feelings and emotions are two sides of same coins and highly inter-connected. Most people use them interchangeably. But these two are different things.

An emotion can be produced by memory and can often influence your mental state. Emotions are physical and can be measured objectively. Example are blood flow, brain activity, facial expressions and body language. These all changes when we experience an emotion. They are instinctive and interestingly, they don’t vary much between people.

Imagine you are with group of people walking on safari, and you see a lion. What emotions are you likely experience? Probably fear. Everyone else in the group will also experience the same fear. Now, how you deal with that fear and how other people deal with that fear may differ. The purpose of the emotion of fear is to protect you. Emotions do two things, they either alert you to danger or reward. So, it’s either danger or reward. Emotions come from amygdala (part of limbic system). Amygdala is quiet irrational and illogical but very powerful as well.

Feelings is the meaning you give to your emotions. It is a reaction which comes through one of our five senses like sound, smell or touch. Feelings are in our mind. They come from the neocortex which is more logical part of our brain. Interestingly, emotions always come first and feelings second. Feelings are influenced by our beliefs, memories and life experiences. So, feelings are much more subjective. You can’t measure feelings. Feelings require cognitive input. As a result, feelings can vary between different people and in different situation. Person’s personality affects the feelings that they will experience.

Emotions can be very intense, but they are always temporary. For example:

Feelings are much less intense but they can be for long periods of time. For example:

Love or worry, they are both feelings and can be sustained for long periods of time. If someone dies, you experience sadness and this is likely to lasts for few weeks. However, for some people that sadness turns into the feelings of depression which could go on for months or years.

The purpose of this article is understanding emotions. Emotions are complex state of feelings that alert us to imminent danger and prepare us for immediate survival. They give us the energy for fight or flight response. High emotional intelligence is a good trait for happiness and success in life. Most of us are not aware of our own emotions so we need to understand what messages our emotions giving us.

The magical solution for dark circles