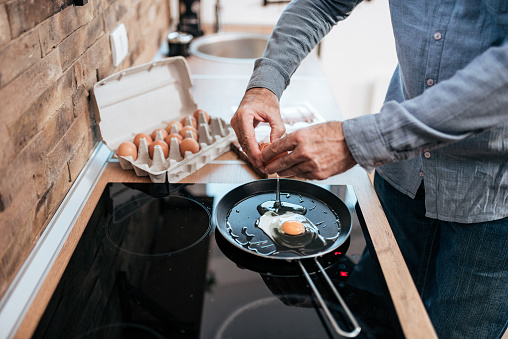 You know breakfast is good for kids in school. You’re always reading advice to women that they should eat breakfast for weight control. Why there is no hype about breakfast for men? We think you’re a guy, you’re busy. You can run on empty, a coffee or an energy drink would be enough. Maybe a donut at the office. Believe the experts it is not! Guys, it’s time to man up and eat a healthy breakfast.

There is a study that states that skipping breakfast is healthy, and it helps in reducing weight. Let’s not exercise this habit blindly. In that study from Cornell University, researchers fed one group of college students breakfast, either high carb or high fiber. While the other group had no breakfast. The no-breakfast group ended up eating significantly fewer calories overall, raising the “to eat or not to eat” breakfast issue yet again.

But the study was very short-term, and it may have missed a larger point, according to David Katz, MD, director of the Yale University Prevention Research Center and author of the forthcoming book Disease-Proof:

In other words, he who makes an effort to eat a good breakfast makes other efforts to be healthy, too.

That healthy breakfast-eating lifestyle may play a significant role in promoting a healthy lifestyle.  breakfast has a surprisingly strong link to heart health. In a recent Harvard study, researchers who analyzed data from nearly 27,000 men found that men who eat breakfast had a 27 percent lower risk of heart attack or death from heart disease. The researchers also found that men who skip breakfast are more likely to exercise less and to smoke and drink alcohol.

In the study experts also found out that skipping breakfast raised heart risks. Even when these habits were accounted for, leading researchers to believe there’s something healthy about breakfast itself or something unhealthy about the larger meals that people end up eating later when they skip it.

What would be a healthy breakfast for men?

So here’s a new mission, against skipping breakfast. Get out of the house on time, with breakfast in hand. Dr. Katz’s meal of choice:

Berries and other fruits, a mix of whole-grain cereals, and non-fat, plain, organic Greek yogurt, packed in an insulated cooler with an ice pack. Eating it later in the morning is fine if you’re not hungry first thing in the morning. Dr. Katz says:

We certainly don’t have evidence that people need to eat the minute their feet hit the floor in the morning, as the folklore has caused some to believe.

•    Cook an egg in a frying pan using cooking spray
•    Place the egg, 2 slices of lean ham, and 1 slice of low-fat cheese on a whole-wheat English muffin
•    Microwave or heat in a toaster oven until the cheese is melted

Bonus: Eating breakfast kick-starts your metabolism. Which slows down overnight and stays slow until you eat again, says Palinski-Wade. And it will make that donut at the office look less like a breakfast choice and more like the sugar and fat bomb it really is. Real men eat whole grains.

﻿Childhood is the father of man